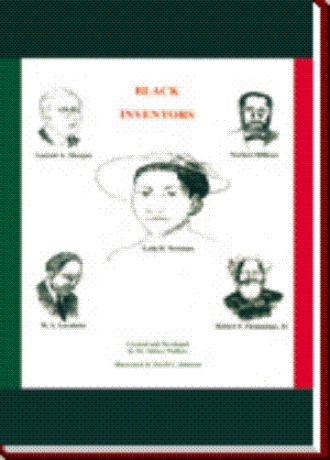 The light switch as we know it today derived from this early invention by Granville T. Woods. This invention enables us to turn electric lights on and off. Granville was the father of many inventions: the relay-instruments, telephone system and apparatus, the railway telegraph, roller coaster and steam boiler furnace, etc. He is credited with 22 inventions.

If you ever heard the expression, the "Real McCoy" and didn't know how it cam to be used or what it was associated with, it was the pioneering work of a black engineer named Elijah McCoy. Elijah invented the automatic lubricator. This is a device that is used to lubricate the axial of trains, trucks and cars and vehicles employing air brakes. Factories everywhere were investing in McCoy's lubricating cups, and they would always ask the question, is this the "Real McCoy"? They would not accept a substitute. This invention is the forerunner of all lubricating devices that are used in vehicles today.

was written to generate a state of awareness among all individuals regarding contributions made by Black Americans to this society. The book contains the images of black inventors, the drawings of their inventions, and the dates of patent numbers, with brief captions of each invention. This book is not intended to give an in-depth history of the inventors and their inventions but to provide general information and serve as a reference tool. The book is easy reading and provides just enough information, hopefully, to facilitate further research.

Sidney Wallace was born outside of Memphis, Tennessee on a farm in Tunica County Mississippi. He developed an interest in writing songs while in elementary school and later during high school where he crossed paths with Ike Turner of Ike and Tina Turner fame. Sidney began writing songs for Ike. Ike was a native of Clarksdale, Mississippi, just a few miles from where Sid was born. Ike soon left Clarksdale and moved to St. Louis leaving Sid to seek other outlets for his musical interests. Sid had a variety of interests while growing up, such as becoming an inventor, a musician, a writer or an actor. Within days after Ike left Clarksville, Sid turned his attention to Memphis, where he met Rufus Thomas and Otis Redding, and became a co-writer at Stax Records with the then-not-so-famous Hayes and Porter song writing team, which consisted of Isaac Hayes and David Porter. This also provided Sid with the opportunity to exercise his talents as a stand-up comic and musician. He performed at many of the clubs in Memphis supplementing his income while attending college. He did impersonation acts of well-known celebrities. This continued until Sid moved to St. Louis to further his educational career. In spite of all the career interests he had growing up, deep down inside he really wanted to be a teacher. Therefore, he enrolled in Harris Teacher College. He felt a need to reach back knowing that this was one of the best ways to be of service to young people. Seeing so much poverty in his hometown while growing up, he desperately wanted to make things better. He correctly perceived that one way for poor young people, especially young black men, to be successful in life was to get an education, be creative, talented, productive and learn to manage and control their resources. Sid states, "One has little or no control over natural talent or creativity, but with an adequate education, we can master all the requisite skills for success." Dedicating his life to reaching his dream while helping youngsters to reach theirs, Dr. Sidney Wallace has served as a teacher and junior high school principal in St. Louis, Missouri and now serves as an elementary school principal in Cedar Rapids, Iowa.

He credits his mother for much of his success as an educator and writer by allowing him the flexibility to choose his own career. He never felt the vicarious expectations from his mother when it came to his career decisions; she only wanted him to get an education. She was an exceedingly creative individual, recounts Sid, "Always developing, and exploring her ideas, grinding out innovative ways that enabled her to support herself." Her strength and ingenuity have been a wellspring of inspiration for him even today. It was his respect for her accomplishments that led him to explore and become fascinated by the accomplishments of other African-Americans. What began as a leisure pursuit quickly developed into a mission to make the voluminous achievements of African-American inventors more accessible to the public, particularly young adults. He felt the best way to make this awareness accessible to young people would be through the publication of a Black Inventors book. Dr. Wallace states, "It has been a delightful journey in the development of this project and I am very happy that it is completed and hope that it will encourage young people to develop their talents and show appreciation for the contributions of Black Americans."