Sophia's Web: Understanding the Unity and the Diversity of Religion,Science,and

by Burl B. Hall 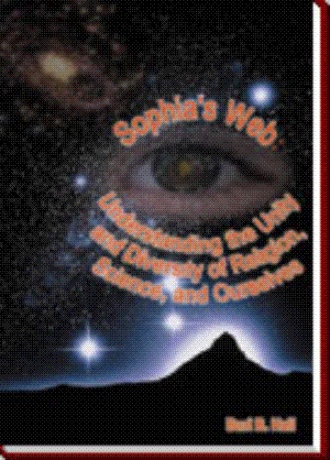 Beyond this world of time and space, Mother Sophia stands alone; complete unto Herself. Sophia is not anything or anybody. She has no characteristics at all. She just is. Sophia is Unconditioned Existence; pure Being; or the Nature of all that is. She is Truth for She is the Essence of all that lives. She is our beloved Virgin whose beauty is incomprehensible to human imagination. After all, who is there in this vast universe that can describe, or comprehend, Infinite Wisdom? Any attempts at conceptualizing Sophia will fail, for She is an unfathomable and shoreless Ocean of Life whose depths are without beginning or end. She is an ineffable and unthinkable Silence beyond sense, perception, or thought. Formless and void; Sophia is the great Abyss who exists as a dazzling and translucent darkness outshining all the suns in the visible skies. All these surface structures are mere shadows of Her Infinite Light; Her timeless Consciousness.

In the beginning, Sophia envelops everything in a formless state. Through an impulse of Love, She envisions the form of all creatures. She dreams of swirling galaxies, dancing planets, flying birds, beautiful animals, and thought-provoking people. All these creatures express Sophia and Sophia expresses all these creatures. In awe of the beauty of Her dream, Sophia becomes desirous to give expression to the infinite variety of creatures and characteristics She holds within. The dream arising from Her depths sings. He is a beautiful Harmony whispering in Her ears. The dream is Her baby and She calls Him 'Light'. Sophia becomes intoxicated by the Wine of Joy. In Ecstasy, She 'hums' the Song of Creation to Her dream children. By Her Voice, She forms them. With a tender kiss, She seduces them into awakening as the Universal Dance.

Sophia's Song is radiant and beautiful. He is the Light of Her dream, and He nakedly dances before the Mother. Sophia loves, worships, and adores Him. Her entire body vibrates with the beautiful harmony of Her Son, and the unborn beings She contains within begin to form. She dances wildly and swirls about in ecstasy. Her womb thrills; Her body swells; She cries out in the pain of Joy. Her entire body shakes at an intensity beyond the experiences and fantasies of the human mind. Finally, with one massive thrust, Sophia's children burst from Her thighs like water exploding from a ruptured dam. Swirling galaxies, spinning planets, explosive stars, beautiful plants, powerful animals, and curious people begin to form as they erupt from the Mother.

The entire universe dances and swims in Joy. It is alive. It is majestic. It is the expression of the unfathomable Sophia. Everything forms in worship of Her, in accordance to Her command. Human women form in imitation of their Mother. Men form in imitation of Her Son. It is a beautiful dance. Everything fits; everything works perfectly; everything dances in unison. Every creature is a symphony arising, growing, and dissolving within the Oceanic Presence of the Beloved Sophia. Nothing dies; nothing ceases to exist. There is only a return to Sophia. Her children love Her and call Her by various names. No matter what names they call Her: She is their Mother; their Source of Life; their eternal resting Home.

The universe is akin to a multi-dimensional cube. Each point in the universe mirrors and reveals itself as every other point. Enveloped within this mind-set, I wrote my book: Sophia's Web: Understanding the Unity and Diversity of Religion, Science, and Ourselves.

This is a book where Science, Christianity, Judaism, Atheism, Buddhism, Hinduism, and Native Spirituality become various faces of one Divinity. 'Sophia (Wisdom) is multi-faced,' the Bible says. There is unity in diversity and diversity in unity.

This 'multi-dimensional cube' vision of the world reflects more than the unity of diverse religions. It is a view encompassing all. In my book, sexuality becomes a manifestation of eating, and eating becomes a manifestation of cognition. 'Your words are food for thought!' Words fertilize (are seminal to) the Psyche and serve as an impulse (Eros) to the birth of new ideas, thoughts, attitudes, etc. Mommy eats Daddy and here we are. The Earth absorbs a decaying tree (mulch), couples with sunlight and generates new life. Same idea. Human sexuality mirrors universal processes. As above, so below.

The beauty of all this is that we are the process. Our individual lives are a facet of the multi-dimensional cube that is a unity. To illustrate this, I use personal experience to show how my life fits into ancient spirituality and modern day quantum physics.

In reading my book, I hope you will re-awaken to what you have known all along. You do not live in a cold universe where your human characteristics exist as aliens. As a child looks like his mommy and daddy, you mirror the All. There is this beautiful Pagan myth where the Goddess sees Herself in a mirror and falls in love with Herself. She then waltzes over to the mirror and kisses Herself. The image then bats Her eyelids, and flutters away from the Goddess. Eventually, this mirror image becomes the created world and forgets who She is. I sincerely hope in reading my book you will re-discover the original kiss given by your Mother. As I will show, it happens always and now. Who else could this mirror image be other than you? This is the message to my book. Read and discover how.

Burl's interest in the Goddess has been life-long. Even as a child, he had a deep love and awe for Her. This love is eternally passionate. Burl describes it as a longing for Home. This passionate quest for Home has included visions of the Goddess as a five year old, and a falling in love with Her as Athena, or Wisdom, at the ripe age of seven. Intuitively, Burl realized Wisdom as a Woman because She gave birth to Thought. This idea simply made intuitive sense to him and became the impetus for his philosophical speculations on gender.

In the spring of 1992, Burl began having a series of dreams in which his childhood Goddess-friend reappeared. He realized the Woman whom he saw in the dreams was the Goddess. Indeed, he realized it was She who created the dreams and Her image. The image became realized as a projected form serving as a metaphor for a power that had no form. IMAGE DESCRIBED FUNCTION. These dreams and their meaning were the fathering impulse to the birth of his current book, Sophia's Web.

Burl has never felt any particular religion was right, or THE WAY; including his own. The Way for him involves creative process and not dogma. As such, it became a driving force for him to realize the unity of all religions. This unity he knew intuitively in his heart. It had been within him forever. In this, it appeared to Burl that all knowledge hides away within us, awaiting discovery. It was this idea that attracted him to the physics of David Bohm and his theory of the Unmanifest Implicate Order. What has yet to unfold in our surface minds awaits birth from within its Implied State existing within us. In Burl's mind, this idea fit into ancient ideas about the Goddess. Physics had married the Goddess. His book is the celebration of this marriage. Want to join in the festivities?