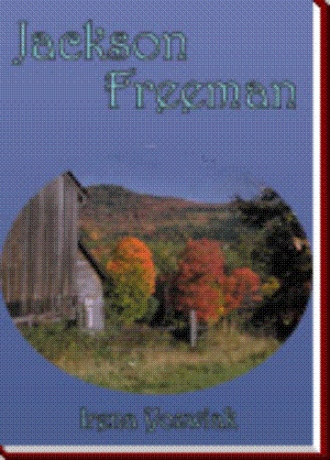 The men of the congregation filed out of the double doors of the church and stood around in small knots not knowing what to do or what action to take. The worshippers from all the other churches were now rushing out of their pews to mingle with one another. They were frightened. The children, sensing great danger, clung to their parents but throughout the turmoil and the wail of the fire wagons, there was no panic. Two more crashing sounds alerted the Freemans, still on the landing of the stairs, that something was terribly wrong. Jackson wanted to get his family home as quickly as possible so he could find out what the trouble was. 'What do you think is happening?' he asked Pappa. Winfield looked confused. This bothered Jackson. 'It's all right. We are all safe here.' Winfield held on to Nola. She was not aware of anything that was going on, she was happy to have Winfield hold on to her arm. Jackson turned to Clarabelle, 'Take the children to Mamma's house. Wait for me there.', he said as he buttoned up his coat and jammed his felt hat on his head. 'I'll be all right,' he consoled her when he saw her ashen face. Clarabelle gave him a look of disgust which he did not understand. Jackson motioned to his brothers to follow him out into the street. It was because of the storm, Sunday School was cut short and the service ended early but, Jackson was not prepared for the twenty-five mile an hour wind that hit him as he walked out of the church. He and his brothers joined the people milling about. Another tremendous explosion stopped the people dead in their tracks. Everyone looked at each other questioningly. The third explosion wired Jackson into high gear, 'C'm on! C'm on!', he shouted as he started for the docks where he surmised the explosions were emanating. He thought, 'German Street?' He would make for it. That is where he made his livelihood so, he better find out what the trouble was. Jackson made straight for the streetcar, already filled with parishioners from other churches. Eager hands helped Jackson on board. Black or White, did not make any difference in times of emergencies. As the car entered the heart of Baltimore, everyone became aware of the smoke curling heavenward melding with the clouds. Flames were twisting and writhing with the cold wind. Smoldering debris of cinders and pieces of blazing wood rained down on them. People were running in every direction. The car stopped. The heat was intense. They could get no closer to the raging fire. Jackson was right. It was German Street. But what to do? It is times like these that strange thoughts come. Jackson looked down at his new shoes. Too late to think of anything. He ran to a group of men who were getting organized for some kind of action. He recognized Mayor Langly, who was delegating some men to lead groups of men to do specific assignments in order to avoid over-lapping responsibilities. Langly was well liked by the Baltimoreans. He had easily won the election and he did not disappoint the people. Jackson watched him from a short distance. Two of Jackson's dock buddies joined the group, giving Jackson courage to walk over to them. 'What happened?' Jackson asked.

An explosion! Downtown Baltimore was burning. Jackson Freeman depended on the docks for his livelihood. Leaving his family in the hands of his mother, he and his brothers fought the flames for twenty-seven hours. Realizing the hopelessness of the situation, Jackson gave in to his exhaustion and arrived home only to be told his whole family had expired from a horrible illness.

To rebuild a life for himself, Jackson sought out his German friend Carl to begin what they had dreamt of together, owning a farm in partnership. Now, Jackson could be independent from the White man. Unfortunately, Carl saw a greater vision, and had already begun a more lucrative automobile 'fix-it' shop. As Jackson saw Baltimore beginning to rise from the ashes, he was even more determined to finally do what he had always wanted. He would go for it alone. Besides, he had heard land was cheap in Ohio.

While on his way, Jackson hooked up with some shady characters who offered him a 'partnership' in the sale of the goods they were taking to Stanton, Ohio in exchange for his money to buy a horse for their oversized wagon. Unfortunately, an axle problem kept them from their destination and they turned their wagon into Anna Shein's farm. There, Jackson came face to face with his destiny: meeting the White woman he would learn to hate, the woman he would grow to respect and the only person who could teach him farming. Through their years together, their trials and tribulations were many. Even though a love/hate relationship developed between them, Jackson's drive and perseverance won Anna's respect. Were they really in love?

Irena Yozwiak is a native of Ohio. Both of her parents emigrated from Poland. Much of what she remembers from her childhood was of the Great Depression. Money was nonexistent and times were difficult for everyone.

During the late 1940's, Irena began acting in the community playhouse, where she met her husband. They both studied under Arthur Sircum, who had been associated with Gertrude Laurence at the Cape Cod Playhouse. Raising her daughter and caring for her husband kept her home but she did do some painting. It was in 1987 that she began to put pen to paper to tell a story that had been told to her about people who had lived at the turn of the Century.

Much of Jackson Freeman is historically correct. Irena researched extensively in Baltimore to learn about the 1904 fire as well as hospital practices during that time.

Once she began to write Jackson Freeman, her fictitious personalities took on lives of their own and helped her tell a story filled with the warmth and love of her characters.