Where Do We Fit In? 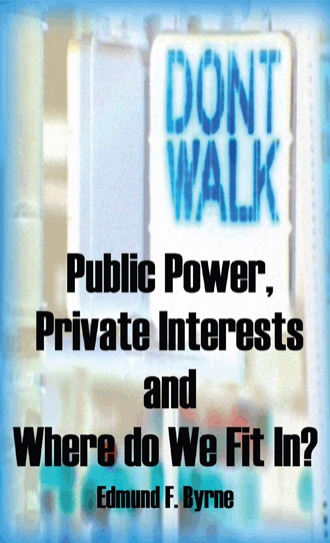 Public power is one of those things we can't live with and can't live without. It is, as they say, a mixed blessing, a necessary evil. And because it is such an ambivalent aspect of our lives, we devote a lot of time and attention to devising rules and envisioning strategies that accentuate the positive and insofar as possible eliminate the negative with regard to public power. Strategies take many different forms, ranging from palace guards to postage stamps, and rules embrace just about every imaginable kind of interaction between public power and the people for whom it is, or at least should be, used. How these rules should be constructed is, in turn, the subject of theories and of disputes among theorists. One of these theories, clearly one of the most basic in the twentieth century, has to do with the relationship between the public and the private, and the public/private distinction they presuppose. Once a major bone of contention between communist and capitalist theorists, this distinction had become by century ‘s end something of a shambles, as either system's long held assumptions about what functions belong where proved no longer persuasive to those who make rules and devise strategies. Then in the United States, its presumed obviousness came to something of a symbolic head and its potential for absurdity became manifest in a meticulous but highly partisan rule-following exercise at the very pinnacle of government. This all began with the discovery that the President of the United States had had an extra-marital affair, developed into an impeachment trial, and in the process it undermined just about every preconception about the boundary between private and public.

The public conversation about Clinton's affair focused on a traditional morality according to which monogamy and marital fidelity define the parameters of sexual activity. Widely accepted in principle, this standard of conduct is strongly endorsed by conservative groups, in particular, fundamentalist Christians, whose beliefs have been politicized by such interest groups as the Christian Coalition. Bracketing the more compassionate and forgiving aspects of Christian teaching, President Clinton's opponents focused on his apparent indifference to the marital fidelity paradigm in his personal life. For, they contended, one who holds high office must not only support the moral values of the people, but must exemplify them in his or her personal life. A political corollary of this contention is that failure to be a good example invalidates the exemplar's entitlement to hold public office. Often applied to presidential candidates in the past, the politicization of private sexual behavior had never been used to unseat a duly elected president. Before Clinton, in any event, sexual misconduct was never used as grounds for impeachment. Perhaps because better evidence was available in this case than in that of any past president, Clinton's claims to privacy and confidentiality were largely overlooked as partisan interests transformed collective voyeurism into a constitutional morality play.

The morality play that led to impeachment also made manifest how severely a public sphere can undermine a private sphere. By stretching the legal concept of a rule of law to link morality and politics, it collapsed the once honored distinction between private law and public law. It turned preconceptions about grand jury and even psychiatric confidentiality into easily rebuttable presumptions. It showed how vulnerable to exposure are both personal choices (decisional privacy) and what others may know about a person (informational privacy): people debated not whether but which of the two President Clinton had waived by his actions. Thanks especially to the media's quest for audience share, it reduced the venerable political concept of the public interest to a synonym for gossip and that of privacy to a privilege that can be withdrawn at any time. A woman who secretly taped her telephone conversations with the President's paramour and handed them over to a grand jury seemed to agree. In so doing, she and others gave a new and unintended meaning to the once unqualified feminist slogan that the personal is political.

As originally formulated,'the personal is political' helped carve out a place for women's liberty in direct opposition to unfair patriarchal assumptions about domestic relationships. Now, however, some defenders of personal liberty realize that this slogan is a two-edged sword. For, it implicitly invites minute examination and public controversy about the scope of a right to privacy (Boling 1996). One may try to limit intrusiveness by drawing a line somewhere; but any line beyond which privacy prevails is open to challenge. Problems experienced in private should, on occasion, be subject to legal review. But few will support a total surrender of the private to the public. In the wake of the 1999 impeachment trial, in particular, some political leaders may want to strengthen statutory protections of privacy even as they contemplate ways to enhance the constitutional separation of powers their actions have compromised. Meanwhile, we can learn much about our society by reflecting on how we use the public/private distinction, what values we think it protects, and why. And in so doing we will come to appreciate just how vulnerable is a right to privacy that focuses on individuals and trusts institutions to show them respect.

A first step in this direction is to recognize that privacy is not of interest only to individuals; for, even institutions claim privacy rights. For example, when criticized by a newspaper for moving its plant out of the country, a small engine manufacturing company sued the newspaper for having invaded its privacy, and large American corporations contend that the European Union's consumer-favoring electronic data privacy standards violate their privacy. A misuse of language? Not at all. Language mirrors social reality, and one reality in modern society is the power and influence of dominant institutions. This suggests that government, even in a constitutional democracy, cannot be counted on to give individual privacy a high priority. Corporations, though, can usually rely on government to be attentive to their needs.

Business interests help define how we should understand privacy, just as they do with regard to privatization. As this suggests, moreover, privacy and privatization are linked, partly because the meaning of each includes a reference to political power as cause of and/or cure for a complaint its claimant has. ‘Privacy' involves personal autonomy and information that government should both respect and defend. ‘Privatization' as usually understood today, involves property dissociated from government. Also privatized in the past, however, were women, various ethnic groups, and religions. Religious institutions were divested of much of their property as well as their ties to power; and until recent times, descendants of slaves as well as women had neither. The privatization of religion is extolled as a corollary of government neutrality; and both welfare and philanthropy are privatized for analogous reasons. So privacy and privatization cross paths by virtue of their common distancing from government . Later in this chapter, I will discuss in more detail how this distancing is defended. First, though, I want to spell out a number of privacy-related considerations that will be expanded on in this book.

This book is about privacy, not all itself but in a context that includes such thing as the public/private distinction and privatization. The author is trained in both law and philosophy, and draws on both fields (as well as others) to show how society favors public power over personal and interpersonal privacy. Noting how public power in United States is dominated by business interests, the author urges people to develop and participate in organizations that can make participatory democracy happen, thereby changing the power relationships in our society. To make this case he first discusses learning to live with public power. Then, two chapters are devoted to analyzing how and why theorists have separated the private and public (Part One). Three chapters explore how business interests have co-opted public power, especially by buying public officials and benefiting from privatization (Part Two). Finally, three chapters describe how people, including especially women, are learning to share public power. In this timely analysis of the place of privacy in a world dominated by public power, Byrne shows ample respect for privacy but more for grass roots organizations, in and through which people look after their best interests collaboratively. Along the way, he takes time to criticize individualistic versions of liberalism and to defend what some call discourse ethics.

Edmund F. Byrne has earned doctoral degrees in both philosophy (1966) and law (1978). He was a Fullbright Scholar in Belgium, 1963 - 1965, and a Research Fellow at the Centric for the Study of Democracy. University of Westminster, London, England, 1996 - 1997. Dr. Bryne has published four books, as well as numerous articles and book reviews. His best known book is Work, Inc.: A Philosophical Inquiry (Temple University Press. 1990). This book, like many of his articles, examines the impact of technology on people's lives. He taught philosophy for over thirty years, mostly at Indiana University-Indianapolis, and served as department chair for eight years. His principle areas of teaching were social and political philosophy, philosophy of technology, and ethics. Now retired from his university position, he is Section Editor: Work for The Journal of Business Ethics, and is a volunteer Legal Intern the Senior Law Project of the Indianapolis Legal Services Organization. He has a son and a daughter, both married.