The Other Side of the Envelope 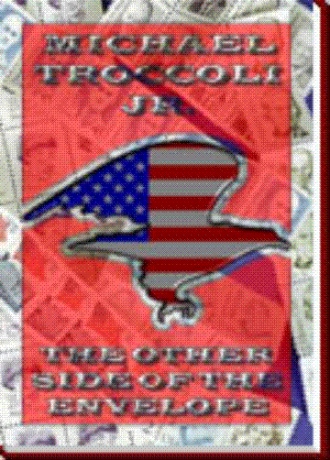 The palms and fingers of both hands were dry, cracked and sore. They turned downward and submerged into the shoreline waters as a seagull's cry bellowed. The sun's rays illuminated the hands as they laid a few inches under the mild surf of the Gulf of Mexico. He felt the salt water have an instantaneous healing effect on them. 'Michael, what are you doing, lets change and go swimming,' said a female voice in the background. Oblivious to it he remained by the waters edge crouched in a catcher's position wearing his black jacket and blue jeans. The sun's heat radiated on his jacket but it felt good, as well as the smell of the sea in the air. Mesmerized, he admired a brown pelican that glided past him just inches off the water. 'Michael, did you hear me, let's go to the hotel and change!' The voice was now  more coarse as he stood still looking out into the Gulf.

The buzzer of the alarm clock woke him from his dream, he reached from bed to shut it, the digital clock read 5:30 A.M. He rose wearing boxer shorts and a white tee-shirt, the bedroom illuminated by a blue night light. Exiting the bedroom he past a haphazardly hung U.S. Postal Service Letter Carrier uniform pants and shirt on the door. He pulled the bathroom light cord, it clicked on straining Pinochi's eyes. He looked at the mirrored medicine cabinet's reflection. He was tall and slim with short black curly hair beginning to gray, deep set mournful brown eyes, a long roman nose, trimmed mustache and a dimpled chin. Pinochi stared at his reflection, suddenly it moved independently and spoke. It's voice taunting and cynical with it's evil grin. 'Hello sperm! Hey, where's my check? He don't bite! Through rain, sleet and snow, no bills just checks- ha ha ha ha!' Frozen in fear at the speaking reflective image Pinochi stood there. Suddenly the mirrored image's face leered at Pinochi, an arm extended out of the mirror and smacked him hard across the face. Impulsively he closed his eyes, the force of the blow threw Pinochi back. He quickly reopened them but Pinochi found his delusion gone. Gaining his composure he slowly shook his head and opened the medicine cabinet taking out a prescription bottle. He took one of the yellow valium pills, popped it in his mouth and chewed  while closing the cabinet. Pinochi leaned forward and turned on the cold water faucet, cupped some in his hand and washed down the pill. His eyes cautiously glanced up at the mirror but only his true reflection was seen. 'Your fucked up Pinochi', he mumbled to himself in the mirror.

It was a sunny Autumn day in the small New England town. The fall foliage was in full bloom. Seven-year-old Timmy Peters was gazing at the few scattered white billowing clouds through the trees trying to see imaginary figures from there formations. He held a letter in one hand and a dog leash in the other. Collared to it was his black and white terrier, Zoe. After a momentary pause Timmy walked towards the U.S. Mail blue collection box located at the end of the block. He looked down at Zoe as he stopped in front of the box. 'I hope Grandpa gets this letter before he turns into an angel and flies to heaven,' he said to Zoe. On the left side of the envelope Timmy had crayon drawn an angel. He smiled as he admired his own artistic handiwork. The fair-skinned boy with hazel eyes and light brown hair had nearly spent the entire Saturday morning at his home, writing a special prayer letter for Grandpa. His mother had looked on, trying to hold back her tears.  Her father, Timmy's Grandfather had been diagnosed with terminal prostate cancer. Although she visited her father daily, she feared his frail weakened condition and appearance would affect Timmy in a negative way. She had told her son that Grandpa was in a special hospital waiting for worker angels to make a pair of wings for him for his trip to heaven. Actually, Timmy's Grandfather was in Crucifixion Hospital in the Bronx. It specialized in the care of terminally ill patients.  Timmy opened the mail collection box flap and carefully placed the letter inside while the dog's urine stream splashed off one of the four legs of the box. 'Zoe!,' yelled Timmy, 'don't do that!'  The dog grunted as Timmy bent down to pet him. The child then stood and turned to walk back home. When the boy and his dog were halfway down the block a white U.S. Mail steptruck turned into the street. Timmy looked in innocently at the blue postal uniformed Caribbean-American driver.  The driver noticed the child watching him and yelled cheerfully out the opened slide door of the truck with a heavy Caribbean accent, 'hello little white boy!' As the postal collection driver reached the end of the corner he placed the truck in park and pulled a key out of his right pocket which was attached to a long chain buckled to his pant's belt. The driver opened the blue mail collection box and removed the mail from it in a white milk-crate sized plastic tub.  While the driver relocked the box he noticed the little boy still gazing at him. The postal driver began to wave as Zoe growled and broke free. With the strap bouncing off the pavement the dog barked in a continuous foray while rapidly approaching the man. 'Shit man, that dog crazy,' said the driver in panic as Zoe closed in on him. The driver darted into the truck, slammed the sliding door shut and quickly pulled away. Zoe stopped at the collection box still barking. He stood at attention and stared and the fleeing vehicle then smelled the blue collection box leg and urinated on it once again. Timmy ran up to his dog  grabbed the leash and walked back up the block. The boy and his dog entered the front door of the well-kept white colonial style home as his mother noticed him from the kitchen. 'Did you mail the letter to Grandpa?' 'Yea Mom,' answered her son, 'and the mail truck picked it up right after I put it in the mailbox!' 'That's great Tim,' shouted his father who was sitting in the living room, 'now come here and watch your old man on T.V., I taped it for you last night.' Timmy stood by  the sofa next to his dad. Timmy's father shouted angrily as he watched his own image on the television. 'Why didn't someone tell me my hair was out of place!' Cliff  Peters was 30 years-old, slightly overweight, vain and nerdy. His neat black hair was fumigated daily with hair spray and was as stiff as a diving board. He had just gotten a promotion as fill-in anchorman for a local Connecticut T.V. station and saw himself as a young Walter Cronkite. In reality Peters was inept, pompous, and conceited. In the living room pictures of Walter Cronkite, Peter Jennings, Tom Brokaw, and Dan Rather were hanging on the wall behind the television. Right in the middle was a larger picture of himself sitting in the WBST News anchor desk. As the T.V. emitted his droll monotone hamish voice reciting the news Timmy's father pointed to the wall enviously laughing. 'Tim, one day your old man is gonna be bigger than all those talking heads.'

This fictional novel centers around the working and personal life of a U.S. Postal Service letter carrier, Mike Pinochi, a middle-aged man who feels trapped and tormented with his career and life. He is in a mid-life crisis, on the borderline of insanity, realizing not only the world's hypocrisy, but also his own. Pinochi is plagued with nightmares, visions and painful past memories. His wit and dry satire, aided by Valium and alcohol are the loose threads that keep him in check.

The post office station where he works has a variety of strange and eccentric characters. All are unaware that Westwood P.O. will soon become the focal point for a fame hungry TV news reporter and a politically ambitious postmaster general. Tensions rise in the post office and any one of the postal employees could GO POSTAL at any time.

Troccoli is a 14 year employee of the U.S. Postal Service and his positions as letter carrier, union steward and supervisory trainee have been useful as a reference in this literary work. He attended New York Institute of Technology, Old Westbury, N.Y. and later attended Lehman College in Bronx, N.Y.

This is the first of three literary works. The second, a compilation of poems, is entitled Poems with Suicidal Tendencies and the third, Monsterhead, a novel about a New York City policeman and his adopted pit bull, are currently seeking publication.