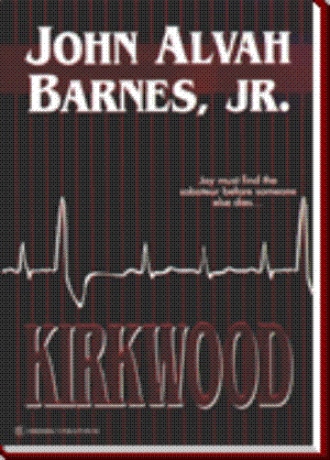 a sample from Kirkwood

I headed downstairs to the shop. As I walked through the darkened corridors I marveled, as I always did, at the almost sleeping giant that was the hospital at night. I could hear a vague deep rumble, more of a vibration really, coming from some unidentified area in the bowels of the hospital. It was as if it were lying there with one eye open, ready to pounce at the first provocation.

I rounded a corner and abruptly stopped. Before me lay a two hundred-foot hallway that ended in a corner which opened onto another long hallway. At night the fluorescent lights were turned off and incandescent night-lights were turned on. The night-lights were spaced farther apart than the fluorescents, and they cast shadows on the painted cinder-block walls. In the middle of the hallway at the next corner, stood a person in partial shadow. In the dim light at this distance I couldn't tell who it was, or even if it was a man or a woman. It was not unusual to meet someone in the hallway regardless of the hour, but this person stood completely still, staring in my direction. It was the sheer eeriness of the situation that caused me to stop and stare myself, reaching into the back of my mind for some explanation as to who this person was and why he or she would be staring at me like that.

We stood for a few moments facing at each other, not a sound to be heard except for the building's vibration, that deep-throated hum that pervaded everything. With a slight uneasiness I began to move forward to see just who it was that was watching me. Suddenly, the figure turned and rapidly moved to its right down the next long hallway. I moved as quickly as I could to the next corner, tightly gripping the ophthalmoscope so as not to drop it. I reached the corner and peered around the edge of the wall, down the next hallway. Nothing. It was empty. The doors that opened onto this hallway were all closed, and I hadn't heard any of them shut. Because of the type of doors and locks they had used here, you could always hear the doors close and the locks click shut. I had heard nothing. I turned left and walked along the hallway trying doors as I went, all locked...except the last one on the right which was marked 'Stairs'.

I had never been through this door before. There was no window in it as there was in many of the others along the hall, so I couldn't see if the person was on the other side. I slowly pushed it open and stepped into the stairwell. Unlike the other stairwells in the hospital this one had no stairs leading up, only down into darkness. I could see because the stairwell was lit; though dimly, by a small light recessed into the wall behind wire mesh. It appeared to be some sort of a service access, because the walls were unpainted, and there was no ceiling overhead. Pipes and wires crisscrossed the space over my head and disappeared into holes in the bare cinderblock. I thought about going to look for a flashlight, but my curiosity was making me impatient, so I began to descend the stairs.

The low rumble, barely audible above, was growing louder as I slowly moved down into the gloom. There was a dampness in the air that I could feel on my face, and a slight musty odor came to my nostrils. I clung to the railing with one hand, descending one, then two flights of stairs. The light decreased with each step, until it was dark.

As I came to the bottom I could see a dim glow off in the distance to my right, so I began to cautiously move in that direction. I abruptly banged my knee on something cold and hard, and cursed as I nearly dropped the ophthalmoscope. I reached out and traced the object with my hand until I found the edge; it seemed to be a large metal box. Moving gingerly around it, I continued toward the glow, which was becoming brighter as I moved closer.

My eyes were becoming used to the darkness, and I could tell that the light was coming from the other side of what I determined were large cabinets. I moved around the end-most cabinet and peeked around the corner.

There was a single naked light bulb hanging down from the exposed pipes and wires overhead, and it swung ever so slightly from side to side. Underneath the light was an old wooden crate turned upside down and on top of the crate were two screwdrivers and a pair of needle-nosed pliers. I took a step closer to the crate, and in the next instant I heard a slight sound, a sudden intake of breath, and I was immediately aware that there was someone behind me!

I was violently pushed from behind before I had a chance to react and went reeling forward, the ophthalmoscope flying off in another direction. I hit my head on the way down, and saw stars as I heard footsteps fleeing in the direction from which I had just come. I shook my head to stop the spinning and pushed myself to my knees. I rose unsteadily to my feet, then, gathering my wits as quickly as I could, I began retracing my steps, soon coming to the door which I had first entered from the hall. I tried the handle; it was locked. Then the light went out. I hadn't heard it break or a switch click off.

I stood for a moment in the darkness wondering what was going on and wondering what the hell I was going to do now. I had no idea what the layout was down below, and the only illumination down there was from that single bulb that was now gone. I tried pounding on the door for a few minutes, but it was a heavy door and I doubted that the sound carried very far. I also had no idea when security made their rounds down here in the middle of the night. After a short time my hand hurt, and I decided that the best thing to do was to go back downstairs and look around...or actually, feel around, as the case was.

I groped around on the floor until I managed to locate the ophthalmoscope, which amazingly didn't seem to be damaged and then cautiously felt my way back to the wooden crate with the tools on it. Just what had I stumbled on? Who's little work area was this? Who had I seen in the hall, and who had pushed me down? The whole scene seemed unreal, and I felt detached from it as if it were something that I had dreamed. 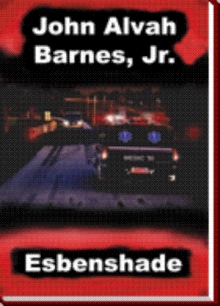 Jay must find the saboteur before someone else dies...

Code Blue! Kirkwood Medical Center electronic technician Jay Barlow knows about Life-and-death emergencies--he just never imagined that he'd be in that situation himself. While checking a defibrillator used to shock human hearts into action, Jay receives a jolt that starts a sinister, dangerous and ultimately fatal series of events.

While Jay is recovering and being cared for tenderly by ER nurse, Debbie Farrell, Jay and his boss, Dan Harris, watch as the Biomedical Department is shocked by a series of mysterious and potentially lethal equipment malfunctions. As Jay's romance with the delectable Debbie grows, he and Dan begin to suspect deliberate sabotage. But why would anyone booby-trap machines designed to save lives?

Jay himself becomes a suspect and then watches in horror as a fellow Technician dies in an accident caused by a faulty machine. When the breakdowns are used as an excuse to close down the entire department, Jay decides he must track down the killer before more innocent people are sacrificed. He suspects everyone, including his best friend, before uncovering the ruthless killer. Finally he recruits the entire department in a bizarre, fitting and very satisfying plot of revenge.

John Alvah Barnes, Jr. spent over seven years in Biomedical Electronics, working in over twenty hospitals in the Philadelphia area. 'I hadn't worked in the hospital environment for long before I began to think about the possibilities of writing a mystery grounded in a field that I found fascinating. The humor and physical comedy that I included in the story were natural for the atmosphere and I believe it gives my work a fresh and slightly offbeat feel. I hope my readers have as much fun with the story as I did.'