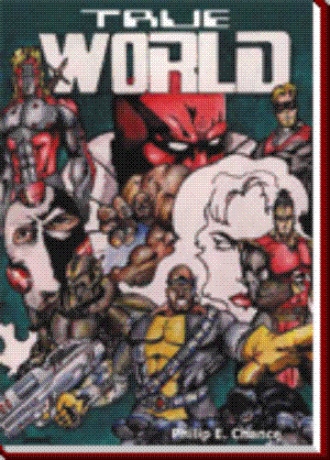 'I suggest you cut down on the saturated fat,' said the voice again. 'My sensors show that your cholesterol level is....'

'Kill the chatter Arkwell,' replied Steven, mentally. 'I am well aware of my cholesterol level. Besides...I’m sure the Lord will forgive me if I have an egg here and there. What’s your status and position?'

'I’m directly across the street,' replied Arkwell. 'I’m hovering approximately 15 feet above the side walk and I am fully cloaked. I have also recharged as instructed. Power readings are currently at 75%'

'Yea,' replied Steven. 'What did you have for breakfast?'

'If you must know, I ventured into the alley behind the coffee shop that you are now eating in and consumed its garbage dumpster. These people seemed as if they never used it anyway...there was garbage all over the place.'

Steven smiled as the waitress brought him his food. 'While your floating their doing nothing...' replied Steven '...Run a scan on all the major news networks in this area. Let’s see if there’s anything interesting out there today.'

'As you wish,' replied Arkwell.

Steven reached down and opened his newspaper.

'Are you from Columbus?' Asked the waitress, as she placed the plate on the table.

'No, I’m not,' replied Steven, as a particular article caught his eye. 'I’m originally from California. I’m just passing through Ohio on my way to New York.' Steven opened his paper so the waitress could see. 'I’m going to see this.'

The waitress looked at the headline.

'The heart of Christ?'

'Yes. It is said to be the actual fossilized heart of Jesus. It was discovered two weeks ago in Jerusalem.'

'And you believe this to be the actual heart of Jesus Christ?' Replied the waitress, with a puzzled look on her face.

'That’s what I intend to find out. The bible says that on the third day, Jesus rose from his grave. Do you believe in the bible?'

'I guess?' Replied the waitress.

'If you read it closely,' continued Steven. 'You will find that God has on several occasions raised his followers from the dead. In John 21: 11-18 Mary Magdalene saw two angels and the risen body of Christ, soon after she left his empty tomb.'

'You seem to know a lot about the bible,' replied the waitress.

'Steven,' interrupted Arkwell. 'I have found something on the channel 6 news that you may find interesting.'

Steven turned his head towards the other side of the coffee shop. The television set was off.

Instantly, the screen came to life. The waitress spun around.

'Now how did that happen?' She said, as she stared at the TV screen in disbelief. 'The TVs been out for a week.'

'Shhh!' Replied Steven, as he took another sip of his orange juice. 'I want to hear this.'

'This is Allison Quivers,' said the female reporter on the TV screen. '...Reporting to you live from mid-town Manhattan where a miracle has just taken place. Three people, a woman and her two children were trapped inside of the burning building that you now see behind me. Fire fighters fought desperately to get to them. The situation was hopeless. But just when you thought the end was near, a savior came from the sky.'

Steven’s body began to stiffen as the scene on the television set changed.

'We have footage of this savior,' continued the reporter. 'He calls himself...Messiah!'

Somewhere inside of the coffee shop a glass dropped and shattered on the floor as patrons stared at the television screen in disbelief. A man in a red and white suit was actually flying through the air towards the burning building.

'Arkwell,' said Steven through the mental interface. 'Is this some sort of special effect were seeing?'

'No, it is not,' replied Arkwell. 'My sensors do not detect any form of visual enhancement.'

'Then he is actually flying.' Replied Steven, out loud.

'No way,' said the waitress, as she turned to look at Steven.

'People can’t just fly through the air like some sorta superhero.'

'You would be surprised at what some people could do,' Replied Steven.

On the television set the screen changed to a view of Messiah grabbing the women and her two children from a burning window and landing with them safely on the ground. People began to swarm around Messiah as he floated above their heads.

'Who are you?' One voice shouted from the crowd.

'Where do you come from?' Shouted another.

Messiah stared down into the crowd as he folded his powerful arms across his broad chest.

'I am god,' he simply replied.

In the crowd, Allison Quivers could be seen pushing her way to the front with her news team.

'Did we hear you correctly?' She said, as she raised her microphone. 'Are you claiming to be god?'

'I am indeed a god,' replied Messiah, as he looked down at the reporter. 'Father of civilization and god of the universe.'

You are about to embark on a journey. A journey through the mind of one whose thoughts have finally been put to text. For years I have been a fan of various comic book titles and I found myself fascinated by the ideas and concepts of others. Beings with the ability to fly through the air and bend steel with their bare hands. Others who had been exposed to radiation and found their lives forever changed. These are the things that excited me. I can remember myself staying up late at night and reading about my favorite superhero as he once again saved the world from a diabolical villain. That was the norm.

As time passed I continued to read these story lines and the outcome always turned out the same. The hero won and the world was once again safe, but I found myself becoming bored. A change was needed. In recent years the comic book industry has tried to revamp their heroes. Some have gone through personality changes, while others have been killed off only to return again to continue their war against crime and injustice. But I asked myself: How many times can you kill a person off? What the world needs is a change.

Now ask yourself: If a person in this day and age had super powers, would they really run around in spandex and try to save the world? I don’t think so. These are different times and we are a different people. Situations are different. Our whole way of life is different. That is why I’m here. To bring a new perspective to the term...hero.

In this world you will witness the exploits of the True Breed as they rage their war against humanity and others of their kind. You will also bear witness to the Holy Wars as Sabbath and Messiah ignite the flame that burns within one’s religious beliefs. You will marvel at the adventures of The Gifted One as he battles against forces that threaten our world. Then finally, you witness the gathering of ReKon 3, America’s greatest fighting team.

These are the things that I bring to you. Heroes that represent what we once were and all of what we are soon to be. Welcome to the world of...true visions.

Philip E. Chance, age 32, is currently a food service supervisor who is married with a 12 year old son. As hobbies he enjoys computers, the Internet, comic books, video games, basketball, boxing, Star Trek and, of course, writing. Mr. Chance has aspirations to have his characters recognized world wide, and to be involved with a creative concept that will revolutionize the sci-fi industry.