And The Con Goes On 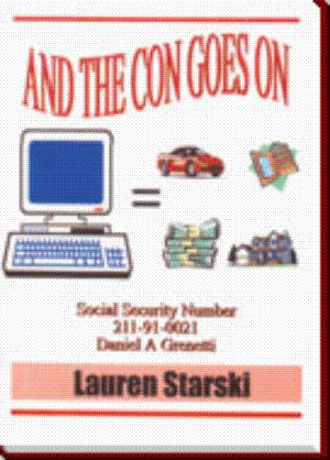 No one believed this could happen. A two million one hundred thousand dollar ($2,100,000) counterclaim filed against us by our tenants in answer to our simple eviction for possession of our property. The mailman delivered the envelope from our attorney containing our copy of this suit around 2:20 p.m., the 16th day of September, 1987. As I pulled the copy from the envelope, I now had to accept this reality. An answer and counterclaim were filed on September 11, 1987, in the State of Indiana, in the Lake Circuit Court sitting in Crown Point, in case #C87-3785.

As landlords we were being sued for taking pictures of our rental property during an inspection, while requesting to review or receive some acknowledgment from our tenants that they had renter's insurance. Because we allegedly discussed the upkeep of our property, during our two year absence from the state, with the couple managing it, we were accused of harassing our tenants. We were also being sued because I allegedly reported to the government our tenant's federal and state violations (while in possession of our property), involving computer fraud and abuse, credit application fraud and credit card fraud. It was also alleged that because I questioned the actions taken against us by our tenants' attorney with the Disciplinary Commission of the Bar Association, our tenants suffered severe traumatic humiliation.

Was this counterclaim a threat, a frivolous lawsuit; did it mean that we were in for the fight of our lives or was this mess now coming to an end? In recalling the events of the previous 60+ months and how we were victimized by this tangled web of fraud, deceit and misrepresentation, I could only wonder if I would take the same course of action once again. Or, should I simply remain a silent victim and ignore this most sophisticated con, as it continued to claim more victims across the nation.

The events leading up to this counterclaim started with a slowdown in the economy and unsteady employment due to the exhausted construction market. Extremely high interest rates also resulted during the recession of the early 80's. The possibility of relocating our family to another area of the United States looked promising. After further research and thought, Alaska seemed to be untouched by the recession. This state with its abundance of opportunity did possess some promise of a future. However, the basis for a decision in making such a drastic move was also impossible to comprehend.

Being married to a carpenter for over 20 years and having formed a corporation together we built speculation homes, built and sold custom homes, including our personal homes. I learned how to pack and move fast and make do under the circumstances. But on this occasion, our personal residence was still on the for sale market and we were unable to sell because of the extremely high interest rates. The speculation house that was started, was halted after the deck was completed and we were required to board it up. Our construction loan was, therefore, temporarily in limbo because of the continuing increasing interest rates. The only way to try and survive this situation was to look beyond to a new location with work potential. If this adventure proved out, we would hopefully rent our home worth well over $165,000, until it sold while holding on to the speculation house. This way we thought the situation and the economy would resolve itself, when business picked up in our home state.

In the middle of August 1984, my husband Mike, decided to personally check out Alaska for himself in a search for job security, while I stayed behind in Indiana with our two daughters, Gina and Rae. The three of us would maintain our house and wait for a possible sale. Or if we could secure a renter, we would still have time to get our affairs in order, just in case we were able to join Mike. Needless to say, with Mike's truck, the 'blue bomb', a trusty vehicle of 10 years, we feared it would not make the 3,468 mile trip. The money we were able to put together for such a gamble would then be forever lost, if he failed. With faith in God, the love of his family, the best wishes from friends, a favorite stuffed animal named 'Lucky' of Rae's, and a truck full of tools and assorted clothes, Mike left not knowing when we would be together as a family again.

During Mike's ten day journey, my thoughts on this decision wavered back and forth from positive to negative. This was the first and only time our family had ever been apart and the worth of such an effort was much in doubt. However, Mike arrived safely in Alaska on the 28th of August, after only developing a leak in his radiator from the rocks of the mighty Alcan. He was immediately able to find construction work and felt that he had found the promise of a future.

It was shortly thereafter that, unexpectedly, one of my real estate listings sold and closed out the beginning of October. With the proceeds, I was able to surprise Mike and fly to Alaska for our anniversary. While there, I was able to check Anchorage and the surrounding areas and found a lot of opportunity and promise for our whole family. The state was still in the booming stage. Therefore, a decision was now possible if the major hindrance of the house in Indiana could be resolved by renting it out until it sold. Unfortunately there had been no activity regarding a possible sale. Nevertheless, we could take one step at a time, while relocating to Alaska, and in the meantime try to financially survive.

Upon my return to Indiana, I had to discuss the options and their preferences with Gina, our sophomore in high school, and Rae, the seventh grader. Most important decisions were always made together as a family. The picture of Alaska and of their happy dad, along with the excitement of such a move across the country, raised our hopes high. Gina was reluctant and needed assurance, but her major concern was her family.

I compared our house to the rental market statistics and what our six year old, 11 room, four bedroom, two story, Mediterranean style house, with garage, pool and extra amenities, could warrant these days, due to the recession versus the monthly mortgage, taxes and insurance payments. I was then able to put a very fair rental package together. I was not, however, able to include any profit margin in this figure, as our major concern was to have the house self sustaining, while making sure it would be rented out to bonafide individuals.

The rental inquiry activity at the time was not great, but it was better than the for sale activity. The idea was to keep the house on the market while leasing it out until it sold, but guaranteeing a one year lease. I felt safe in this situation because it would keep us from making any hasty decisions in Alaska, in the meantime.

November 5th, 1984, a prospective applicant by the name of Dan Grenetti called in response to my rental ad in the paper. Dan asked questions not uncommon to a realtor, such as, type, features, schools, location, price, reason for the rental, and the length of the lease. He stated that his house was in Illinois and was like ours, not selling due to the high interest rates. His house was listed through a realtor and he now wanted to move back to his home state and rent something out, until he could purchase a house in Indiana after the sale. I explained briefly the reason for the one year lease while the house would remain for sale without a 'for sale' sign. He agreed it would work out if he rented our house, since he had a similar arrangement with his tenants. A comment was made regarding the asking price or value of our house, and he indicated it was in line with what he was intending to buy, hopefully soon.

Dan further asked what type of application, security deposit and references were needed, as he was very interested in viewing the house as soon as possible. He asked p

Dan Grenetti could toy with your credit history and Social Security Number without your knowledge. As a scam artist working the furnace and air conditioning business, he acquired numerous political and governmental allies in Indiana, while living in Illinois. With authorized access to a credit reporting computer terminal, he also moonlighted as a pirate, using the stolen, and now fraudulent, information for personal gain.

Such white-collar crimes are small-scale incidents of non-violent means, important only to the victims who suffer humiliation, despair, anger and financial ruin. As a victim, would you remain silent and not challenge the distorted credit histories, or get involved and report these nationwide law violations as Lauren did? Would you be prepared for the consequences?

Using the basic tools of the trade, the law, mind games and his bag of tricks, Dan controlled the situation and his victims over the years. Due to the indifference of the credit reporting companies, creditors and government agencies, Dan was actually allowed to continue his caper for a few more years without interference. He was considered a 'small potato' and his actions did not warrant an immediate or thorough investigation, even though more victims came forward.

Finally, Dan was partially restrained and pleaded guilty to two counts of mail fraud. This plea enabled Dan to avoid prosecution for the other crimes, including computer fraud and abuse. By the wayside, Dan left several victims financially burdened as he walked away from a $2,100,000 lawsuit he initiated against Lauren and her husband. The entire incident was conspicuously swept under the rug and did not set precedent. Therefore, the credit reporting companies can continue to allow exposure of their credit history files to such perpetrators without hesitation and remain unaccountable for such intrusions of privacy.

Lauren Starski currently resides in northwest Indiana with her husband and two daughters. For over 25 years, her employment encompassed various sectors of business. Through consumer awareness presentations, she presently addresses various safety issues.