Evil To The Marrow 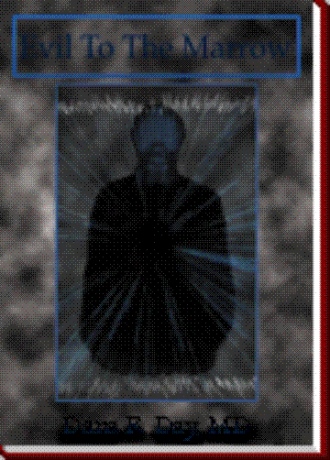 Her heart pounded in her chest. She was no longer alone, but she knew she had to be. She hadn't let anyone in, and she hadn't heard anyone trying to break in. There simply couldn't be anyone else in the shop. It took a moment to convince herself, but she turned back to her computer, closed the software, and turned off the power supply.

As she reached up to turn off the desk lamp, a movement near the door startled her. Movement. No sound. Shaking her head at her own silly fear, she got up from the desk, picked up the deposit bag, turned off the light, and stepped out of the office.

A sudden pressure clutched at her throat. In an instant the pressure was so severe the cartilage in her trachea began to snap. She touched her throat ... a massive hand firmly gripped her throat. She saw a shadow. Her feet left the floor as she vainly struggled to kick out at this shadow, this void that had her. A low, rumbling sound like a waterfall penetrated her ears. As the sound intensified, Marcia felt the last glimmer of life begin to drift away. Her last touch with life was the sound of a waterfall.

With all the struggle now gone from her body, the massive hand, and the body that controlled it, gently placed her on the prep table in the kitchen. This blackhole enjoyed sucking in all the light and goodness it could find. A feeling of great excitement rose in his throat, warmth began to swell in his groin, and the ultimate ecstasy of totally controlling a woman effused him with a joy he had never known with any other relationship.

Turning from his masterpiece, he reached for a phone. His fingers carefully picked out the numbers. The phone rang only twice.

'San Francisco police department. How can I help you?'

The phone rang only once.

'This is Nuyen. What do you want?'

'A masterpiece has just been completed at 1725 State Street. This is my best one yet. I hope you can come and see it soon.' A low rumbling sound filled the phone, then a click.

A patient whose bone marrow has stopped working confronts Dr. Ray Dehey. He refers the patient to cancer specialists who enroll the patient in a new research protocol designed to help develop a universal donor bone marrow that would allow every person needing a bone marrow transplant to obtain one without the worry of finding a suitable donor. The outcome for his patient is outstanding until -- Then Dr. Dehey learns first hand the meaning of the word EVIL.

Dana R. Day, MD is an Emergency Medicine physician, actively working the ER fulltime. During a change from Family Practice to fulltime ER work he found himself with more time than he had ever enjoyed. He finally embarked on his long held dream of writing medical suspense thrillers. EVIL TO THE MARROW and ENDORPHINS are the results of many years of first hand experience in medicine, and a life long passion for science fiction and mysteries. Hopefully your own passion for reading will be fed by his works.

Dana is 49 years old, happily married to Lori, the proud father of 5 daughters and the very proud grandfather of 5. He resides in rural Missouri, far from the location of his novels and far enough to be warm and not shovel snow during the winter. His years in Family Practice in rural Minnesota convinced both him and Lori of the need to move to warmer country.

Along with his work in the ER, he and Lori raise ostrich. They are currently boarding and incubating for four other breeders besides their own. They have just brought their first meat products to the retail market, and are working hard to make ostrich the 'Healthy Red Meat of the New Millennium.'

Please enjoy feeding your passion for suspense thrillers with EVIL TO THE MARROW and ENDORPHINS.