by Thomas A. Rohrer 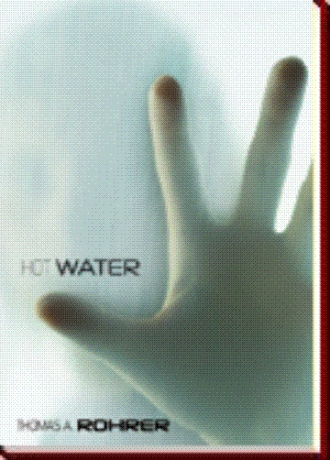 Attorney-at-law Dennis Duckett, DD to his friends, sat across a small, scarred table from Ollie in a tiny visiting room at the jail. About Ollie's age, thirty-four, he was well dressed in a business suit and what appeared to be Gucci loafers. A self-assured, good-looking guy. Ollie felt self-conscious in his orange jail coveralls.

'That's what the police file says. She did not drown; she was strangled.'

'The police file also says you were drunk. The blood sample the doctor took from you shows you were well over the limit.'

'I wasn't driving. I took the bus. I always take the bus.'

'Do you always stop at a bar for some drinks before you go home?'

'No! I never do--- well, almost never. This was unusual--- very unusual. You see, the project we were working on was cancelled, and--- '

'I know; I've read your statement. When you called 911, you told them it was your fault. Did you kill her?'

'I can answer the last question. They are going to charge you with murder.'

'Why not? He asked if I wanted to tell him what happened, and I told him.'

'It was a voluntary statement on your part?'

'Sure. I told him, but he didn't believe it. He finally asked why I had killed her. That's when I decided I needed a lawyer. Why wouldn't he believe me?'

'Statistics are on their side. Over 80% of the homicides committed at home are done by a close family member--- a spouse, a relative--- possibly a lover. Mr. Anderson, did your wife have a lover?'

'How long had you been married?'

'No arguments of any kind?'

'No. Well, nothing serious. We had some--- disagreements from time to time. All married people do, don't they?'

'Your wife had a number of bruises. There was a broken chair in the kitchen. Did you have a fight with her?'

'Mr. Anderson, do you have any idea who might have killed your wife?'

'No. I don't know why anyone would want to harm her, much less kill her. I can't think of any--- we stayed pretty much to ourselves. Maybe, at her work--- I don't know.'

Duckett looked steadily at Ollie for a minute or two. He didn't seem pleased with what he saw. 'Mr. Anderson, I have agreed to take this case only because a friend, your company's patent attorney, asked me to do so. I must warn you, we specialize in criminal law, not--- creative defense. If you have any--- doubt--- about your innocence, you would be better off with another firm.'

Duckett sighed. 'All right, I'll see what I can do. Let's start with the people who were with you at the bar.'

When Ollie was taken back to his cell, he was trembling. He had expected his lawyer to get him out. The lawyer said that would have to wait until he was arraigned in court--- maybe two or three days.

One of his cellmates, a tall, cadaverous black man, said, 'Cheer up, dude. It ain't the end of the world. You got a lawyer ain't you?'

'They say I murdered my wife. I didn't!'

The black man laughed. His other cellmate, a little weasel of a man with a scruffy beard, said, 'Hey, that's something new, eh Mose?'

'Don't pick on him, Knuckles. He ain't been in before--- he's plumb scared.' The black man, Mose, turned to Ollie. 'See, dude, nobody's done nothin' in here. You better stick to that story, too, 'cause these cells have ears, right, Knuckles?'

Ollie said, 'You both have been in jail before?'

'Did you have to go to prison?'

'Not me,' Mose replied, with a note of pride. 'I got probation. See, my woman was takin' the money I give her and was doin' drugs. I kinda slapped her around a little to knock some sense into her, and she goes and calls the cops! My lawyer got me off.'

'What happened this time?'

Mose shuffled his feet. 'Wasn't my fault. I was chasin' her, tryin' to get my money back, and--- and she falls down the steps of our 'partment house. Busted her up some. It was an accident--- I never touched the woman.'

That night, lying on his narrow cot, Ollie stared at the ceiling. Lisa had been strangled. Somebody had killed her. Why? Who? Well, he hadn't done it, whether the police thought so or not. How much did the police know about him? He hadn't been entirely truthful with the lawyer. His marriage had been difficult. He and Lisa had had a number of arguments, mostly about her career in advertising. About her lifestyle, really, not her career. Her schedule was always so uncertain, so--- undependable. It was necessary, she said. She had to entertain clients, to cultivate contacts, to do what she called 'networking'.

Lisa. Tall, slender, long dark hair, beautiful brown eyes. She talked with her eyes; she didn't need to use words. Beautiful. He couldn't believe his luck when she came on to him--- it had never happened before. They say opposites attract--- from the moment he met her, he had wanted her as his own. She never had been--- he knew that. He had been allowed to share her, but she had never belonged to him. Lisa belonged only to herself, and now she was gone.

Two days later, Ollie's lawyer came back to see him. Ollie was taken to the little interview room again.

'We're scheduled to appear in court this afternoon,' Duckett explained. 'When the judge asks you how you plead, you say 'Not Guilty'.'

'Will they let me out of here then?' Ollie asked.

Duckett frowned. 'I doubt it. I'll request that you be released on bail, but if the DA opposes it, as I think he will, it may be denied.'

'You're being charged with first degree murder.' 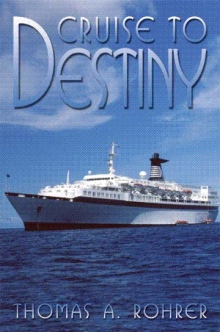 Cruise to Destiny
Thomas A. Rohrer
£9.49

A person is searching for a new identity in a suspicious world. You think that's easy? Not here , not today.

Ollie Anderson, a mid-level electronics engineer in Silicon Valley, is falsely accused of killing his wife. Facing sixteen years in prison for a crime he did not commit, Ollie flees and attempts to establish a new life. In an odyssey through Salt Lake City, Boise, Jackson Hole, Aspen and Montrose, Ollie finds friendly people , even love, but has great difficulty in escaping the invisible identification tag we all acquire when young. In the end, a sort of crooked justice is achieved.

The author, a licensed marine engineer, started writing toward the end of his professional career, putting into words the situations he had experienced in a lifetime of travel around the world. Life, he observed, was indeed stranger than fiction, but real situations often develop too slowly to hold most people's interest. On the other hand, fiction, good fiction , is about 90% true, but reassembled by the author to form a very readable tale that could have turned out that way in real life.

With over two million miles in the air, the author has read his share of books, mostly paperbacks bought at the airport. A good book, he believes, should move along steadily, the story line should always be visible, and the ending should be satisfying. Above all, the tale should be believable , something that could happen to the reader,maybe today!

Mr. Rohrer lives with his wife of over fifty years in northern California, in the middle of Silicon Valley and is an enthusiastic supporter of e-books.