The Last Riders on Route 66 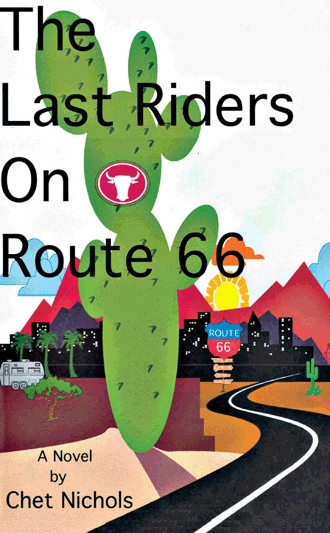 Pete and I decided it was time for one of us to sleep. He tumbled down through a ditch, over a barbed wire fence, and laid down in a field alongside the road.

He wound up sleeping in the middle of a herd of cattle that had bedded down for the evening. It must have been acceptable to the herd because I didn't hear any complaints. I knew that cows would sleep with people, but Pete loved hamburger. I couldn't figure out who was in deeper trouble. Fortunately, there was no stampede.

I stood along side of Route 66 trying to hitch a ride for us. We were headed to Los Angeles for Spring Vacation. We had decided to take this trip because we heard that the government was going to re-name Route 66 and make it a designated interstate highway, so we agreed to go for some high adventures before they were all smoothed over. There were lots of cars, but they sped by. Some were friendly enough to honk, but not friendly enough to stop and give us a lift. We had left Oklahoma City at about ten o'clock in the morning and we had received three short rides. We kept hoping for that Mother Lode ride, one that would take us all the way to Los Angeles.

It was dark and past midnight. The stars were out and half of a moon peered over the horizon. I was tired and hungry. Worst of all, I had discovered that we had been hitchhiking in front of the Oklahoma State Penitentiary For Men, just west of El Reno. Our last ride lived in El Reno and he was nice enough to take us to the far side of town where he did a U-turn and headed back into town. Then, a peculiar thing started to happen. Cars came out to the edge of town, stopped, flashed their brights on us, and proceed to make a U-turn back into town. Either this was a local pastime or people were curious to see the-two-jokers-hitching-a-ride-in-front-of-the-jail. We were highway curios.

I heard some of the cows start to stir. One went into a long hooting spell. Suddenly, I heard Pete swearing and running.

'Pete, what are you doing out there?' I yelled, again.

'Shit, I'm being chased by bull or something!' he screamed.

Somehow he cleared the barbed wire fence in the dark - - a testament to his athletic ability.

'That,' I said as I pointed across the road to the huge, dark compound.

'Only the Oklahoma State Penitentiary For Men,' I replied.

'Yes,' I stressed. 'I went across the highway and saw the sign.'

So, we started walking. Los Angeles seemed to be slipping away in a reverse vertigo. Every step forward seemed like two steps back. It would be a long walk. That was not the first or the last time I had that feeling.

Chet has been writing for over 34 years. Recently, he has completed a book of poetry entitled, Talking and Gibbering. He also co-wrote a book entitled The Bath Builders Book, a 'how-to-do' book about construction techniques used in building saunas, hot tubs, and steam baths.

Chet is also an active professional songwriter and multi-talented musician. He has written about 500 songs, 150 of which have been published. He has produced two record albums released in the early 'seventies by Kama Sutra Records and he has worked as a professional entertainer for 8 years. He toured with Jethro Tull, The Jefferson Airplane, Poco, The Nitty Gritty Dirt Band, Steve Martin, Dan Hicks And The Hot Licks, George Carlin, Brewer & Shipley, and many others, as an opening act. Presently, he is preparing to debut a CD of new original songs, which will be available soon on Media Records.

In addition, Chet is an actor who has appeared on stage, screen, and television. He has appeared on TV in Home Improvement, Early Edition, Unsolved Mysteries, and Comedy Central. On the big screen, he has appeared in Baretta, Good Burger, and the soon-to-be-released Mel Gibson movie, Payback.

For the past several years, Chet has also worked as a Producer/Agent for commercial production companies. As a Producer, Chet has won two Clios.