Santa and the Magical Unicorn 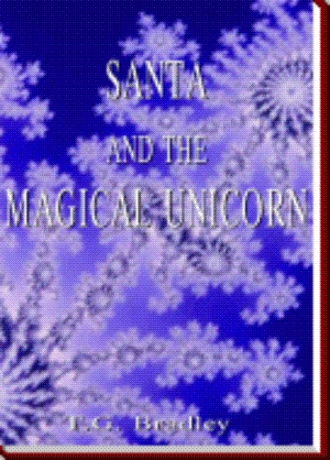 They had no more than cleared the passageway when Joshina hit something, causing Gina to fall off the unicorn's back and onto a soft white ground. Picking herself up slowly Gina saw neither she nor Joshina were hurt. She looked all around, looking for the object they hit but couldn't find anything. It was then that she noticed that the ground in this world was not like the ground in her world. She had never seen anything like this in poke. It was white and powdery, not dark and firm, and it glistened in the sunlight. She tried picking up a piece of it, only to find it slipped through her fingers like fine white powder. Shaking from the cold, she walked over to Joshina and said, 'Joshina, this is a very strange place! The ground is as white as your are and it sparkles in the sun. And it is also very, very cold!'

Joshina pawed the ground and shook her head in agreement. She too was starting to shiver.

Gina told her, ' I guess we should use some magic to protect ourselves from this cold so we will not freeze to death! But this time I would like to use a little of my magic, because we have used only your unicorn magic up to now.'

She placed her hands together and began rubbing them together gently, causing them to turn a bright glowing red. She pulled them apart, placed one hand over Joshina's head and the other over her own head. The red heat gently fell from her hands and covered them completely with its magical heat, forming a barrier from the cold. Their forms glowed red for a couple of seconds. Then the red vanished, yet they both remained warm.

Gina lowered her hands and smiling said, 'Well that should do it! The magical heat screen I placed around us will protect us from the cold until we are ready to return to poke.'

She started looking around again at the white countryside and asked Joshina,

'What in the world did we bump into? I can't see a thing that might have been in our way!'

Suddenly she got her answer. She heard a muffled voice yelling frantically.

Gina turned around and around trying to locate where the voice was coming from, but she still could not see anyone. Joshina tapped her gently on the shoulder with her horn and pointed her horn in a direction. Gina looked in the direction Joshina was pointing. She couldn't believe her eyes. Someone was buried head first up to the waist in the white powder and whoever this person is was kicking frantically trying to break free. She suddenly became amused by the sight and laughing said to Joshina, ' I think we may be the reason this poor person has this problem! Would you please help it out of its difficulty?'

Joshina walked over the person, gently hooked the seat of its pants with her horn, and carefully backed up, freeing the person from the white powder. As soon as the person was free, Gina could see that it was a young boy with pointed ears about her age. The boy stood up, turned around and found himself standing face to face with Joshina. He jumped back a step in surprise, closed his eyes, rubbed them, then opened them staring at Joshina and said,

'Hey, this isn't funny, Davy ole boy! Seeing unicorns is a little too much for this elf!' He closed and opened his eyes once more to find Joshina still standing in front of him, staring at him with her big dark eyes. 'Well, it's been nice meeting you Mr. Unicorn, but I hear Mr. C. calling me', and he turned to run away.

'Wait a minute', Gina yelled, 'please don't run away. Joshina will not harm you!'

He stopped, turned and glanced at Gina. He saw a beautiful fair-haired girl, wearing nothing to protect her from the cold but a light silk gown and a pair of sandals. Curious, he asked, 'Are you a bad dream? What are you two doing here? You are not an elf' and pointing to Joshina, 'This is definitely not a reindeer!'

Gina smiled and walked up to the elf and said, 'We are not a bad dream!', putting her arm around Joshina's neck, Gina continued, 'This is Joshina. She is a winged unicorn and I am a magical princess from the land of Poke. In fact, Joshina has magical powers too, as do all unicorns.'

The elf didn't really know if he could believe what he was hearing, but he decided to humor the strange pair by saying, 'Sure, this is a real magical unicorn and you are a real fairy princess with magical powers, come from another world to conquer the North Pole, Right!'

Gina was beginning to get annoyed and went on to say, 'No, you have it all wrong! Joshina is a real magical unicorn all right, but I am not a fairy princess at all. I am only a regular princess with magical powers who came from another world to protect this world from an evil sorceress, Wanda. She is the one who seeks to conquer your world by harming your king, Santa Claus. Now can you get that right?'

At this point the poor elf couldn't get this or anything else right. He decided to make the best of it by saying.

'Wait a minute, lady. Let's try starting all over and see if we can make any sense of this. First, my name is Davy and I am an elf. Second, could you please explain what you are doing here?'

Gina nodded and calmly said, 'Sure, Davy! My name is Gina and the unicorn is my companion Joshina. If you give me a few minutes of your time, I will tell you everything you want to know.'

Santa and the Magical Unicorn, A Christmas Fantasy, is a blend of a medieval tale and a Christmas fantasy. Our story first takes you to another world and the medieval kingdom of Poke. Poke is a land that has Kings, Queens, Wizards, evil Sorceresses, a magical Princess, and a magical Unicorn. Magic is strong in this world. The kingdom of Poke is recovering from a hard fought magical war between Edmond, the Kings court wizard and the powerful evil sorceress Wanda. Edmond was victorious over the Sorceress, but she managed to flee from her world into ours before facing her demise.

Wanda soon discovered her magical powers had doubled and that magic doesn't exist in this strange new world. She then plans on conquering this world through her evil magic. But first she must seek out and destroy the one person that brings peace, joy, and goodwill to this world, and his name is Santa Claus.

Edmond in Poke soon discovers Wanda's evil plans. He arranged to have a magical princess Gina and her faithful magical unicorn companion Joshina to journey to our world. Gina's mission has a two fold purpose. First, to confront and vanquish the evil Sorceress. Second, to discover the meaning of Christmas and return to Poke with it.

Princess Gina meets and teams up with a Christmas Elf named Davy . The Unicorn, Joshina teams up with Santa Claus. They all soon find adventure, danger, excitement, and even romance while encountering the powerful evil Sorceress.

My name is T.G. Bradley, I was born in St. Louis, Mo. in 1952, but now live in Tucson, AZ. As a child, my family moved around a lot. We lived in Missouri, Kansas, Texas, and Washington, to name a few states we live in. As an adult I moved around a lot working on Oil Pipelines in Texas, North Dakota, Indiana, and Alaska.

I am now married to my wife Arlene and we have a wonderful son name Joshua and have settled down in Tucson with my mother Edith and about 7 dogs.

I like the simple things in life. I like old movies; reading a good book. I like almost all forms of music but my favorite is classical, with the golden oldies running a close second.

I cherish quiet moments when I can get the chance.