Murder on the Wheel of Fortune 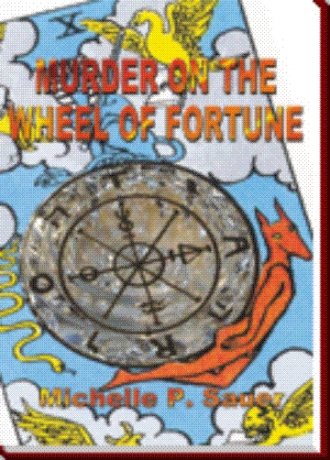 'Hi J.D.' I said as I walked through the curtains. He looked up and waved.

'Georgie is with a customer right now. How about a coke?' He's also a cola addict. I nodded and he headed to get them from the cooler.

'A customer so early?' I asked.

'Yeah, you can tell summer's coming. Business is starting earlier and doing better.' Before I finished my drink, my first customer came in. Another teenager wanting to know if she would marry her current boyfriend. I disappointed her when I told her she would not marry for awhile yet. But she would eventually and have children. That cheered her up. Most of the rest of my customers wanted more of the same. Between customers, Georgie and I were able to visit a bit and even grabbed a slice of pizza next door. Pizza on the Boardwalk has a flavor that can't be surpassed. I don't know if it's the salt in the air or what, but I really enjoy pizza at the shore. We even managed a frozen custard. But as evening drew near and the crowd changed, we became busier.

I had a slight pause between customers and ran to the bathroom. When I returned, J.D. had shown a girl into my booth.

She looked to be in her early twenties and was attractive with light reddish brown hair and green eyes. She was picking at a sculpted fingernail and I sensed she was nervous.

'Hi' I said. 'What kind of reading do you want?' Dumb question. She giggled nervously. I just knew she wanted to know who and when she would marry.

I was surprised when she said 'Let's just say I got a new job and I want to know what you see for me. I'm hoping this will be something that can turn into a lot of money.'

I blinked to clear my mind from what I had thought and handed her the Tarot cards.

'Shuffle them until they feel right to you' I said and gave her instructions on how to cut the deck into three piles. 'Okay, now put the last pile on the first and all of it on the second.'

I expected her to leave the cards on the table and sit back, but she picked up the deck and handed them to me. As I reached for them I felt a tingle and then a shock as our fingers touched. All of a sudden the room faded and I saw her sitting across from me covered in blood. Her nose was obviously broken as were the bones in her left cheek and around her left eye. It looked as if someone tried to beat her unrecognizable. Her mouth was moving but I could hear nothing but a roaring noise in my ears. My heart was beating so hard and so fast I thought it would jump out of my chest. I closed my eyes and shook my head hard to clear it of the vision. I must have looked pretty shaken because she said 'Are you okay? You look a bit sick.'

Cil Duncan is still trying to find herself and the right job. She has a bit of psychic ability that seems as likely to help her or get in her way. Her mother is in denial over Cil s psychic ability and lifestyle and wants her to get married and have kids like her older sister Louise. But the only man in Cil s life right now is Caesar, her very demanding Siamese cat.

After her last job fiasco, her best friend Georgie talks her into becoming a Tarot Card reader on the New Jersey Boardwalk. That seems to work for her until she reads her way into a murder. Because she feels partly to blame, Cil feels obligated to get involved, and helps the police solve it more out of her talent for being in the wrong place at the wrong time than any deductive skills or psychic help. And she makes quite an impression on the new Chief of Police but can he handle Cil and a jealous cat?

Michelle Sauer has published a couple of articles in Venture Inward magazine and several short stories in the Corinthian, the anthology published by Enterprise State Junior College in support of local writers. She currently lives in Enterprise, Alabama, but grew up in Newark, New Jersey and has lived in Georgia, Alaska and Germany as both Air Force Veteran and Army wife. She has one daughter, an artist and student at LaGrange College in Georgia. Both mother and daughter are active members in the local Mensa Chapter