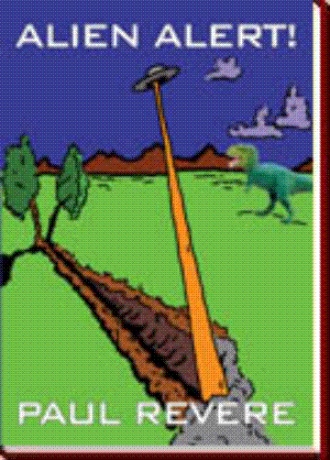 With Colonel Corso's book and its impact finally absorbed into my being, I was ready to take a long look again at the dinosaurs.

My earlier intuition had whispered to me that all the fascinating variety of dinosaurian warriors, with their constant and steady procession towards nightmare, could only be accounted for by one thing...deliberate genetic engineering by some outside force.

Now that the fact...not the hypothesis, but the FACT...of an extraterrestrial presence on earth was at last confirmed, I could look at things in a different light.

If extraterrestrials are here now, there seems to be no reason to exclude previous contacts, perhaps stretching all the way back to the times of the dinosaurs.

I began to expand my theory, began to roam more widely over the dark and mysterious landscape in the hope of casting upon its rocky and abandoned terrain more light...

I do not pretend to have all the answers, not even all the questions. Possibilities abound, and anyone can make up their own. But I would like to explore certain scenarios, ideas and tentative conclusions. None of it is set in stone, all of it is subject to revision and editing at any time... by me, by readers, by anyone.

First of all, the Colonel's revelations made it clear who the outside force doing the genetic engineering on the dinosaurs might have been.

Not God, which was a relief.

Extraterrestrials. Perhaps the same group presently observing us...which was NOT a relief.

The next logical question to be answered would have to be...what on earth for? What would be the purpose for such a literally monstrous undertaking?

Lots of answers come along just as logically, in a kind of parade.

The dinosaurs could have been Guinea pigs of a kind, laboratory animals being kept under strict observation. They hardly have the advantages of fruit flies, but on the other hand their very size and grossness show changes on a magna-scale, easy to observe and confirm without resort to microscopes.

If the aliens are real...and they are...what is their Master Plan and when will they carry it to completion?

What are we in the grand scheme of things? Are we naturally evolving creatures or were we created? Do we have a set destiny or do we create it ourselves?

Our secret past is now impinging inexorably upon our world.

The approaching crisis will bring it all out into the open.

How can we prepare ourselves for that crisis? What should we expect and what can we do?

Read the startling answers for yourselves in this iconoclastic book that shatters past illusions and paints a picture of the present that will raise your consciousness to new levels.

A timely warning can turn potential tragedy to great triumph.

This book is that warning...

Paul Revere is the pseudonym of a writer who normally specializes in Shakespeare research and science fiction novels.

The great crisis he foresees approaching makes him now assume the nom de plume of one of America's great Revolutionary War heroes...the man who put the colonists on the alert against the force that threatened to take away their lives, their fortunes and their sacred honor.

He hopes to play a similar vitally important role here, by the warning dramatically portrayed in the pages of this book.