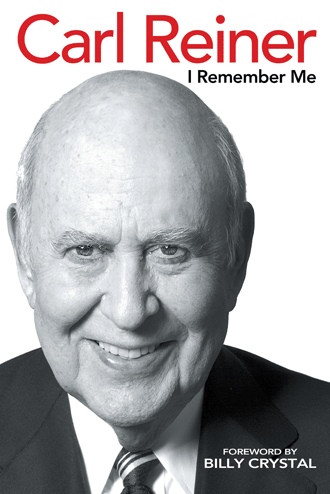 The first time I saw Carl Reiner was when I was six years old. He made me laugh. Our family loved Sid Caesar’s show, and my dad, who was a comedy maven, let my brothers and me stay up late on school nights to watch the master. Carl, along with Sid and Howard Morris, were doing a takeoff of those newfangled rock-and-roll singing teams. This group was called The Three Haircuts, and all they did was pose and adjust their cufflinks and sing a silly song. Carl stole the scene just by jumping up and down with a crazy smile on his face. Over and over he would jump, and every time he did, we would laugh and laugh.

As I grew up and started to study comedy—by not only watching television but listening to live comedy albums—I understood that as hilarious as Mel Brooks was as the Two Thousand-Year-Old Man, it was Carl who was feeding him, knowing when to jump in, and knowing when to let Mel go.

Later, as the creator of the great Dick Van Dyke Show, and also making an occasional appearance as Alan Brady, once again it was Carl’s genius and energy that I was attracted to. Yes, Dick and Mary Tyler Moore were tremendous, as well as Morey Amsterdam and Rose Marie, but it was Carl who gave them all heartbeats.

When I became a working comedian, I appeared on All in the Family, playing Rob’s best friend. The part suited us well, so Rob and I decided to keep it going. We had just moved from New York to L.A., and Rob really took us under his wing. We were invited to Rob’s thirtieth birthday celebration, which was to be a small dinner party at Carl’s house in Beverly Hills. I would get to meet him. I was so nervous, I called Penny Marshall, Rob’s wife at the time, and asked her what I should wear. She just laughed and said, "Whatever you want. They’re not like that."

We arrived at his lovely home and Carl wasn’t there yet. "He’s picking up the Chinese food," Estelle Reiner, Carl’s lovely wife, told us all. The door opened, and there he was, carrying a carton filled with those little white take-out boxes. Once he put those down, he introduced himself, and I couldn’t believe my good fortune at getting a chance to meet a real giant. A giant who gets his own Chinese food. I was thirty when I met him. He made me laugh.

He then announced he was giving Rob his birthday present. He went outside for a moment, and then on a leash, he brought a goat into the kitchen. The frightened, adorable goat started slipping and sliding all over the tiled floor. The more frightened the goat became, the more pellets flew out of his rear. It was like a hairy slot machine that hit a jackpot. Carl was laughing very hard, as were we all. My usual birthday gifts were handkerchiefs and a crisp five-dollar bill. It was a great, fun night, and Carl spent a lot of time talking to me about what he’d seen me do on television, and he was so supportive, charming, and funny. He didn’t have an ounce of pretense, and indeed he felt like the uncle you always wanted to have. I’ve known him for thirty-five years now, and he’s never changed.

The last few years, we’ve had many lunches together, along with a who’s who of comedy: Larry Gelbart, Neil Simon, and Norman Lear. The stories were fantastic, and it was Carl who would not only prompt everyone to tell a story that we hadn’t heard, but also he never stopped laughing with his beloved friends, filling in missing details if they were forgotten. Sometimes comedians are not generous with their laughter. They tend to sit and listen and nod, like the wise men in schul. Not Carl. He loves to make people laugh, of course, but I think more than that, he loves to laugh. When he called to ask me to write this foreword, I was so flattered. From those grainy, black-and-white images of the jumping man to becoming his friend has been a great joy and honestly, an honor.

This book is a great journey as well. It is the not just the story of a show business life; it is the story of a family. From Carl’s parents to becoming a parent himself, Carl takes us into moments of his memory as if we were standing there when they happened. The path that funny people take is often a slippery one, and Carl’s story is no different. He paints with beautiful colors and details all the fascinating family and friends that Carl touched and has been touched by. We also get an intimate portrait of his relationship with his beloved Estelle, from the first time they met until the moment she passes away. I knew them for a long time and spent many a wonderful evening with them both. Well into her eighties, Estelle was still singing in nightclubs, and Carl was her roadie. Making sure her microphone was right, her ukulele tuned, that we were all seated comfortably, doting on her every need, he never sat down. Once she started to sing, I found myself watching Carl watching Estelle, smiling that proud, loving smile that was on his face for over sixty-five years.

Carl Reiner is not just a funny man who has made us laugh in one form or another for a very long time. He has been comedy’s North Star. A constant. I’ve always looked at his career as one of the best ever and one of the most important. He is one of the great sketch comedians of all time; a fantastic master of ceremonies; a great comedy writer; and as a director, he has given us some of the best comedy films of all time. He is an author, of course, a playwright, and author of wonderful children’s books. He has done this for seventy years, never taking his foot off the gas pedal. He knows who he is. He didn’t have to be the star. Always willing to be second if it helped the team finish first, Carl has never had an air about him. He is what he is: a nice genius.

Years ago, I was a guest on the game show, The Ten Thousand-Dollar Pyramid, and I have to tell you I am the world record holder. Google it, you’ll see. In the preliminary round, I was giving the clues to my partner. Names of celebrities appeared on the screen that only I could see, and I had to describe this person in a creative way so my partner could guess who it was. In one minute, you had to guess ten names, and the pace was furious. Sammy Davis Jr. appeared, and I gave this clue: "World’s greatest entertainer," and my partner immediately said, "Carl Reiner."

The audience laughed, because they could see the clue, and after I said in haste as the clock ticked away, "One eye, black Jew," she got it. After I thought about it, she’s not that far off. I don’t know many people who are more entertaining than Carl Reiner. He is a brilliant man, still curious, still interested, and at ninety, probably still can jump up and down like a crazy man. I was sixty-four when I read this book. He made me laugh … and cry.

I Remember Me is the perfect Carl Reiner title. I mean, who could ever forget him?

I Remember Me weaves an American tapestry of colorful tales, beginning with the timid musings of a young boy on the verge of becoming a man in the Jewish section of New York’s Bronx neighborhood, and bringing us up to date with the mature insight of a man whose remarkable trajectory has sent him to the top of Hollywood’s elite and sparked the careers of dozens of household-name entertainers. Along the way, Reiner treats his loyal readers to everything from the ordinary to the truly unforgettable: a family trip to a nude beach, French lessons with Mel Brooks, a chapter dedicated to Rinnie the dog who unfortunately mistakes a skunk for a cat, a surprise early-morning visit from the McCarthy era FBI, a heart wrenching story of loss describing the day of his wife’s passing, and then in a revealing chapter of Reiner’s character, he describes “the most theatrically triumphant day” of his young career.

Written with the same combination of playful jest and modest humility that has garnered the love and respect of fans for generations, I Remember Me remembers the creative and inspiring journey of one of the most revered comedic icons of the past hundred years.

“Carl Reiner is at that wonderful point in life where he knows absolutely everything. Especially, how to tell a wonderful story. I just love being in his world and this book is the Grand Tour.”

“Great stories from the great Carl Reiner. I liked Chapter 29 the best.”

“At a time when so much of comedy can be cruel and mean spirited... Carl Reiner is a perfect example of comedy and kindness mixed with just the right amount of biting wit to make for a really satisfying read.”

“Crime and Punishment has always been my favorite book... Until Now!”

For over half a century, millions have appreciated Carl Reiner’s work as comedian, actor, director, TV writer and author. Winner of numerous accolades, including twelve Emmy wins and one Grammy award, Carl Reiner once again brandishes his literary talents to tell the story of his life in I Remember Me. Reiner reminisces on ninety years of love and laughter, highs and lows, mistakes and triumphs. Told with a warm heart and an occasional touch of nostalgia, Reiner draws from decades of family, friends and fun to illuminate his life and career as one of America’s most loved and memorable figures.