So What If Another Man Screws Your Wife?

A Pathway to Sexual Peace of Mind 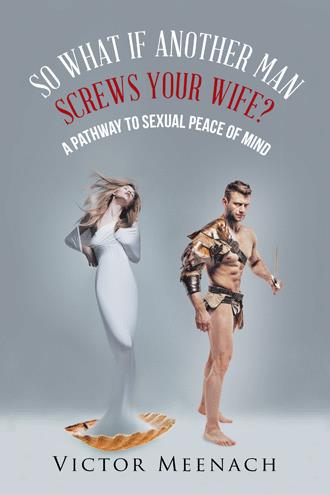 This book challenges the true love life partners to openly and uninhibitedly reveal their utmost inner animal sexual lusts and desires to each other. It also encourages soul mates to acknowledge the human emotions involved with male/female sexuality. It offers a daring alternative for the true loves to form a more perfect union of oneness, which will ultimately be a pathway to sexual peace of mind.

The book is written with humor, satire, sarcasm, and seriousness. It is left to the reader to determine which is which. It is a very easy read, written in stream-of-consciousness style, with one page per chapter.

Moreover, the book seeks to reduce-if not totally eliminate-jealousy, shame, guilt, abuse, domestic violence, and possibly divorce. It is intended to promote understanding of a "battle" that has been raging between the sexes for millennia. With no permanent solution yet to "this battle, this war between the sexes," this book proposes a controversial approach.

It is filled with logical thought-provoking questions and statements, but does not crusade any answers. Once again, it is up to the readers to form their own conclusions. Everything in the book might not be facts, but they could be!

The reader can easily find common threads of sexuality running through their mind and the minds of every adult human that ever lived.

This is one book that cannot be judged by its cover.

The author is well educated, well-traveled, and well experienced. He is a graduate Marshall University with a minor in philosophy. Since then, he has studied and researched many different philosophies, cultures, and religions. He was a teenager in the 60’s, the era of “sex, drugs, and rock n roll.” The sexual revolution was dramatic and explosive in those times and has progressed to the present. From a lifelong career in sales, including computers and real estate, as well as other products and services, he has met and communicated with thousands of people. He has socialized with the very rich and the very poor. He has served as a speaker and a writer, self-circulating his observations of life in his compositions of “Vic’s Friend,” in the 70’s and 80’s. In addition, his experience with other people he has met in the course of casual socialization has added many insights and perspectives. His associations with random other people include sports, poker, golf, classes, bar hopping, cocktail parties, even church. All of these activities and more allowed him to be privy to secret confessions, off hand remarks, candid viewpoints, and constant over and over references to sex. Through quite a few various dating services, he has had phone conversations and dialogue with five to six hundred different women across the USA. Those conversations provided more personal insights and perspectives. Some of those were explicit. Some were graphic. All were sexually enlightening. He is convinced, perhaps along with Sigmund Freud, that sex is the overwhelming driving force of the human mind. It is the major preoccupation of the vast majority of people, along with money. He is convinced that sex and money are the great motivators of civilization itself. Obviously, the author acknowledges his preoccupation and believes the same instincts reside in the minds all adult humans, whether they will admit it or not. As a graduate of Silva Mind Control, the author is a strong proponent of alpha thinking, imagination, and freedom of thought, action, and behavior. Through the years, he has attempted to encourage all people to use the awesome untapped powers of the individual human mind to create new realities for themselves. The author believes the possibilities for the individual are boundless and for a completely unified couple, even more boundless, possibly infinite.