by Daniel B. Silver 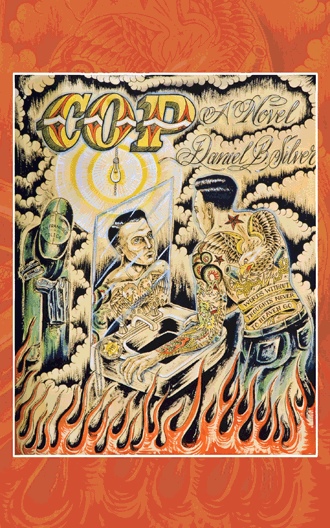 Chapter 1 When I pass by, all the people say, “Just another guy on the lost highway.” -Hank Williams, “Lost Highway” There are a few distinct and differing options available to a government employee who wears a star, a shield, or a badge on his or her chest when dealing with a drunken waste of space that has just let loose upon the officer’s skin a vile amalgamation of mucous, saliva and — in some extreme cases — blood. Today, this situation presents itself while the officer is seated in a marked patrol vehicle: a Crown Victoria with a black and white paint job delineated between the front and rear seats by a combination of clear plastic and wire mesh. By the way: for purposes of this demonstration, you are the officer in question. In many modern patrol vehicles, the wire mesh portion of the noted delineator is sparse enough to allow the aforementioned “loogie” to pass through it. Said loogie is often propelled by a warm burst of metabolizing alcohol-scented breath towards the back of one’s cropped head, down the back of one’s neck, past the wool uniform shirt’s collar, and into the humid microclimate that exists between the officer’s naked back, your naked back, the plain cotton undershirt, and the department issued ballistic vest. And I’ll pause briefly to note that when I first ran aground of this scenario, this officer’s back, my back, was recently, permanently marked with a traditional intra-dermal design involving a large eagle, two cannons, three nautical stars and a banner bearing the text: “Words without thoughts never to heaven go.” The tattoo hadn’t fully healed yet, which meant that the revolting matter running across it had a fighting chance of making its way into my bloodstream. This — as you may have already guessed — pissed me off. I really didn’t need anyone else’s ailments. I had enough of my own. Anyhow, your options are as follows: 1- Tell your partner — the similarly attired person seated next to you, who is fortunate enough to be driving the patrol vehicle and not the front passenger because that puts said partner in front of the plastic portion of said divider, which effectively protects him or her from what is currently being propelled at the back of your head — to accelerate. Pick up the vehicle’s onboard radio microphone, or just use the mic attached to your shoulder, to broadcast that the custody is currently spitting on you. Then, have your partner stop the vehicle, both of you get out, remove the prisoner, and place a spitter — a thin hood that looks like a really loose nylon stocking — over the lovely arrestee’s head. This tactic is reliant upon your department to actually stock and train you ad nauseam how to use spitters. Because a permeable, breathable nylon bag with a drawstring can somehow lead to in-custody deaths, which in turn lead to expensive lawsuits, which in turn really piss off the mayor — who is due to announce his candidacy for reelection in the coming days — of your major metropolitan city. But, for this scenario, you have a spitter and you use it. If you don’t have one, you stop your vehicle, get out, and let the prisoner hack to his heart’s content while your and your partner standby for a patrol wagon to respond. Once the wagon is on scene, you, your partner and the Wagon Master — I love that term — transfer the suspect to the rear holding area of the van. This area is not anywhere near the Wagon Master’s/driver’s seat. The custody can now spit all he or she wants and only make a mess for the next unlucky prisoner. You see, most major metropolitan police departments don’t employ janitors to clean those things; it’s reliant upon the Wagon Master, who is usually not the most motivated or brilliant member of the force. Sad but true. Anyway, problem solved. You go back to the station/the company/the precinct/the what-the-hell-ever, clean up and book the prisoner for being drunk in public and battering an officer… via loogie. You then prepare a strongly worded memorandum to the departmental administration questioning the thought process that led to half of the divider in your vehicle being permeable in the first place. Said memorandum is read, reviewed and stamped — provided it is of sufficient relevance to be sent to the next level up — by your sergeant, the lieutenant, the captain of your station, the Division Commander, the Deputy Chief of Patrol Operations and — so I’ve heard — the Chief of Police him or herself. Your memorandum is then classified as APPROVED or DENIED and sent back down the chain of command where, one day, you find it waiting for you in your mailbox with a bunch of stamps and initials all over it. Jack shit then changes.

Author and law enforcement officer Daniel Silver tells the story of a tattooed punk rocker turned rookie San Francisco policeman, Dougie Cohen. In his first year on the job, the stresses, horrors and frustrations Dougie encounters take their toll on his patience, health, sanity and love life. Dougie struggles with night terrors, addiction, disease and the loss of his former self to his new police persona. Dougie is on a collision course with the reality of urban law enforcement. He'll either break, or accept the fundamentals of what it means to be a real cop.

It’s not that I am - or have ever been - anywhere near smart enough to have some sort of grand design in my creative life. I didn’t pay much attention in school, choosing instead to bury my face in books and comics of my own fancy. But, at some point in my early to mid teen years, I decided that the only way I was ever going to learn to write anything worth reading was to get my hands dirty, either metaphorically or literally - depending on the circumstances. So, at age eighteen, after a teenage wasteland of writing marginal, overly-dramatic poetry and playing in punk bands, I decided to move to the big city and work as an EMT. After ten months on a transport ambulance, I went to paramedic school and became a 911 paramedic in Oakland, where I worked for about three years. It was an experience that showed me a whole new side of life: one filled with suffering, blight, pain, blood, vomit, joy, elation, and adrenaline. And, when that wasn’t new and not quite as exciting anymore, I began the lengthy process of trying to become a policeman. Wouldn’t you know it? They hired me. I’ve been a cop since 2002. I’ve worked a variety of assignments: patrol, in investigations and undercover (something I’m fairly well suited for, because I’ve often been told I look like a ruffian). During my tenure as a copper, I’ve seen friends, coworkers - heroes - murdered in the line of duty. I’ve had close, close brushes with my own demise. I’ve learned what mortal terror feels like, and what seemingly terrible devices each and every one of us has inside to survive. I have done things I am not proud of, but many more that I am. As an outlet for the stresses of my career, and because I think my hands have been suitably soiled during my years of big-city public servitude, I write. I jot down poetry and post it on my ‘professional’ site. I compose silly satire for my stupid comedy site. And, in 2007, I finished the manuscript for my first novel. It’s about a cop, who is the manic, considerably more crazy, bizarro version of me. My father, Stu Silver, is a writer by trade. He’s written films, television, plays and probably the dictionary. (Or so he said to me when I was five.) He once wrote a screenplay that became a major motion picture. I’ll give you a hint as to what it was called; it was about momma and a train... and throwing. In that flick, the protagonist, portrayed by Billy Crystal, says a line that stuck with me when I was a child and still does now that I’m almost a grown-up: “A writer writes, always.” Maybe that’s the grand design? Thanks for reading, folks. Dan.