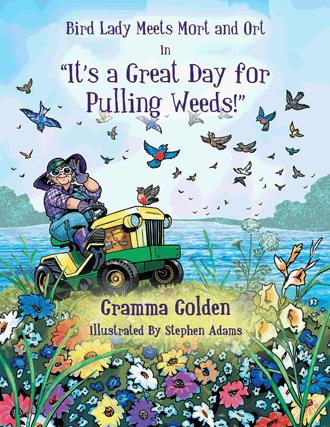 One soggy spring, Bird Lady spent a lot of time weeding her flower gardens. As the fog lifted a little before sunrise one morning, another refreshing rain shower passed through leaving behind a morning filled with stunning sunshine. Entering her garden with the intent to weed, she abruptly heard a gravelly, sing-song sort of voice say “It’s a great day for pulling weeds!” The unusual sound came from the direction of the shed on the side of the courtyard. She lifted and twisted her neck, surveyed the area, yet saw no one. Shrugging, she continued with her plan for an hour or so of wearisome weeding. Minutes later she stretched her arthritic back when unexpectedly, the gravelly voice startled her once more. “I said it’s a great day for pulling weeds!” This time, it was said much louder than the first time she heard it. Bird Lady stood up from her green and yellow padded garden stool, certain now of a stranger’s voice. Very slowly, she thoroughly surveyed the area by looking to the right and then to the left, then up and down the bed of flowers. She turned around and suddenly saw two of the most unusually attractive and vividly colored birds she had ever encountered sitting atop the weather-worn shed directly behind her. They both appeared to have every color of the rainbow blended together as if they were tie dyed. One was more ample and brilliantly colored while the smaller one was more muted in color. Both had the appearance of smooth tie dyed velveteen that reflected like a lovely sheen from the morning sunshine. Suddenly, they leaped from atop the shed to the edge of the wildflower garden. She was astonished at how tall they both were. One was almost up to the pocket of her overalls and the smaller one was only a few inches shorter. They both stood erect on slightly bent dull yellow legs that looked like toothpicks with knees that puffed out and hung down slightly. Their raincoat yellow feet had three toes, one large one in the middle and the smaller ones protruding slightly outward. She couldn’t help but think to herself what an odd looking pair they were. Their conversation continued. “Now you know perfectly well, Mort, that there is never a great day for pulling weeds!” the smaller bird, with an attitude, spoke directly to the larger one. This time, Bird Lady could not believe her eyes or her ears as she stood there listening to two feathered creatures actually talking to one another in words she unmistakably understood. This isn’t happening….it must be a dream she thought to herself. The gravelly voice that came from the larger one distracted her from her thoughts. “Well, Ort, she must certainly think so!” he said while cocking his head at an angle twice toward Bird Lady. “Why else would she be wearing faded blue overalls, a purple plaid shirt with her sleeves rolled up, purple paisley garden boots and muddy greyish purple striped garden gloves, unless she plans to weed?” chimed in the larger bird. By now he was peering directly at Bird Lady with his exceptionally large fawn brown eyes. They must think I look odd too she thought to herself as she gazed down at her muddy boots. Even though she was startled and a bit fearful, there was a look of something eerie yet comforting in those fawn brown eyes. Her fear began to slowly fade away. Bird Lady was compelled to either enter into their conversation or turn and walk briskly to the house for protection. She chose to stand very still and enter their conversation. With trembling voice, she asked the colorful pair, “Are you talking to me? Better yet, are you really talking?” She knew her voice was quivering and shaking but she did not want them to know she was somewhat still afraid of such a beautiful pair of birds. Both creatures looked back at her with those beautiful eyes that twinkled in the sunlight. Bird Lady steadied herself as she began to visibly shake. “Of course we’re talking and we’re talking to you since you’re the only one around right now!” jeered the larger of the two birds. “Let me introduce myself. This is my wife Ort Aahkamort and my name is Mortamert. We were saved from the flood while on Noah’s Ark and have remained on earth since then. Our job is to help people become aware of environmental practices they are currently doing that are harmful to God’s creation. Now it’s your time to listen to what we have to say.” Ort stepped carefully toward Bird Lady and smiled in an attempt to calm her nerves. As she moved closer, Ort held out her right wing until she finally yet softly brushed up against Bird Lady’s left leg. She hugged it ever so gently. With wing extended, Ort looked as if she had wings like an angel. Her hug left a pleasant warm sensation on Bird Lady’s left leg. 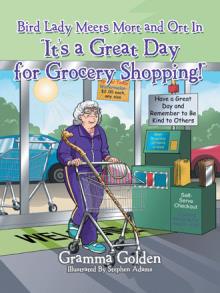 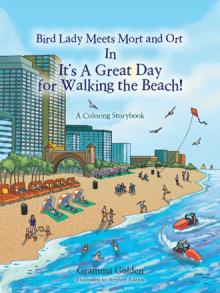 Popular Maine columnist, author, and outdoor enthusiast George Smith confirms in his review that "Gramma Golden's very entertaining books were created to educate children and adults about things we can do to improve and protect our environment. I had a wonderful time last year reading the book to my 3 year old granddaughter" writes Smith. In this tender and fact-filled story, Bird Lady is the one being taught to recognize her careless gardening practices by none other than a pair of unusually attractive and vividly colorful birds, Mort and Ort Aahkamort.

Sitting atop the weather-worn shed directly behind her, they were talking to one another in words Bird Lady could completely understand. At first, she is both startled and a bit fearful when the larger one in his gravelly voice begins to talk directly to her by saying "It's a great day for pulling weeds!"

The lessons that follow throughout the rest of the story result in Bird Lady changing her gardening practices to help wildlife visitors in her gardens. Like the author, Bird Lady has a passion for birds, butterflies, flowers, plants and nature in general. As a result of the lessons Mort and Ort teach Bird Lady, children and adults alike reading this book will learn how to help birds, flowers, butterflies and insects thrive as they visit their own gardens.

Janet E. Golden (Gramma Golden) is a Registered Nurse and Health Care Educator. Lengthy careers in both fields required her to teach others how to care not only for themselves but others as well. Now in her retirement years, she strives to teach young readers to care for and be responsible stewards of the environment in which they live. It is through the author's voice that the characters, Bird Lady, Mort, and Ort Aakahmort come alive helping children understand their role in maintaining the balance of nature. For the past nine years, she has written a monthly newspaper article, IMAGine, for the lake community in which she lives. Topics much of the time address subjects of nature and preservation of natural habitat. She and her husband are passionate about maintaining their gardens and property as both an Audubon Bird and Butterfly Sanctuary and National Wildlife Federation certified habitats. She seeks to teach others how gardening practices often result in the loss of vital wildlife. Janet is a six-year veteran and secretary of the local Board of Education. She understands the importance of all grade levels of education starting with providing a solid foundation at the elementary level. This book offers parents and teachers alike the tool with which to teach children how to help birds, bees, butterflies and insects live and thrive in their own yard and garden. Janet lives in the northwestern part of Illinois with her husband of forty-three years, Keith. They have two adult married children and three grandsons.