CCT-The Eye of the Storm 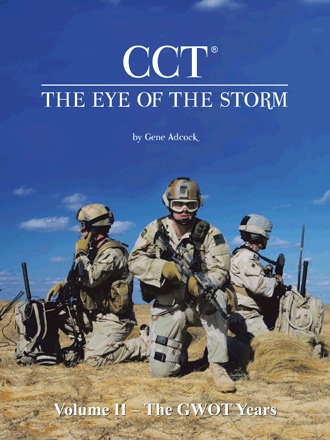 ZACK RHYNER is one, of only three Airmen since September 11, 2001, to receive the Air Force’s highest honor, the Air Force Cross, and the only one who did not receive it posthumously. . A combat controller, Rhyner saved countless lives by calling in more than fifty “danger close” air strikes, many virtually on top of his own position, after his special operations team was caught in a 360-degree ambush in Afghanistan’s Shok Valley in April 2008. Even as he controlled eight Air Force fighters and four Army attack helicopters while perched on the side of a cliff, he laid down suppressing fire so wounded teammates could be extracted from the line of fire. When interviewed by news personality Glen Beck, Beck couldn’t get Rhyner to talk about himself. You make this sound like it was just, you know, another day at the office,” Beck said in a Fox News interview. “But there are only — what is it? — 192 people who have ever received the Air Force Cross... …How do you put that together in your head? I mean, you are part of a very elite group." Rhyner’s response? “Any other combat controller put in the same situation would have performed in the same, exact way” he said. “Credit that to the training we receive and the process that we go through to become a combat controller.” No other Airman would have been more justified in basking a little in the light of fame. Yet given the ultimate opportunity to make it “all about me,” Rhyner chose instead to make it all about “we.” That is a great, great lesson for all of us. ANOTHER AIR FORCE CROSS RECIEPENT - ROB GUTIERREZ was the only joint terminal attack controller involved in the operation on October 5, 2009. The Air Force Special Operations Command combat controller knew the ground situation would be dire if he died. As an armor-piercing round entered his left shoulder and wreaked havoc throughout his chest, he said his focus wasn't on his young family in North Carolina. It was on his team. I've seen those types of injuries before and time isn't your friend," said the Air Force Cross recipient Staff Sgt. Robert Gutierrez Jr. "I thought -- I have three minutes before I'm going to die. I've got to do something big. Based on that time frame, I'm going to change the world in three minutes." The team of 30 U.S. Army Special Forces and Afghan National Army commandos was surrounded in a "Taliban-sympathetic village" in the Herat province of Afghanistan. According to officials' reports, enemy fighters were positioned on rooftops just 10-feet from the team's position inside a neighboring building. Gutierrez was shot during the 4-hour firefight that included sniper and small-arms fire as well as rocket propelled grenades. As the combat controller, Gutierrez was the only qualified radio operator communicating with Airmen overhead to provide close-air support and real-time battlefield surveillance that was critical for the team mission and to be able to evacuate their wounded. "Combat controllers are the air-to-ground interface, bringing the firepower and communications links to the ground force commander," Gutierrez said. "We bring an extraordinary amount of firepower in a small package (that is) able to shoot, move and communicate at the same time." Believing he was about to die, the San Diego native refused to remove his body armor, which held his radio, despite two medics repeatedly ordering him to take it off so his wounds could be treated. Gutierrez only relented momentarily, allowing the medic to insert a needle decompression tube just below his collar bone.

Almost as soon as the second hijacked 767 struck the south tower of the world trade center, Air Force Combat Controllers began to report to their bases and pack their gear. Spread around the world in special tactics squadrons, these airmen would provide the lightly armed U.S. Army Special Forces teams with a number of capabilities that would turn them into world-class killing machines."

"These single Americans had the power to conjure lightning bolts out of the sky.........
....…what happened in Afghanistan is one of the most extraordinary stories in military history."

"Individually, they are specially selected, specially trained, and, in support of special operations, almost daily bring American airpower to bear on our nation’s enemies. Indeed, they are very remarkable warriors, and this book will help many understand why so many of us hold our Combat Controllers in such incredibly high regard."

"…if you asked what tool of the trade would be the very last they would leave behind, you might be surprised at the answer. You would likely hear that it is not a tool that makes one nervous when it isn’t there, but rather a capability that is not organic to a troop of Delta Operators or Navy SEALs"

"Just because you are the best of the best does not mean you are the best at everything. Any Delta operator can vouch for the capabilities of the air force combat controllers, and very rarely goes on a ‘hit’ without the men who wear the scarlet berets."

Gene Adcock, CMSgt, U.S. Air Force (retired) served in the Air Force from 1955 to 1977. As a special operations combat controller, he frequently deployed on classified missions in Vietnam and Laos during the Vietnam war. He is a life-member of the Combat Control Association (CCA); the Air Commando Association (ACA) and was inducted into the ACA Hall of Fame in 2010. He is a life member of the Airlift Tanker Association and President of the Combat Control School Heritage Foundation. Gene’s first military history, CCT - The Eye of the Storm is the story of the early years of Combat Control Teams from World War II to the turn of the 20th Century. His second history book, CCT - The Eye of the Storm, Volume II continues the history of USAF combat controllers. It concentrates on the Global War on Terrorism (GWOT), in Iraq and Afghanistan in the 10+ year period following the terrorists’ attacks on the United States on 9/11. It features the unclassified stories about combat operations, combat training, and humanitarian missions during the period. The contents of this book are unclassified and were cleared for public release. In 1999, Gene wrote Electro-Optical Surveillance for the Security Source Library, ISBN 1-884674-00-3, a publication of CCS Security Publishing, Ltd. The 700-page encyclopedia describes the physics, construction and operation of image intensified night vision devices and thermal imagery. In addition to his books, Gene is a frequent contributor to technical and military magazines.