THE QUEST FOR THE BLOOD JEWEL 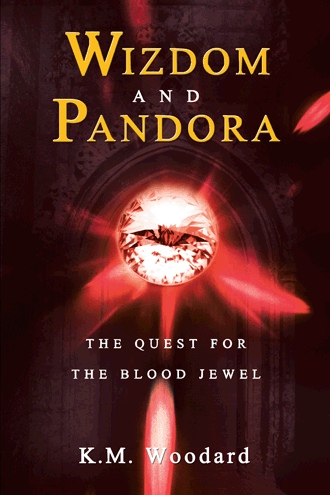 Wizdom didn’t know dragons really existed. He’s never ridden a white woolly mammoth or flown on a griffin. He’s never known a real king or a princess or been friends with a goblin. Wizdom’s never seen elves that glow blue all the time. All he’s ever known are his adoptive mother and his aunt Kayden.
One day he finds himself in a secret world, face to face with dragons and fire monsters. He meets an interesting girl, Pandora, who he learns is no ordinary girl, just as he is no ordinary boy. Wizdom soon finds himself on a magical journey full of secrets, sorcery, danger and evil. He fights many fierce battles and faces certain death as his quest leads him on an adventure like never before as he discovers his true identity…or does he?
“In blending adventure with emotional growth…YA readers will delight in both the wit and gravity displayed by the two protagonists. The packed plot, myriad characters and classic fantasy tropes will keep younger readers engaged and inspired” – Kirkus Reviews

"A lifetime resident of the Washington, DC area, K.M. Woodard has always enjoyed the outdoors and loves to travel. After working 17 years with the MetLife Insurance Company, she pursued her career as a Federal Law Enforcement Agent with Homeland Security and has a Masters Degree in Criminology.
A true Tolkien fan, her passion for medieval and ancient times and her personal travel adventures often inspire ideas for new books. Her active imagination and fascination with escaping reality to a world of enchantment, mystery and suspense has resulted in a series of novels sure to delight readers looking for fast-paced adventure at every twist and turn, interspersed with a smidgen of humor.
Her other interests include collecting new age artwork, painting with oils, gardening, raising tropical and salt water fish, and spending time with family, friends and her two dogs and five cats."