(We are displaced, desperate, damaged, rich, resourceful or dangerous). Who am I? 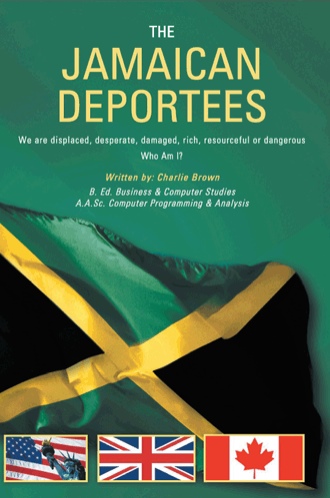 To every cause there is an effect, and deportation has been going on for a while. But since 1996, criminal deportation from the United States especially has become a serious problem to the Government of Jamaica (GOJ). The process involves a remover and a receiver. As a receiving country, it appears to me as if Jamaica has become a 'dumping ground' for numerous criminal deported migrants based on my assessment. Although this book is exclusively about U.S. deportation practices, based on several reasons, the United Kingdom (UK) has increased its deportation figures. As a result; and in addition to the deported persons arriving from the United States and Canada, criminal deportation has become a divisive issue or a serious problem to the GOJ and the society. And criminal deported migrants have been held responsible for the alarming murder rate and other criminal activities in the country, placing some people at a marginal position. According to Government statistics, the United States of America is responsible for the majority of the over 40, 372 Jamaicans who have been deported to Jamaica since 1996, up to 2010. In 2009, 1, 630 Jamaicans were deported from the United States. Of the amount, 1, 262 were criminal deportations, and 368 non-criminal, making Jamaica the country with the seventh-highest number of deportations out of 220 nations (Source: ICE). In 2010, statistics from the ICE showed that of the 1, 548 Jamaicans who were deported, 1, 225 were deported for criminal offenses and 323 were deported for non-criminal offenses. According to the National Intelligence Bureau (NIB), “The number of persons deported to Jamaica for the fiscal year 2007/2008 totaled 3, 132. Of those deported, 2, 636 were males. The U.S.A and UK accounted for the highest number of deported migrants with 46% and 26 % respectively”. 3, 076 persons were deported to Jamaica in 2009. Based on population quota, Jamaica receives the highest amount of deported migrants from the United States as a result of the aggressive and unrelenting enforcement of the IIRIRA. The law is designed in such a way that it prevents most non-U.S. citizens who has been convicted of certain crimes, or sentence to terms of imprisonment categorized as `aggravated felony' , and those that receive `removal orders' from fighting back and become successful .....even if there is merit to some of the cases. The law created drastic changes requiring automatic deportation for people who have committed or those who have been convicted of a wide variety of crimes....even after they have served their time in prisons or remand centers and have become productive law-abiding permanent residents. Even an INS official (now ICE) have criticized the IIRIRA, “As a law that went too far and eliminated discretion in cases where it is indisputably warranted and resulted in the deportation of longtime permanent residents that has a devastating effect on families.” While living in Florida for many years and abide by the law, one of my greatest fear was to go to prison although I was not a wrongdoer. Nonetheless, because the prison system appears as if it is a business in Florida, and it appears as if there is a calculated decision to blemish mostly black people or African-Americans in the `Sunshine State', in such an environment, it is very easy for a black man to be incarcerated. And I watch such a happening unfold right before my eyes. Although I am innocent, I was incarcerated from September 2000 to January 2004. I, like many others, have been moved around to nine different locations during the incarceration. According to King Solomon, “There is nothing new under the Sun” (Book of Ecclesiastes), and I know that half of the Bible is filled with stories of prisoners. As an example, some parts of the Bible were written by a prisoner, Paul the Apostle, who had been incarcerated for some time. From personal experience, I know that when a man is incarcerated alone he is forced to come to terms with himself and with the Creator.....if he chooses, and with the reality of his life presented right before him. I know that, in such a situation, I have to do a reality check. Because of the forty months of direct incarceration, I had a good chance at fighting back at the judicial system in trying to prevent the ICE from carrying out the act of removal or deportation. Through the process, it gives me great displeasure to reflect upon the problems that unfold in trying to escape the unforgiving and inescapable consequences of the IIRIRA. n trying to escape, I familiarized myself with the full details in regards to criminal deportation. Through the process, I conducted a concentrated study which involves a full examination and analysis into the root cause of deportation from America. Such a happening is based upon the existence of a combination of U.S. immigration and criminal justice policies towards convicted non-U.S. citizens. The Congressional passage of the Illegal Immigration Reform and Immigrant Responsibility Act of 1996 (IIRIRA) and its amended and retroactive sections, and the ICE aggressive enforcement , which resulted in numerous removals and several inadvertent deportations to Jamaica, where some people have very little tolerance for deported migrants and their circumstances, which resulted in a serious case of alienation and constant blame. I must substantiate that quite a few are involved in criminal activities based on desperation and other negative factors, but the majority are law-abiding citizens. And there are two types of deported migrants and six different categories of us. The Unites States especially is to be held accountable for a series of issues regarding to increased criminal deportation to Jamaica. Charlie Brown, Author. Kingston, Jamaica.

This book is about the effect of U.S. Illegal Immigration Reform and Immigrant Responsibility Act (IIRIRA of 1996) and criminal deportation to Jamaica; the issues associated with 'deportees' or deported migrants resettlement and re-integration, and increased crime and violence in Jamaica which several 'high-ranking' police officers and policy-makers claimed deportees are responsible for. It also represents a dedicated attempt to bridge both lines of inquiry between increased criminal deportation and increased crime and violence in Jamaica over a period of time, wherein criminal deportees are constantly being blamed for the high murder rate and alarming crime figures in the country, placing deported migrants at a severe disadvantage. Based on six years of studies and notes-taking, I find that there are two types of deported migrants and over six different categories of us and I write in details about the categories. Some people are unreformed or dangerous and are involved in criminal activities based on a variety of factors, while the majority are law abiding citizens. Quite a few, including myself have tertiary degrees, meaningful skills, and 'first world' experiences that are in demand thus we can contribute to the society in positive ways, but we are highly marginalized. And the Government especially, and some uninformed people in the society discriminate against deported migrants (deportees) for arcane reasons. I write about the issues and challenges that some deported migrants have to deal with, the problems that some 'unreformed' or desperate ones have caused, the reasons why re-integration and meaningful support is necessary, how I was abducted or unlawfully arrested by the police and wrongfully prosecuted and unlawfully convicted by a state prosecutor, and how I was sentenced to an illegal term of imprisonment by a presiding judge and then wrongfully or inadvertently deported to Jamaica by the ICE even though I am a veteran of the US Army with a service-connected injury. The IIRIRA of 1996 is a reform of laws that are in need of careful revision in the interest of the 'American Justice' and fairness to non-US citizens who are permanent residents of the United States. A 'must read' edition.

Charles `Charlie' Brown was born on October 9, 1964 in Lyssons, St. Thomas, Jamaica. He spent most of his high school years as a member of the Jamaica Combined Cadet Force (JCCF) and, at age 16+, he became a police cadet and, at age 18, he enlisted in the Jamaica Constabulary Force (JCF) prior to him migrating to the United States where he spent a total of nineteen years, altogether. He is a veteran of the U.S. Army with a honourable discharge, and a 'service-connected' injury that he received while serving on active duty. After studying computer science at the South Florida State College (SFSC), where he obtained an associate in arts & applied science degree in computer programming & analysis, he worked for several government agencies as a LAN/WAN engineer, apple certified desktop technician (ACDT), and a help desk administrator. After further studies, he became a certified network administrator (CNA), certified computer service technician (CST), and a certified electronics technician (CET). After the passing of the US- Illegal Immigration Reform and Immigrant Responsibility Act (IIRIRA of 1996) on September 30, 1996, he was deported to Jamaica on two divisive U.S.-immigration issues after spending forty months in U.S. confinement, all together. Charlie Brown is pursuing a tertiary degree program of studies that will matriculate in a Bachelor in Education (B.Ed.) in Business & Computer Studies with a concentration in computing with accounting at the University of Technology, Jamaica. And is one of the founding fathers of the National Organization of Deported Migrants (NODM). He is the father of one Jamaican-born and three American-born children. He carry-out volunteer duties at several agencies in Jamaica, where he currently live. To contact the author, he can be reached at email: charliebrown1004@gmail.com