JEM AND THE WAR 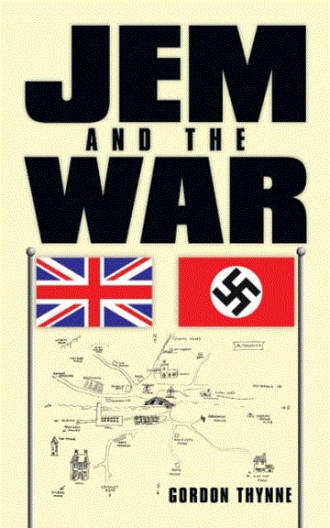 Everything had gone to plan so far, but now was the real test. Jem looked at his watch. It was a . Members of the Homefield platoon began arriving. Some were in complete uniform, others in partial uniform, and some in their ordinary clothes with arm bands. Some carried rifles, some had walking sticks. From his superior uniform and military bearing, he realised that one of them must be Major Rochester, the platoon commander. He was carrying a briefcase. ‘The plans must be in there,’ Jem thought. Soon after seven, he heard sounds of drill: stamping feet, rifles and sticks hitting the floor. Then came a roll call, two members hurried up late and the door was shut.

Jem stole around to the back of the hut. To his great relief, the slim windows were open. He stood on the wooden box, the top of his head just below the bottom of the window. He could hear fairly well. The major ordered ‘Stand Easy’. Then there was a report – perhaps by the sergeant – about attendance and last week’s parade. There was to be a visit to an army range for training in rifle firing and the use of grenades. It was clear from questions, and the tone in which they were asked, that many members were fed up with the delay in providing rifles and full uniforms. At last, they seemed to get down to business, with the major telling the men to gather round. Jem imagined a black-board on which a map was pinned. He began scribbling on his sketch-pad. He gathered that the exercise was to centre on a reservoir. Homefield platoon would be defending the valve tower from which the sluices were operated. The sergeant would command a guard at the reservoir, armed with a Bren gun (borrowed from the army). Parties of men would be deployed at positions around the reservoir, which Major Rochester referred to as ‘Alpha’, ‘Charlie’ and other names. The object was to prevent the Althwaite platoon from penetrating this defensive screen. ‘Kills’ would be scored by visual sighting from a strong position, followed by the throwing of thunder flashes. Umpires would verify kills. Camouflage was important: those who had helmets were to paint a black stripe down the middle or borrow a hairnet from their wives to put over the helmet so that bits of bracken could be fixed in. The major invited questions. It seemed as though the session – or that part involving the exercise - was drawing to a close. Jem realised that his report would be sadly lacking without information on where the positions with code names were. Plan B had to be put into operation. He got down from the box, went through the hedge, picked up the flag and waved it.

The major was about to embark on the peroration, to which he had devoted much thought, designed to raise morale and gear his men up for the exercise. Two loud bangs, coming from behind the hut, interrupted him. What on earth was that? Had German paratroopers arrived? Someone squinting through one of the windows discerned black smoke. A crashed aircraft? There was no time for careful orders. Major Rochester led his men out to whatever awaited them. They rushed through the gap in the hedge, rifles and walking sticks at the ready, and charged up the slope. The oily rags were still making a lot of smoke. Bang! Bang! More of the fireworks went off. Men ducked, as though they were being shot at. ‘Take cover,’ shouted the major, and men dived for stunted bushes and tufts of grass.

Inside the hut, as well as his trembling fingers would allow, Jem copied on to his sketch-pad the plan on the black-board, noting the Alpha, Charlie and other positions. He was so absorbed in this that he failed for a minute or two to realize that the bangs had stopped. It was time to get out. He had reached the door when he heard voices and a shuffle of feet. It was too late! Where to hide? There was a half-open cupboard, but it seemed rather full of stuff. The only other place was the wash-room and lavatories. He dashed inside. There were two cubicles. He went inside one, slid the bolt and sat on the seat. Never had his heart beat so fast, not even at the sight of the first car when he was keeping watch as the Squire and others removed the Hall gates. He put his head in his hands. This was dreadful! If he was discovered with the incriminating sketch-pad, Major Rochester might order a court martial. He felt the need to relieve himself, dropped his trousers and did so as quietly as possible. Then the funny side of his plight caught hold of him. It was as much as he could do to smother a laugh.

There were angry voices from the room. The major was clearly furious at the interruption, saying he would get the police on to the rascals, whoever they were. Jem was relieved. Evidently, Harold and Ron had not been captured. There was the sound of packing up. The platoon was called to attention and dismissed. Men shouted ‘Good Night, Sir’. There was some further conversation between the major and, presumably, the sergeant. Then the sound of the door being shut and locked. Jem was at once relieved

The story is set in and around the fictional in the West Riding of Yorkshire before and during the early part of the Second World War. It follows the adventures of Jem and his pal, Harold. They befriend the local tramp, tackle mysteries and spy on the rival Home Guard platoon. As the war impacts on the village, Jem is drawn into the lives of others: Benjy, the tramp, who tries to become a useful citizen; the squire who comes out of his shell to combat the threat of Hitler; evacuees from Hull; a female artist who is rescued from the clutches of suspicious local women; the veteran who lost a leg in the Boer War; and the ‘wise woman’ who mourns the son she lost to adoption years ago.

Then there is , two years older than Jem, whom he admires: will the rift between them be healed. And will his Dad return safe and sound from the campaign in ?

Gordon Thynne’s career was in the Civil Service in . Part of his boyhood was spent in where Jem and the War is set. He has dabbled in writing for a number of years. This novel, intended for young people, is his first.