Reflections of a Catholic Priest 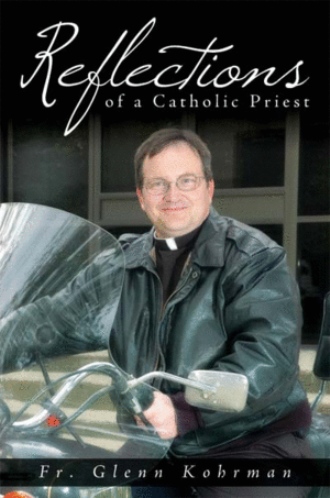 From the Introduction
On some level every person is looking for purpose and meaning in their life.  I felt as though I may be able to make some contribution in helping others reflect on those things in life that give it purpose and meaning and how religion fits into the mix. I believe that one can embrace faith without abandoning reason.  Faith is essential, but it is not alone in coming to recognize the fullness of truth in God.  Augustine's dictum is helpful here, "faith seeking understanding".  I would like to think there is a little food for thought in this chapter.   I would argue that at the heart of any religion is its claims it makes on truth and ultimately how it is distinct from myth. True religion is not a myth, it is very far from it indeed.  I would even go so far as to say that this is the fundamental problem with secular intellectuals, they believe that religion is ultimate myth.
We all have a history.  The second chapter deals with an account of Salvation History and in some sense our intellectual history.  We humans are all in this together, and I am a firm believer that there are experiences or events, even ordeals, that go beyond culture and individuals.  I believe that we can actually learn from each other, and that there are indeed meaningful things to learn.   One can look at two fundamental approaches when looking at history.  The first being one that is agnostic if not even atheistic, H.G. Wells takes such an approach in his History of Man; G.K Chesterton would accept the premise that something was behind all this, his account is found in, The Everlasting Man. This chapter considers the difference and recounts major historical events that shapes Christianity.
A central aspect of salvation history from the Judeo-Christian perspective revolves around the concept of covenant.  A covenant is much more than a contract, it is actually a committed relationship rooted in love.   Salvation History is rich with these covenants that God had entered into with the human family.  One can look at 6 of these with the 7th to come which may be seen as the way in which  God's plan will be fulfilled.
One of the most difficult things for me to accept is that seemingly some people are so slow to even  be open  to the idea of an objective history that goes beyond their own opinion or perceptions.  The truth is rooted in history, if we are honest with ourselves, our experience can lead us to a deep encounter with the truth and take us far beyond any myth and in fact face to face with the One.
The third chapter is a reflection on the priesthood.  The priesthood is a way in which the real presence of Christ can be experienced in the world.  As I see it,  Jesus's ultimate mission was simply to glorify the Father, and to do this He made it possible  that we might be one in Him, as He is one in the Father. (See John 17:20)  Within the last week of starting this introduction, I have had the opportunity to officiate the funeral of the mother of a  friend. She died of Lou Gehrig’s Disease.  I am waiting on a call from a family whose child has just been diagnosed with a serious genetic defect and is not expected to live.  There are things that happen in life that have no fully satisfying answer from a merely human perspective.  There is pain, tragedy, heartache and frustration, but with this strange thing called faith, I truly believe one can make at least some sense of those sufferings that seem so incomprehensible; on the other side of life, its great joys too can be understood.
Priests have the privilege of being present at very big moments in people's lives.  When people fall in love, and they love each other so much they want to give themselves to each other in a public way, a priest is there.  When new life from the grace of baptism is given to children, Christ is made present in those encounters as well. When people die the priest is there to proclaim a message of hope in the face of mourning and sorrow.  A priest at the moment of such tragedies and joys is doing Christ's work, the priest in a very unique way has the opportunity to bring Christ to those situations of loss, suffering, pain and joy.
We could hardly talk about the priesthood without some reflection on the recent scandals in the Church.  As the new millennium passed many allegations had surfaced and indeed some priests had been credibly charged for horrible crimes against children.  When this broke John Paul II was quick to call this a betrayal of  “the grace of Ordination in succumbing even to the most grievous forms of the 'mysterium iniquitatis' at work in the world”.  These crimes, principally against young teenage boys, though in even very rare situations against very young children, are seen by the Church as not only sinful, but a crime.  This has led many to attack the institution and the Church's discipline of celibacy, as opposed to the real problem, namely sin in the world.  Sin, interestingly enough, is defined by the Catholic Church as “offense against reason, truth and right judgement”.   Crimes against children are indeed all of that!
A good priest really is a "father", not to be confused with "The Father".  This chapter also reflects on the dimensions of fatherhood and the exclusive demands it makes on the person.  There is discussion on priestly celibacy and how this has been a general rule, though not an exclusive one, from apostolic times.   From a Catholic perspective Jesus glorifies the Father through the legacy of the Sacraments and the ministry of God's holy people ....

This book is not meant to be a tirade against the evils of the world or a moralizing work that assails a valueless culture spinning out of control.  Rather, I hope to provide some reflections on life as a priest, the world, and what it really takes to be a survivor, both now and for all eternity, and indeed why I am giving my life to the ministerial priesthood of Jesus Christ as understood in the Roman Catholic Church and her authoritative teaching.  The essence of priesthood is to bring Christ into the world.  Literally and really to bring the Real Presence of Jesus Christ,  His Body, Blood, Soul and Divinity into the earthly plain - this is the mission of the priest
Our western culture seems to be moving so fast that it is very difficult to slow down enough to think about those things that truly matter; namely: life, love and truth, not to mention faith which can help us sort out some of the most thorny issues of life.  I am convinced that at the heart of true happiness and being a real survivor in this life are found indeed, love and truth and faith!  To experience humanity most fully, a person must come to grips with who they are and how to live as the result of such self-knowledge.
This book is my attempt to help the reader ponder such questions.

Fr. Glenn J. Kohrman was born in Fort Wayne, Indiana in 1962, attended parochial and pubic schools.  He was ordained a priest in the Roman Catholic Church on November 28th, 1992.  He studied theology in Boston at St. John's Seminary from 1987 to 1992.
Before entering the seminary he studied Engineering at Purdue University.  He received a bachelors and a masters degree in Mechanical Engineering in 1985 and 1987 respectively.
Fr. Kohrman has served as a priest since 1992 and has been assigned to five parishes, one of which was Hispanic.  He also has been an adjunct faculty member of Ancilla College, Donaldson, Indiana and the University of St. Francis in Fort Wayne, Indiana, teaching introductory classes in ethics, philosophy , Hebrew and Christian Scriptures and College Algebra.  He also has assisted in the Diocesan Vocations Office.  He is also Catholic Chaplain for Culver Academies in Culver, Indiana.