Sense and Goodness Without God

A Defense of Metaphysical Naturalism 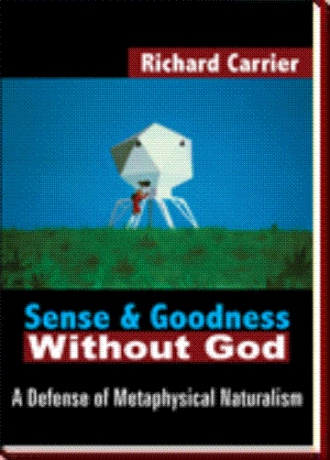 There is one thing I have tried to make clear throughout this book. Metaphysical Naturalism is the only worldview that is supported by all the evidence of all the sciences, the only one consistent with all human experience, the established truths of history, and reason itself. No other worldview, including theism generally or Evangelical Christianity in particular, is supported by any evidence of any of the sciences. The only remotely plausible exception, ‘fine tuning’, is not very convincing evidence for the divine, and supports no doctrine of salvation (see III.3, “The Nature and Origin of the Universe”). Science doesn’t necessarily contradict alternative worldviews, for one can adjust most of them to be compatible with almost any evidence. But no other worldview is directly and substantially supported by any scientific evidence, whereas all scientific evidence so far does support Metaphysical Naturalism, often directly, sometimes substantially. Though naturalism has not yet been proved, it is the best bet going.

Even the facts explained by Big Bang Theory are solely and entirely physical and natural. None are facts about spirits or gods or supernatural entities or powers, and the theory does not include any reference to such things. Insofar as anything is left unexplained by it (such as matters of cosmic order or first cause), there is only humble ignorance. Theories are never scientifically established on what we don’t know or can’t yet explain, but always and only on what we do know and can explain. To argue that science has not explained something, therefore our explanation (whatever that is) must be correct, is not a scientific argument. Such an argument might be good and persuasive, but not because it is scientific—though it may be well supported by science. This is the distinction between science, as a database of facts established by a methodologically sound empirical inquiry, and metaphysics, a speculative enterprise of interpretation and plausible hypothesis formation. You can reject all such efforts to go beyond established science, rejecting all worldviews, or you can adopt the most probable hypothesis: Metaphysical Naturalism.

The title of this book is “Sense and Goodness without God,” because Metaphysical Naturalism is full of sense, and encourages nothing but good. Reason and acute thinking are its very bedrock, and the love of wisdom its main driving force. To be wise and practical is our motto. And this worldview provides adequate, if not strong reasons to devote yourself and your life to high moral ideals, to compassion and integrity in the pursuit of happiness. It is thus a good philosophy—good for you, good for all humankind. And all this without recourse to a god. Though we have found no evidence for any god, and no reason to believe there is one, the sense and goodness of our worldview stands as it is even if there is. It stands on its own terms, on reason and fact.

If God does not exist, then what does? Is there good and evil, and should we care? How do we know what’s true anyway? And can we make any sense of this universe, or our own lives? Sense and Goodness answers all these questions in lavish detail, without complex jargon. A complete worldview is presented and defended, covering every subject from knowledge to art, from metaphysics to morality, from theology to politics. Topics include free will, the nature of the universe, the meaning of life, and much more, arguing from scientific evidence that there is only a physical, natural world without gods or spirits, but that we can still live a life of love, meaning, and joy.

Dr. Richard Carrier is a philosopher and historian with a Ph.D. in ancient history from Columbia University. His work in history and philosophy had been published in Biology & Philosophy, The History Teacher, German Studies Review, The Skeptical Inquirer, Philo, the Encyclopedia of the Ancient World and more. He is a veteran of the United States Coast Guard and emeritus Editor in Chief of the Secular Web, where he has long been one of their most frequently read authors. You can learn more about him and his work at www.richardcarrier.info.