The Author and The Cover Model 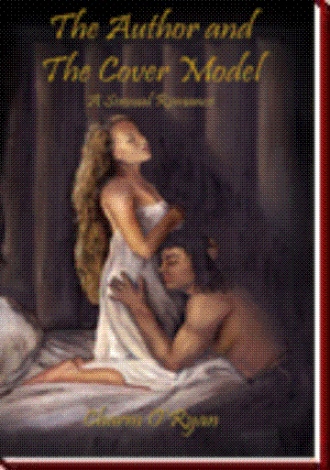 Pride welled inside her.

Zach’s swan-dive onto the bed squelched it instantly.  “Hello, baby.  Nice sheet.”  He wiggled his eyebrows suggestively.  “You get the middle and I get the two sides?”

KaLoni clutched the top of the sheet to her chest with a tight fist, and pressed herself against the massive headboard.  She glared at him, not missing the haughty air emanating from his face.  “You’re enjoying my discomfort, aren’t you?”

He turned on his side, propping his head on his hand.  “Me?  I am wounded, KaLamaiia.  You think me so shallow?”

Rich laughter escaped his lips.  “I suppose I am.  Well hell, you wanted me in your bed.”  He patted the top of the furs.  “Guess you got me where you want me.”

She couldn’t take his arrogance a second longer.  Grabbing a pillow from beneath the covers, she smacked him in the head.  “I hate you -- you pompous popinjay.”  She gave him another whack.  And another.

He took two more blows before grabbing her wrist.  He pulled her down, covering her chest with his torso.  Nose to nose, he growled, “Like it or not, Louise is now counting on both of us.  Stop your childish outbursts and deal with it.”

Suddenly claustrophobic, and feeling a twinge pang of nausea, she spat, “Get off me.”

Without argument, he rolled to his side.

She sat up.  “For your information, Maronaro, I wouldn’t be in this situation if you had just kept your big mouth shut.”

“You wouldn’t be in this situation if you weren’t an aspiring, lust-filled author.”

“Great!  We’re ready to rock and roll,” Brad’s voice interrupted her retort.  “Turn on the fans, dim the lights.  Let’s do us a shoot of profound dimensions.”

KaLoni rolled her eyes.  The man definitely lived in another world.

“KaLoni, this is how it works.  I, or Jacque here,” Brad pointed to a slim elder man now standing beside him, “will tell you what to do.  You must do exactly what we say, when we say to do it.  We’re already behind schedule and all of us would like to go home sometime today.  The shoot won’t take longer than an hour if you obey rather than argue.  Do you understand?”

She squinted against the studio lights.  “Yes, Sir.”  The sooner this madness was over, the better.

The Author and The Cover Model is a cleverly written, humorous, parody of the romance genre. It exposes not only the wrongs in writing romance, but all the rights in love too

A female villain who makes a harpy from hell look like an angel, a handsome, somewhat arrogant hero, and a heroine who believes Fate has made a grave mistake when she finds ‘Mr. Right’ in the wrong man, are only a few reasons those who enjoy romance should read this novel. Fun, quick-witted dialog, and steamy love scenes rise from the ink-splattered pages. It is also a memorable portrayal of a woman’s search for everlasting companionship -- and the fairy tale ending she writes about in her stories.

If you are an avid, paperback romance reader, The Author and The Cover Model is the book for you. It explores the world you love like no other story you’ve ever read before.

A true romantic, she creates memorable characters, capturing her readers from start to finish. She writes from her heart, ignoring political-correctness. Imaginative plots lead to both laughter and tears.

The Table -- Abe and Shania are taken back to 1939 by a century-old table, where they find love and forgiveness.

Whispers in the Wind -- 1497, Drayton and Isabell are pushed together by his dead wife.

With My Last Breath -- 1693, and Timothy face ’s witchcraft trials.