Curly and Tubs and the Galloping Rot 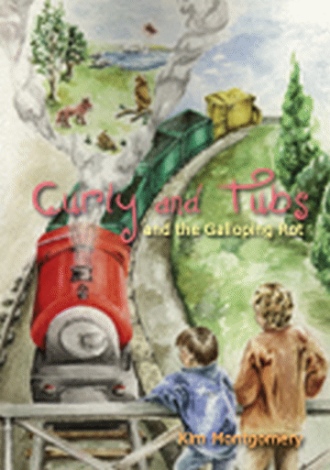 On their way out, both boys took off their jumpers, and threw them on the lower bunk bed. Earlier, Curly had been speculating about where the train would take them next, but he had certainly not anticipated the site that greeted him and his brother as they emerged onto the rear veranda. They recognised the scene immediately, but no matter how many times they had looked at the picture of the African waterhole, it was still a shock to suddenly find themselves right in the middle of it.

Just as with the other scenes in the book, the artist had included as many animals as possible. The idea was to show the wide variety of creatures that might visit the waterhole at any time during the day or night.

“If that lot turned up to drink at the same time, there would be the biggest fight Africa has ever seen,” said Dad, when he saw the picture for the first time.

Well, here they all were, and there was no fighting. Lions and zebras were standing side by side at the water’s edge. A herd of antelope were drinking, whilst crocodiles floated in the water only a few feet away. A giraffe had its front legs spread wide so that it could bend down, and, in between, was a cheetah with her three cubs. Some elephants were standing a little way out from the shore, spraying water over themselves with their trunks, and flamingos waded back and forth, searching for food.

Although the train had stopped right in the middle of the scene, the animals were oblivious of its presence, and passed back and forth through the engine, wagons, and guard’s van. Suddenly, Tubs gasped and then laughed when he realised what he was seeing. An ostrich had stopped just were Curly was standing, and, for a few seconds it looked like there was an ostrich head on his brother’s body.

Knowing that they were safe from the animals, Curly and Tubs could not resist jumping down from the guard’s van, and joining in. They mingled with the lions, and pretended to stroke the huge male. Curly stood in front of a black rhino, one arm held out in a stop gesture, but it passed straight through him. Tubs sat on the back of a leopard as it crouched down to drink. The boys then had a game of chase around the legs of a giraffe.

“I’m going out to see the crocodiles,” said Tubs.

Without thinking, he ran out into the water, and received a nasty shock when his feet made a big splash.

That was when Curly noticed the boat. It was a small rowing boat, lying half in the water and half on the shore. When he saw the warthog walk through it, Curly knew that it was real, and remembered that it was not in the picture in the book. He walked up to it and touched it. It was real right enough.

“Looks like we’re going on a boat trip next,” he thought to himself.

Two young brothers, Curly and Tubs, own a set of encyclopaedias called ‘The World of Knowledge’. An accident, involving spilt tea, threatens to damage volume 5, Nature.

The Council, guardians of The World of Knowledge, decide that the damage would be too great if they wait until the boys realise what has happened, and transport Curly and Tubs from Reader World into The Land of Nature, to do battle with The Galloping Rot.

The boys are standing on a footbridge waiting for a steam train to pass underneath, and envelop them in smoke. An unexpected train approaches, which they recognise as a full size version of one of their toy trains. When the smoke clears Curly and Tubs appear to be in The Land of Nature. They are, in fact, in Essence World, which is where The Council live, and which sits over the lands of The World of Knowledge like a two-way mirror.

The magic train carries the boys across the land to meet The Council, and then on to The Cover Desert, where The Galloping Rot is making rapid progress. The boys have to find a way of defeating the rot, helped by unexpected new powers.

Kim first met Curly on the day they were both born, and Tubs some three years later. The story is unashamedly semi-autobiographical, and much of the first few chapters was drawn from Kim’s childhood in England in the 1950’s and 60’s.

Apart from being a fantasy adventure, it is hoped that the story will stimulate other interests for its readers, especially for books and nature.

Kim now lives in Scotland with wife Irene, sharing most of his leisure time between writing and his garden. The love of nature is still there, with the possible exception of the rabbits which keep eating his plants.