IN SEARCH OF THE SACRED

Dr. Eva Fleischner, a Pioneer Catholic Theologian Whose Search Led Her To Leadership in the Ongoing Process of Ending Catholic-Christian Anti-Judaism 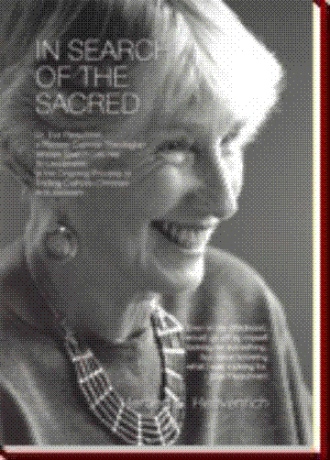 By 1996, Eva had retired as professor of theology at Montclair College, NJ and returned to Milwaukee.  Her closest friends still lived there, including us.  We had learned much from her and others about her life and distinguished career.  After dinner at her apartment one evening, we were bidding “adieu.”  She “lit up the room” with what can only be described as a “blazing, spiritually radiant smile.” I had seen such spiritual radiance emanating from a human face only once before.  In Rome, 1959, we happened to see Pope John XXIII as he passed just ten feet from us.  He had a homely and beautiful face we never forgot.  On impulse, I asked Eva if I might have the honor of writing her life story - if no one else was already doing so.  I felt somewhat presumptuous in asking but felt it was a story that needed telling, if only for the sake of my children who had known her, and especially our youngest son.  She thought it over for a few days, didn’t really understand why I thought this worth doing, and then gave her assent.

At age 74, I wanted to understand how someone I knew well had become the most spiritually developed person I had ever known.  Another part of my interest was what strong motivation had caused her to give up the love of her life, marriage and children, and stay the course?  Several years after starting her life mission, she became ever more known on the “world stage”.  Her renown gave me all the more reason to chronicle this evolution of joyous faith and inner beauty.

By 1958, Eva had continued to develop a particularly strong interest in the liturgy of the Church.  A unique graduate program in liturgical studies was being offered at Notre Dame University. The Grail sent Eva there for four consecutive summers, together with two other Grail women.  “There was much scripture study, to which I took like a ‘fish in water’.  We learned about the new movements in religious education ... the catechetical renewal. You were exposed to some of the most brilliant minds in the Church from all over the world.  It was something of a replay of what I had met in France, and a bolster to my initial enthusiasm for the Church renewal. At the conclusion of her studies at Notre Dame, she was awarded a Masters degree in liturgical studies.

In one of our interviews, Eva stated that the first stirrings of her interest in Judaism occurred at Grailville as a result of her study of the Hebrew Scriptures.  “The Bible attracted me very strongly, and I still feel to this day that I am more of a Hebrew Scripture person than a New Testament person in some ways.  I know many Psalms by heart and these texts became very important to me.  Through them, they were my first connection with Judaism.”

Dr. Eva Fleischner, Ph.D. became a  world-class theologian after undergoing dramatic and traumatic turning points in her life.  After a happy childhood in , and raised as a Catholic, life turned bitter as they fled from the Nazis because her father was born a Jew.

She found her spiritual home at Grailville, a lay Catholic women’s apostolic movement.  At , her Ph.D. dissertation became the foundation of her main mission in life.  Eva became increasingly active and worldly prominent as a Holocaust scholar, lecturer, writer and member of important Boards and Commissions aimed at changes in Catholic teachings that had demonized the Jews for 19 centuries.

The book Chronicles the exponential growth of serious Catholic/Christian-Jewish dialogue since World War II, and relates this trend to global historic changes, the ingredients of mankind’s continuing evolution.

A veteran of WWII, Heavenrich encountered the early story of his subject while writing the draft of a book, The Prefabrication of Houses, at M.I.T. in the late 40’s.

The Author has had successful careers in business, academe and government.  As Milwaukee’s Director of City Planning, he was asked to write the first example of A Comprehensive Plan for Large Cities, published by ASPO, and sent to all large cities by HUD in 1974.

He holds a BSE. From Univ. of Michigan and an MBA from Univ. of Chicago, both with high honors.  Doctoral work was done at U-W Milwaukee, in Urban and Economic Geography and General Systems Theory.  As a member of the Reformed Jewish sect, it was Eva’s revelation to him of the major causes of anti-Semitism that inspired him to write about their friend, Eva.