In A Dream, In A Vision of the Night

by Susan Noone Riddle 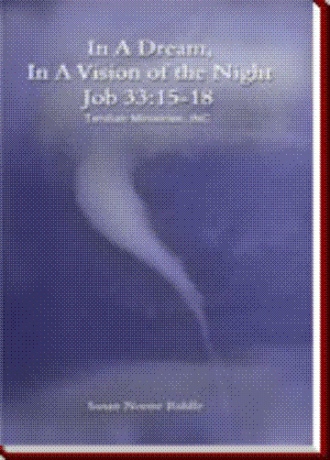 As a child I can remember having dreams that really influenced my life. Many times they were vivid and so real. As a teenager, I began to have dreams that came true. Some of them were very serious. My mother was always encouraging, viewing this as a gift from God. There was little available at that time that actually taught what the Lord says in the Bible about prophetic dreams and visions. The only thing that was available was "Psychic" and "spirit guide" type of stuff. In my heart, I knew something was off where all of that was concerned.

Entering my teenage years, I attended a revival in a church where the supernatural was frowned upon. Being saved and rooted in this church, I was never taught about how to walk in the Spirit, or resist the devil. Unfortunately, no matter how much I loved the Lord and wanted to serve Him, I backslid. While actively attending this church, I experienced many vivid dreams. I spoke to the Pastor of this church about it, earnestly seeking help. He shared his view that God did not speak to His people prophetically in dreams anymore. He also said that it was the devil who used people in this way for evil. In his experience and belief system, the devil was powerful and supernatural, and the LORD was not! I believe that even though he meant well, this confused me greatly.

Needless to say, I was terrified and closed my heart to the supernatural! Thinking that the devil could use my mind in this way caused me to close my heart to the possibility that God would speak through dreams and visions. It was difficult later in life to believe that God was more powerful than the devil and kingdom of darkness!

It was not until after I was married and came back under the grace of God that dreams began to surface again. Once again He began to pour out His Spirit in a manner that really got my attention. A wondrous journey began as He taught me about His language in the Spirit and from His Word.

It is for this reason that this book concerning dreams and visions has come about. In ministry, I have encountered more than I can count who do not understand what they see and hear in the night season. It is evident that we are in the latter days. Soon our Lord will return! When the Spirit was poured out at Pentecost, Peter quoted Joel 2: 28-31 when he said in Acts 2, "17 - And it shall come to pass in the last days, says God, That I will pour out my Spirit on all flesh, Your sons and daughters shall prophesy, Your young men shall see visions, Your old men shall dream dreams, 18 - And on My men servants and My maidservants." Peter was speaking of the days before the return of the Lord. No one knows the day or hour that He will return, but He did tell us to discern the times. The signs we see today of the eminent return of the Lord are very clear. The light of the Lord is getting brighter, while the darkness is getting darker. Though the devil is busy blinding the eyes of the world, the Lord is beginning to pour out His latter rain! The Spirit is beginning to move in the body of Christ like never before.

One of the ways that He is moving in and through His people today is in dreams and visions. This is more and more evident in this 21st century. There is rarely a day that goes by that some sort of communication from someone in the body of Christ about a dream or vision they have received from the Lord comes across my path. The Lord has poured out his anointing on me in order to be able to reach in the Spirit and discern what a dream may mean according to the Scriptures. At times I see the dreams as though I had them myself! Other times, I may receive revelation from the dream after a period of prayer. I believe that the Lord has called me to train and teach other believers truths from His Word so that they can in turn teach and train others how to understand the imagery of the Bible and how it relates to the parables or dreams we receive. For certain, none of the ability to interpret dreams or visions comes from man. If the Lord does not reveal the interpretation by His Spirit, there is no interpretation. Dream interpretation is part of the gifts of the Spirit including prophecy, discerning of spirits, words of knowledge, and words of wisdom, and must come from the Holy Ghost. (1 Corinthians 12: 11) As the Lord continues to pour out His Spirit in these last days, more and of God’s people are going to see and hear the Lord through dreams and visions. It is so important that we know the Word of God. The Word of God will interpret itself.

In the Old Testament there were different types of Prophets. One type that is described is the "Seer." I believe that many seeing Prophets are rising up to aid the body of Christ in these perilous days.

In A Dream, In A Vision of Night is a book that emphasizes the importance of God’s guidance to His people through dreams, visions, and trance like pictures we receive in the night. This book explores and teaches what the Bible says about dreams, whether or not dreams come only from God, what symbols in dreams mean according to the scriptures and more.

Many dreams are given as examples of prophetic dreams. Includes a symbols dictionary.

Susan Noone Riddle was born in Franklin, Louisiana. She and her family spent six years in Manila, Philippines. Mrs. Riddle returned to the United States to finish high school and college at Louisiana State University.  Charles and Susan met and married at LSU in 1978.  They have three sons and a three beautiful grandsons.  Their sons are, Addison, 25, John 23 and Micheal, 20 years old.  Their grandsons are: Collin, 3; Easton, 16 months; and Landen, one month old.

Susan has a degree in both education and theology.  She obtained a Masters Degree in theology from Christian Life School of Theology in Columbus, Georgia in November 2000. She has been a worship leader to the body of Christ for seventeen years.  Charles and Susan are available for ministry in your churches. Contact them at: Tehillah77@aol.com.