Get everything you need to publish your
own book, starting with a publishing guide.

Any writer or reader worth their salt would be familiar with the term “protagonist.” From the Ancient Greek word prōtagōnistḗs meaning “one who plays the first part,” the protagonist is the character without whom your story wouldn’t even happen.

Stories typically follow someone who has a goal to achieve. To establish your protagonist, you must figure out what their goals and motivations are—and what conflicts you can throw at them to keep things interesting.

You can pick from an infinite number of things that someone wants to do, but you should know why they’re motivated to pursue that particular goal. Think of Abraham Maslow and his hierarchy of needs. Maslow basically proposed that all human behavior is driven by intrinsic, universal needs: basics, belongingness and esteem, and self-actualization. Before reaching self-actualization, you’re meant to cover the four other levels first. 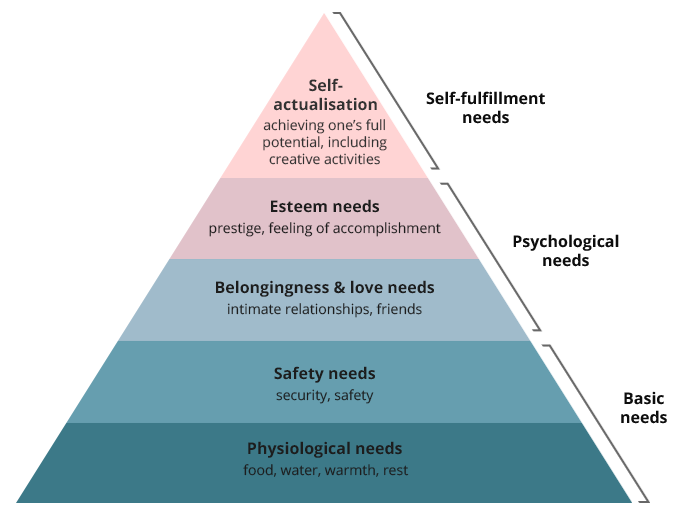 By Androidmarsexpress - Own work, CC BY-SA 4.0

If you say you’d kill for a burrito right now, that’s you stating your goal (to kill) and your motivation behind it (food). The lengths to which you’d go may be preposterous, but any human reader would relate to the need to eat.

You should keep in mind that Maslow’s hierarchy wasn’t perfect; it’s totally possible for you to lack something on a lower level and still need something on a higher level. In the writing context, that means you can give your protagonist more than one need from any level. And for every need, think of things that they’re willing and/or able to do to attain it.

Sans conflict, your protagonist would simply proceed from point A to point B. They want to do something, they achieve it. Not much of a story, right? But as you may well know, art imitates life—there is always some type of conflict that arises and creates tension in your pursuit of your goals.

Conflict can either be internal, which is also known as Character vs. Self, or external, which is split into five types. Giving your protagonist both an internal and external conflict can keep them from becoming a one-dimensional character that readers won’t keep turning pages for.


Character vs. Self manifests in a character’s struggle with their own conflicting feelings, desires, beliefs, or mental illness. In Daniel Keyes’ Flowers for Algernon, you see Charlie Gordon wanting not only to be intelligent but also to salvage his relationships with the people who resent his intelligence. Layering this type of conflict on one or more external conflicts can really help your readers empathize with your protagonist since everyone has known some kind of internal strife at some point in their lives.

Character vs. Character is your typical good vs. evil story where the protagonist and the antagonist have conflicting outlooks, opinions, or goals. You see this very clearly in Victor Hugo’s Les Misérables, with Jean Valjean’s and Inspector Javert’s clashing opinions on justice and mercy. This type of conflict becomes more complex when you make the reader root for both sides.

Character vs. Society has your protagonist struggling against expectations, institutions, laws, or other societal constructs. In Harper Lee’s To Kill a Mockingbird, defense attorney Atticus Finch withstands the pressure of racist 1960s Alabama and represents Tom Robinson, a Black man wrongly accused of raping a white woman, to the best of his ability. With this type of conflict, you should explore your protagonist’s values and test their commitment.

Externally, Character vs. Technology is used to imagine the problems that arise when science gets out of hand, but it also lets you examine humanity in the best or worst light. In Mary Shelley’s Frankenstein, Dr. Frankenstein creates life out of body parts from a graveyard, but his well-intentioned creation frightens everyone and blames his creator for all this misery.

Character vs. Nature can have your protagonist either fighting for survival or battling for dominance in the face of the weather, wilderness, or natural disasters. In Daniel Dafoe’s Robinson Crusoe, Crusoe learns to shelter himself from the elements, farm crops, and hunt game to survive the remote island he has washed up on. This type of conflict makes your protagonist confront their role in the natural order of things.

Character vs. Supernatural pits your protagonist against unbelievable, inexplicable forces like magic, fate, deities, or otherworldly beings. In J.K. Rowling’s Harry Potter series, Harry contends with the antagonist Lord Voldemort in a Character vs. Character conflict, but he must also come to grips with his fate of being the Boy Who Lived, the one who is prophesied to defeat the Dark Lord. While this conflict type seems juvenile, many great writers draw great parallels to entirely believable and explicable human woes.

Writing a book can be paralyzing when you have endless possibilities, but once you get to know your protagonist, you start to make your path to the finish line clearer. Soon you’ll be able to make decisions regarding other elements like theme, tone, setting, additional characters, and more.

Fill out this form now!

By clicking "Claim My Free Guide", you are providing your electronic signature, voluntarily authorizing AuthorHouse and its affiliates to contact you using a manual or automated telephone dialing system and send you advertisement or telemarketing messages by email or text/SMS/MMS message to the address and phone number you have provided above. You are not required to agree to this in order to buy products or services from AuthorHouse. You certify that you are over the age of eighteen (18). You'll get up to ten (10) messages per month. Standard message and data rates may apply. Click here to view our Privacy Policy.