In Favor of the Saints

Living, Standing And Taking Possession of the Kingdom in This Evil Day 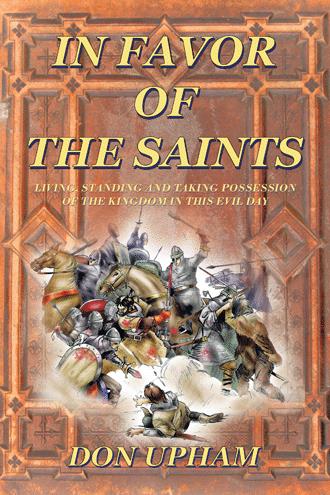 The Ancient of Days will pass judgment In Favor of the Saints… …When the Saints begin to take possession of the kingdom! Dan 7:22 This book is for equipping all the Saints, not just the ones in professional ministry! You will learn: • You are called to be a minister and a testimony • Knowing the Lord’s voice and how you must and can • Effective armor in Spiritual War • What is a kingdom and why you are one? • Taking possession of the kingdom you were made to be • Establishing the Lord’s authority thru prayer and praise • Getting people out of the dominion of Satan, to God • About changing time and law (This is not daylight savings!) • Getting out of the POW camp and back into the war This is all about you: Living, Standing and Taking Possession of the Kingdom in this Evil Day

DON UPHAM would be considered a layman in most circles. BS in Industrial Arts, Navy Helicopter pilot and 24 years as a Fire Fighter, Paramedic, Captain and Battalion Chief with the Los Angeles County Fire Department. But Don also completed three years of an M. Div. at Louisville Presbyterian and Fuller Seminaries. He served as a ministry intern and youth pastor during the 1970’s. During the years of his secular employment he actively served as a Sunday school teacher, elder, fire chaplain and mission’s leader while also completing a M. S. in Education through Pepperdine University. Don was a video and television producer for Ed Silvoso between 1994 and 2002, traveling to Argentina, Brazil, Hong Kong and Norway with Harvest Evangelism. Don and his wife Janice currently live near Christiansburg, Virginia