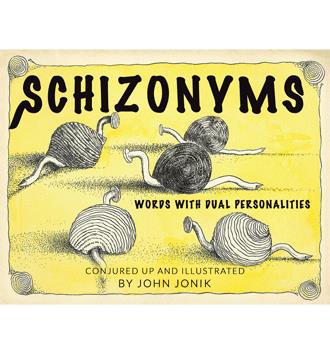 John has always been interested in words and the meanings behind the words. Maybe it was the family Scrabble games, where he found himself vying with academic parents and competing brothers for the perfect “triple word score”, or John’s life-long passion for crossword puzzles. In any case it was not a surprise that John would eventually hit upon the unique idea of a visual pun, which he called a SCHIZONYM! John, in his own words, describes the genesis of this creative approach. “Once I noticed that some words became another word, when the first letter was removed; it was automatic for me to draw or illustrate the distinction. And then I did more of them to the point where they were an obvious collection. The word "schizonyms", relating to the word's split personalities, applied easily.” Viola!

John Jonik is a nationally recognized cartoonist based in his hometown, Philadelphia, PA. In addition to cartooning, John is a multi-dimensional artist: painting, wood sculpture, esoteric collection arrangements, commercial art gift design (ornaments, mugs, snow domes), and murals are some of his creative endeavors. He is an active member of a unique Philadelphia Art Collective, The Dumpster Divers. Their work, and John’s sculpture, can be viewed on the website, Unexpected Philadelphia. John has exhibited his work in galleries in and around Philadelphia. A significant body of John’s lifetime art collection has been accepted by the University of Pennsylvania Library Archive Collection. John presents his Bio in his own words: "I have been drawing cartoon since his Catholic grade school, when sketches of nuns with guns holding us kids as prisoners were a hit...except with the nuns. In High School, the school paper used cartoons, and I did quick cartoon sketches on blackboards between classes. In college, the Villanova University student newspaper used editorial cartoons, but I left there after only a year or so to attend the Pennsylvania Academy of the Fine Arts, a Philadelphia institution, to sharpen drawing abilities and to also take up painting. Paintings were mostly landscapes, real and imaginary. At the same time the now-gone Philadelphia Bulletin used my editorial cartoons a few times. Also around the same time, in the 1960s, comic cartoons were getting accepted. The list grew to eventually include The New Yorker, Playboy, National Lampoon, Cosmopolitan, Better Homes and Gardens, Wall Street Journal, Esquire, and others...including even once in Mad magazine. A couple of New Yorker cartoons, by luck, with publisher's permission, were turned into manufactured giftware items that did well in that market. Along the line I began doing editorial cartoons also. They went mostly to political and environmental groups' publications around the country. In current times, since 2010 or so, I haven't done much cartooning, but past published work, for which I retain rights, are being used by Funny Times, American Bystander and a few others.”