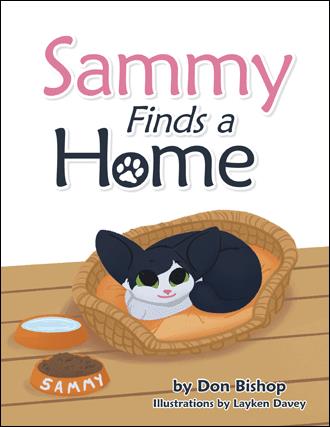 Sammy was born in an old barn on a cold gray night in late winter. His mommy cared for him and his 3 brothers and sisters the best she could. Eventually, Sammy was forced to go out in the big world full of scary things. Sammy found a boy walking down the street and followed him home, but the boy was mean and Sammy had to run away, In his adventures, he found a loving couple who fed him, and gave him a warm, comfortable home. His life had some exciting moments though, including getting lost again, but eventually being found by the loving couple who took him in.

"Sammy Finds a Home" is a true story about a cat born in the wild, and adopted by a caring and loving family. His first adventures take him to dangerous places, until he finally finds a wonderful home.

A relatively new author, Don Bishop previously published a book about his experiences in the Vietnam War. His current book is crafted for children, relating the early years of "Sammy", a stray cat.