A Trilogy: Seed of Birth, Destruction and Restoration 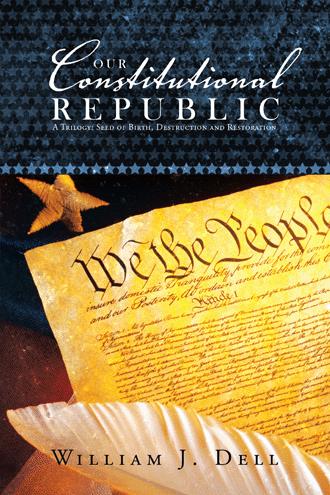 CHAPTER 4 A CONSTITUTIONAL REPUBLIC DEFINED In 1787 at the close of the Constitutional Convention, a lady asked Benjamin Franklin, “Well Doctor Franklin, what have we got – a Republic or a Monarchy?” He is quoted as saying, “A Republic, if you can keep it.” This chapter contrasts the differences between a democracy and a republic, and explains why the Founding Fathers wanted a republican form of government. It is significant that the Founding Fathers did not use the word “democracy” in either the Declaration of Independence or the Constitution of the United States of America. Nor does the word “democracy” appear in the constitutions of any of the fifty States. In fact, Article IV. Section 4 of our Constitution reads: The United States shall guarantee to every State in this Union a Republican Form of Government, and shall protect each of them against Invasion; and on Application of the Legislature, or of the Executive (when the Legislature cannot be convened), against domestic Violence. (Emphasis added.) Our Founding Fathers understood the excesses of a democracy and they wanted to avoid them for our nation. In the discussion which follows the reader must bear in mind that present day definitions of these two political terms – Republic and Democracy – have been blurred, merged and used interchangeably. Historically the definitions were vastly different. In 1917 while seeking a declaration of war against Germany (World War I), President Woodrow Wilson said, “The world must be made safe for democracy. Its peace must be planted upon the tested foundations of political liberty. We have no selfish ends to serve. We shall be satisfied when those rights have been made as secure as the faith and the freedom of nations can make them.” With this began the progressives “intentional” efforts to change the thinking of We the People from living in a Republic to living in a Democracy. They began to equate the two to achieve their over-arching goal of global governance through socialism. If we are to save our Constitutional Republic, We the People, as individuals and as a nation, must understand, as our Founding Fathers did, the difference between a Republic and a Democracy. From Noah Webster’s 1828 Dictionary, we get the following definitions: Democracy, from the Greek people to possess, to govern. Government by the people; a form of government, in which the supreme power is lodged in the hands of the people collectively, or in which the people exercise the powers of legislation. Such was the government of Athens. Republic, from the Latin res publica; public affairs. 1. A commonwealth; a state in which the exercise of the sovereign power is lodged in representatives elected by the people. In modern usage, it differs from a democracy or democratic state, in which the people exercise the powers of sovereignty in person. Yet the democracies of Greece are often called republics. These 1828 definitions would be closer, only 40 years removed, to the Founding Fathers understanding of them at the Constitutional Convention in 1787. A close reading of the definitions will lead us toward a better understanding what our Founding Fathers understood was the difference between the two terms – democracy and republic – rather than our present day understanding more than two centuries later. A democracy is a type of government and is distinct from other forms of government; such as, monarchy, autocracy, or oligarchy. Democracy began in Greece during the Sixth Century BC with Solon in the Athenian City State. Solon’s written regulation for the Athenians became the first ever effort to govern by written and permanent law. This was not to be capricious “Ruler’s Law” subject to the whims of the ruler, but a fixed codified set of rules obeyed by rulers and the people they governed. In Solon’s own words, “when the people obey the rulers and the rulers obey the laws.” A democracy with a written and codified law however is not enough to create a Republic where “the people” are the rulers. Democracies can be very tyrannical if a proper framework of governance is not also established by the people. The following is a series of quotes concerning Democracy: “Democracy is more cruel than wars or tyrants.” — Seneca “Without checks and balances, monarchy becomes despotism, aristocracy becomes oligarchy, democracy becomes mob rule, chaos, and dictatorship.” — Cicero “The man chosen as leader by an ungoverned populace, is someone bold and unscrupulous, who curries favor with the people by giving them other men’s property. — Cicero “The world is weary of statesmen whom democracy has degraded into politicians.” — Disraeli “Democracy gives every man the right to be his own oppressor.” — James Russell Lowell “Remember, Democracy never lasts long. It soon wastes, exhausts and murders itself! There never was a democracy that did not commit suicide.” — John Adams The history of republics begins in the Roman Empire. In 454 BC, the Roman Senate sent three men to Greece to study the rules of Solon. On their return the Decemviri, a temporary legislative commission of ten men that supplanted the regular magistracy from 451 to 449 BC, was established which developed The Twelve Tablets that became the written constitution of the Roman Republic. The Tablets were based on Solon’s laws. The difference between Greece and Rome was that the Romans included in their effort a structure of “checks and balances” to protect their citizens. Eventually the Roman Republic decayed into the Roman Empire ruled by the Caesars. Even during this period however The Twelve Tablets still retained a status similar to English Common Law. All of this led Tacitus to lament, “It is easier for a republican form of government to be applauded than realized.” When the Constitutional Convention met in Philadelphia in 1787 they were presented with the Virginia Plan. A series of resolutions that exceeded the stated purposes of the convention to modify the Articles of Confederation. Most of the delegates understood that there needed to be a stronger federal government if the new nation was to achieve status in the community of nations.

What more can be said about a book than that all Americans should read and think about it? In this time of challenges for America, here is a reasonable, readable, passionate, balanced book telling the tale of our nation's meaning from before its founding until the present day. It captures the original American spirit of hunger for liberty and opportunity, of love of God, and of reverence for honest hard work. Written by a man who has served our country all his life and knows why he has done this, the book reminds America in reasoned words and well-written prose of our founders' words and intentions. Will echoes patriot voices, old and new, holding up a standard of truth, self reliance, tolerant mercy to others, and most of all — the standard of liberty. Will traces our founding principles, the rise and effect of progressive politics, and the horrible threats America faces today. He explains how we must all be aware and active. Most importantly, he tells us all what we can and must do to see that America does not perish from the earth. Today, Americans need this book. We need to read it before our next election. Enjoy and profit from your time with Will —, I have!

William J. “Will”Dell is an ardent patriot and a retired Navy Master Chief who served his nation for 25 years during the Vietnam era. He has made a concerted study of the Constitution, the Founding Fathers, and the history of our Constitutional Republic over the past 60 years. He has three imperatives in his life: God - Family - Country. He makes no apology for his Christian faith. He knows beyond any shadow of doubt that God raised up our Founding Fathers to establish our Constitutional Republic to be a beacon of freedom to the world. He is a strict Constitutionalist as it was interpreted for the first 150 years of our history. He believes that it is the responsibility of We the People, as individuals and as a nation, to be vigilant in the preservation of our Constitutional Republic, our Judeo-Christian heritage, and the unalienable rights we received from God to Life, Liberty, and Property. Will is an enthusiastic family history buff. He has discovered direct ancestors on his family tree who have served in every major conflict our nation has been in since the Revolutionary War. A family tradition that continues as a daughter and grandchildren have donned the uniform of their country in defense of liberty. Throughout his naval career, Will traveled the world and lived in both Europe and Asia. He has also traveled extensively within the United States having visited museums, libraries, and historical sites in 48 of the 50 states. Will has a degree in business information systems. Will, a life member of both the Disabled American Veterans and the Veterans of Foreign Wars, is retired and makes his home with his wife, Fran, in Arizona when they are not traveling, doing family history research, or visiting their children, grandchildren and great-grandchildren.