The Life and Legacy of “Allen Subdivision”

An African American Community from the Early 1900s to 2015 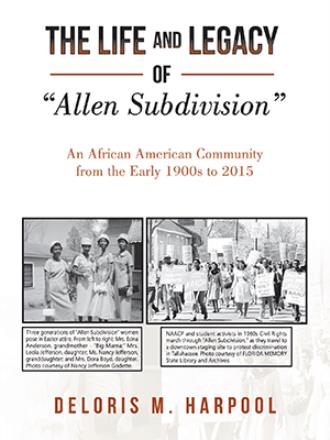 How can a people rise through bigotry, and racial/social injustice? How can they thrive on meager fare? The Life and Legacy of “Allen Subdivision” presents life for a people who rise in spite of humble beginnings and unfair circumstances. It describes an African American community from its inception, where over 90 bustling businesses emerged. It offers an iron-clad, close-knit ‘village,’ blessed with continuous dosages of spiritual fortitude, sage advice, impenetrable love, protection and ingenuity. It describes happy times and challenges, home-grown foods, home remedies, ‘make do’ meals, make-shift toys, and yet, fascinating biographies of successful residents. “The author has done a remarkable job of telling the Allen Subdivision story. I am impressed by the unmistakable love she poured into describing the pleasantries, struggles and triumphs of the folks in this humble neighborhood. She takes me down an entertaining and amusing memory lane. And, she reminds me of how blessed I am to have grown up in a similar community. This work speaks to the important role such a community played in the development of resilient, productive and contributing African American citizens.” Barbara R. Cotton, D.A., History Professor Emeritus Florida A&M University, Tallahassee, Florida “In this book, Harpool illustrates that it truly took a village, including once thriving neighborhood businesses, to produce the fine caliber of African American leaders of today. This type of history is lost in many communities. Her work documents a great legacy and preserves history for future generations. It candidly enlightens readers about African Americans surviving with meager means, including drinking Kool Aid flavored water and eating meatless sandwiches. The irony of it all is how our people have added significant contributions and flavor to the benefit of our city, state and nation, despite these experiences.” Dianne Williams-Cox, Commissioner City of Tallahassee, Florida

Deloris Mills Massey Harpool is a native of Tallahassee, Florida. She was raised with six siblings on Hudson Street in the south central Tallahassee neighborhood called “Allen Subdivision.” She earned a Bachelor’s degree in Sociology and a Master’s degree in Counseling at Florida A&M University (FAMU). She attained the designation of Certified Public Manager (C.P.M.) at Rutgers The State University of New Jersey. In 38 years of professional service, Harpool provided leadership in educational access/equal opportunity programs for students and for executive and administrative personnel in colleges and universities throughout Florida and New Jersey. In the same genre, she served as a consultant in the Republic of South Africa with the United States Agency for International Development (USAID). She is a Life Member, who attained “Golden” status after over 50 years of membership in Alpha Kappa Alpha Sorority, Incorporated by 2018. After retiring as a higher education policy and program director, Harpool became aware of and concerned about notable physical changes in the beloved, ‘home place’ where she grew up. Due to urban redevelopment and imminent domain, the number of businesses and families in this humble, but once vibrant African American neighborhood was sadly declining. Yet, beginning in the early 1900s, in spite of segregation, discrimination, disparities in economic opportunities and other Jim Crow practices, this little known community thrived and produced African Americans and descendants of remarkable success. The profile of the author’s daughter is a working example of many human resources who were greatly influenced by their parents’ ties to “Allen Subdivision.” The current Kyra Massey Kennedy was born to the author and the late Edward E. Massey, while her parents studied at FAMU. With her own husband, Warren, Kyra blessed the author with five grandchildren and one great grandchild. The author’s insisted on high academic achievement and postsecondary higher education. Her loving support toward a Science, Technology, Engineering, and Mathematics (STEM) field sharpened Kyra’s early interest in pursuing Engineering. This elevated her determination to maintain high academic standards throughout middle and high school. She received a four year scholarship in Mechanical Engineering. With hard work, prior to marriage, she received a B.S. degree in Mathematics, with a minor in Mechanical Engineering at FAMU. By 2016, Kyra became an inventor, whose products and intellectual property were registered with the United States Patents and Trademarks Office (USPTO). In 2021, while studying online and remaining a devoted wife, loving mother and grandmother, successful multi-business owner and community servant, Kyra earned the MBA degree in Marketing. She is currently pursuing an online doctoral degree in Organizational Leadership via Scottsdale, Arizona’s North Central University. Harpool acknowledges that other success stories for “Allen” residents and their descendents deserve to be shared. When Tallahassee’s redevelopment efforts began to unfold, and information was scarce, it became evident that no deep-dive review of the cherished “Allen Subdivision” had ever been published. Its legacy and its effect on its sons and daughters and their descendants begged action. To memorialize and preserve its rich history, Harpool saw the urgency and accepted the community’s challenge to document the unique character and some of the consequential effects of this treasured place. This book is the first of its magnitude that Deloris Harpool has authored. While her research was well underway in 2015, she contributed to a report produced by FAMU History professors that included key facts about “Allen Subdivision.” Their report also described other communities connected along Tallahassee’s FAMU Way. In addition to research results for three other “Allen Subdivision” historical markers, she produced content to be displayed in the local Blueprint Intergovernmental Agency’s History and Culture Trail Project. She offers these works with hopes that they will enlighten, entertain, uplift and inspire youth and all readers to explore these and other African American community success stories.