Innovate the Way You Were Designed To 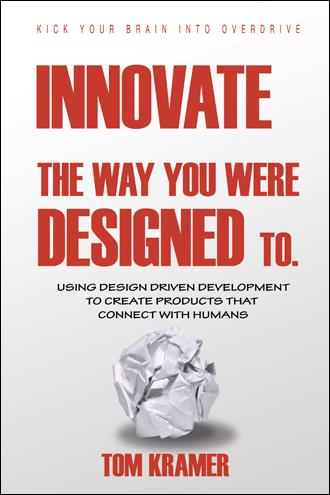 Your brain was designed to solve problems Much of the ability to be successful in creative mental activities comes from an understanding of the parts of the brain and how they were designed to work. One important thing to understand is that the part of your brain that is responsible for creative problem solving is in your right hemisphere. We often believe that engineers are left brained people, and when they have mechanical or functional problems to solve, they use their superhuman left brained superpower to do it. This couldn’t be further from the truth. Our team was attending a seminar from the Institute for Brain Potential, and they revealed that the part of the brain that gets the humor of a joke is the same part that solves problems, and it is on the right side. This means that exercising the right side of the brain with humor, art, and other types of abstract thinking could strengthen the part of the brain responsible for creative problem solving (because it is neuroplastic) and could make us more creative thinkers. To me, this meant we were right on track, because it meant we as humans were designed to have fun AND solve creative problems, both of which were the bedrock of the culture we developed at Kablooe. Prior to learning this nugget of truth, I had spent a lot of time at conferences, lectures and seminars trying to convince left-brained engineers that they could be creative people. Some of them were excited with that challenge, while the majority were skeptical. It seemed many wanted to hang onto their left brained tendencies as a badge of honor. I wanted them to know that the creative parts of the process shouldn’t be left to the designers only, that the process was holistic, and if you participated in product development you should be participating in the creative work too. This is exactly what our professor taught us in college. I never had much luck with this argument however, because I was fighting two strong forces. First, the corporate society that many engineers lived in practiced pigeon-holing workers into a single task area, and the engineers were used to it. There is a certain amount of security that comes with the idea that you only have to be responsible for one thing and nothing more, and many engineers did not want to give up that security for the uncertainty of being responsible for something creative that cannot be defined. The second obstacle was the lack of evidence. Most people were familiar with Meyers-Briggs and other similar tests that told us what kind of personalities we had, and most people automatically linked the strong behavior of theirs to a stronger side of their brain. I would tell them that they have this thing called the corpus callosum, and it connected both halves of their brain together. Unless that was severed, they could use both halves. Even though this made sense to me, the argument was largely ineffective in convincing engineers who were used to evidence based decisions that one side of their brain was not dominant over the other. My breakthrough came in 2013 when a study done at the University of Utah showed that personality types had nothing to do with one side of your brain being stronger than the other. This gave me clinical evidence to back up my existing claims that anyone can have access to that right side, no matter what their personality is like, and be a creative problem solver. There is other evidence as well. Sir Ken Robinson gave a TED talk, the most viewed TED talk in history, that walked through a 20 year long study investigating the creative thinking abilities of a group of children who grew from age 5 to 25 during the study. Almost all of the five year olds were able to show creative thinking abilities. But as they aged through the educational system their creative thinking abilities eroded to nearly nothing at age 25. The salient point here was that they HAD those abilities at one time in their life. If they once had a strong functional right brain the argument that they can’t have one now disappears. That argument is then replaced with the question of how to get it back, and as we all know, nothing physically changes in our bodies without three major things: practice, practice and practice. If we look back in history we can easily find clues to support this thinking. At the roots of the Greek philosophies that founded our current western culture we see four major areas of philosophical thought by the likes of Socrates, Plato and Aristotle. They are Metaphysics, Epistemology, Axiology, and Logic. All of these were taught as equally important subjects in order to create a society of rational thinkers. On today’s campus, it would be out of place to think that the study of Axiology (beauty, art, etc.) is a part of becoming a rational thinking engineer, yet the founders of our culture thought it to be so. And perhaps they were on to something, knowing that the part of the brain that appreciates art and beauty is the same part responsible for creative problem solving. Socrates didn’t have access to the brain scans that we do now, yet through observation and study he learned this to be true.

Innovate The Way You Were Designed To is an eye-opening look into the world of design and innovation from the perspective of first understanding how our human cognitive powers work when it comes to creative thought. Filled with anecdotes from 30 years of past experience, this book gives concrete examples of experiences from the design and development world. Learning about the author’s path from art to medical device design puts a perspective around the basis for the book, and creates a strong connection between the intentional use of both sides of our brains and successful innovative outcomes in our design engineering innovation attempts. Utilizing our brain’s inherent ability to create by understanding how it operates is the key thesis to the practical, step by step, process laid out in the book. The process is broken down into practical phases that act as a simple framework for any development project, with safeguards, best practices, and tested methodologies that will set the readers up for successful innovation projects of their own. The encouragement from this book is to get out there and use your inherent abilities to innovate and contribute to making this world a better place in your own unique way.

Tom KraMer is the managing principal and a product design engineer at Kablooé Design, a Minneapolis MN based product design and innovation company. For over 30 years Mr. KraMer has been involved in research and development for many types of products , and after his first 18 years of product design and development work in the field spearheaded the formation of the D3 (Design Driven Development®) process, which Kablooé uses to help direct its customers through the development process in an innovative way. Tom has led Kablooé Design innovation projects for fortune 500 companies as well as small start-ups. Kablooé has in turn helped develop atrial fibrillation therapies, coronary intervention devices, drug delivery devices, prostate surgery devices, and many other unique and innovative medical and non-medical devices. Tom has been providing these product design and development services for product companies since 1990. He began to push Kablooe’s portfolio deeper into medical device design in 2000, and medical devices now represent over 70% of Kablooe’s project work. Tom has personally done hands-on design work, prototyping, innovation development, research, testing, and engineering-for-manufacture and has a personal passion for user-centric devices. He leads the charge for user-centered design, innovation, research, human factors and ergonomics at Kablooé and has personally directed usability research, focus groups, ethnographies, and human surgeries at the University of MN and hospitals in Minneapolis, Detroit, Pittsburgh and others. Mr. KraMer holds an Executive Certificate in the Master of Product Development at Northwestern University and a BFA in Industrial Design at MCAD. He also holds a certificate from Stanford University for Cardiovascular System in Health and Disease, and spends much of his professional time teaching and lecturing about the human centered D3® development process and innovation training at worldwide trade conferences, for training organizations, and for corporate teams and universities nationwide.