The Mountain Of Hope

The Adventures Of Snoop The Savant Goat 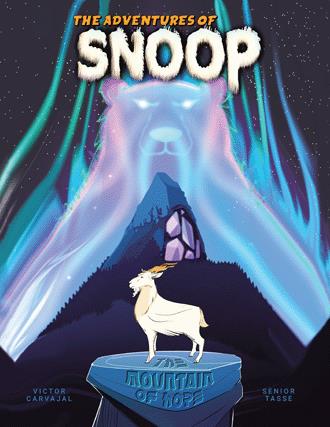 Snoop was a feral goat who thought his world was not even remotely close to being the best of all possible worlds. To him, waking up in the morning was like tossing a coin in the air with shrubs on the tails side and claws on the heads side. If the coin landed on shrubs, he would have a peaceful day, hardily trotting and browsing on watery willow-bark sap, tasty trailing vine leaves or prickly thistle flowers. If the coin landed on claws, he might just face a fatal encounter with a throat-craving, breath-snatching coyote, a wild pack of cynical, hobbyist killer dogs, or— the most invisible threat – a careening eagle. Snoop was a survivor. Since becoming a father, he’d worried less about himself, and more about his herd. They had suffered a precipitous decline in kid population recently. He was the past and the present. Kids were the future, and that future was not bright. He took a panoramic glance at his surroundings and focused his attention on the mountain of the primordial grass. His mind traveled back in time and revisited the story of the famous mountain of hope. A legend popular amongst goats had it that the courageous adventurer and ancestor of all caprine including sheep and goats, Ba Caprone, stepped into a bear's territory during a relentless winter storm in search for the primordial grass twelve thousand years ago. The primordial grass was believed to have been the first plant that grew out of the surface of the earth. It also was said that the primordial grass was the most nutrient-rich plant ever grazed by any ruminants, and could only grow on the forbidden mountain, a mountain protected from would-be grazers by a ferocious grizzly bear. No ruminants who had dared trespassing on the bear's mountain ever returned alive, and Ba Caprone knew that. His journey began when Ba Caprone noticed that every member of his herd who had sought the primordial grass and encountered the bear did so only in the summer, fall or spring but never during the winter. He wondered why.

With notable exceptions, Black Beauty immediately comes to mind, literature observes humanity through a human lens. The Adventures of Snoop the Savant Goat shifts the narrative angle and tells the story of technological prowess and emotional ambiguity from the perspective of an animal, a very curious and vengeful goat called Snoop. Snoop crosses the path of the thriving human species as he seeks a new home for his herd, a place full of promise and hope for all ruminants. The primordial grass, a mystical plant brimming with nutrients and life, grows on the ledge of a mountain – a place that can be reached only after an arduous and dangerous journey. To reach the mysterious plant, Snoop must avoid predators and outsmart unpredictable (and untrustworthy) human beings. Will he succeed?

A citizen of the world, Senior Tasse earned a master’s degree in Engineering from Ecole Catholique d’Arts et Métiers (ECAM) in Lyon, France, and an MBA from the University of Michigan. Sensitive to beauty in all its forms, he studied science and continues to observe human beings to understand their complexity. Growing up in Yaoundé, Cameroon, he called two places home: his parents’ house and the municipal library. Pre-pandemic, he spent his free time traveling throughout Europe, Africa, Asia, and America to meet and learn from people of other cultures. He hopes to resume his wanderings soon.