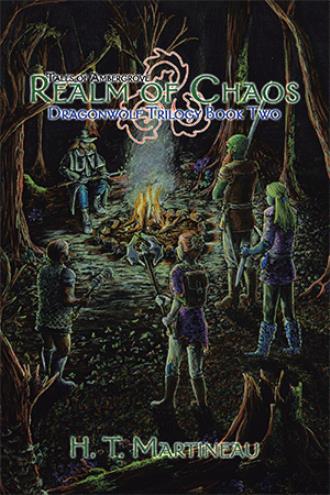 Mara pulled her rope, tightening a knot, and then lay a hand on the mast of their little raft. Their small sail was unfurled, Finn sat with his back against the mast looking through supplies, and Teddy and Kip stood on either side, working together with oars. Teddy explained that this would be the best transportation at the start, because they did not yet know what they would face when they made it to the forbidden lands, and although it would be bitter work to get the raft to their destination—they would be taking turns rowing in pairs—the current would bring them swiftly back toward their camp with little effort. They could still barely see Ashroot in the distance, standing on the beach watching them sail away. They could no longer see her, but Keena howled from the beach. They’d decided to leave her with Ashroot, at least while she was so young, so the bearkin had some company and so Keena wasn’t in danger—or put them in danger—when she was too young to know what to do. Mara could feel the burning in her eyes as she listened to her pup calling out to her. “We really need to call it something else,” Kip said suddenly, pulling Mara out of her daze. “What?” Teddy replied. “The forbidden lands. How are we going to feel positive going there with such a name? And, you know, it’s not forbidden to us really.” Kip shook his head and grunted as he swept his oar. They were silent for a moment before Mara offered, “Well, Aeun told me that it used to be called Lesser Earth. We could call it that.” Teddy laughed a great boom. “Well, that’s certainly not as scary as the forbidden lands, but how ridiculous!” The men all laughed for a moment. Mara smiled. Finn threw up a hand and pressed, “Okay then what should we call it?” Silence. “Well,” Mara began, “What would you call it, Kip? It was your idea.” “Me?” Kip asked, chuckling. “My people live in hills and every name has hill in it. You don’t want me giving it a name.” “That’s very true!” Finn agreed. “What would you call it, Mara?” Teddy asked, turning to look at her before making a great sweep with his oar. “Yeah, Mara,” Kip agreed. “You came from Earth. What would you call it?” Mara fiddled with the rope for a moment. What would she call it? In the year that she had been in Ambergrove, she had used her recollections from books and movies to relate what she’d seen to what she knew. However, as she had felt more a part of this new world, she’d thought back to Earth less and less. She stared out into the open water and made a face. “That difficult, is it?” Finn asked. “Well, I …” She paused, and then it came to her. “I think we should call it Chaosland,” she said, smiling to herself. It sounded like a theme park, but none of them would know what that meant if she told them. “Hmm … Chaosland,” Teddy mused. “Why?” “Well, most old countries on Earth have ‘land’ after their name. Scotland is the land of the Scots, England is the land of the English, and Chaosland is the land of chaos.” “Interesting. Though, here, we would probably say ‘realm’ instead of ‘land,’” Teddy replied. “I think it’s better that way,” Finn interjected. “According to Mara, we’re fighting darkness from Earth, so it’s only right to give it a name that they would give it.” “I agree,” Kip said. “Alrighty then. It appears I’ve been outvoted. Chaosland it is.” Teddy made another large sweep with his oar, and he and Kip pushed them slowly forward toward their dark destination. 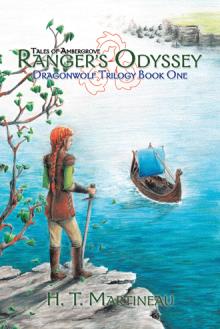 After earning the loyalty of three companions—a forest dwarf named Teddy, a gnome named Kip, and a sea elf named Finn—and the dear friendship of a bearkin named Ashroot, young Mara believed her trials were over. Now with a real dragonwolf in tow, she must sail to the forbidden lands to face the harbingers of chaos and prevent their leader from spreading its poison through all Ambergrove. The forbidden lands were forbidden for a reason, and it will take all their strength to withstand the pull of chaos and the temptations of Earth’s conveniences. Darkness and doom hang over them as they trek through the forbidden lands, facing gunslinger goblins, the perils of doomed cities, and their deepest fears before ultimately confronting an evil that brings Mara to her knees. All too soon, she will have to face the loss of her uncle, a dear friend, or someone who could be more—all while fighting her past and working to save Ambergrove’s future. Within the realm of chaos, darkness has the advantage, and for the Dragonwolf of Aeunna, the losses may be more than she can bear.

H. T. Martineau grew up reading fantasy and adventures, playing various role-playing games, and going to festivals with her family. When she was sixteen, she created the world of Ambergrove on a park bench in Scotland. She now adventures with her husband, who encourages her to share the tales of Ambergrove.