Revenge is Perennial: The Alliance of the Unknown 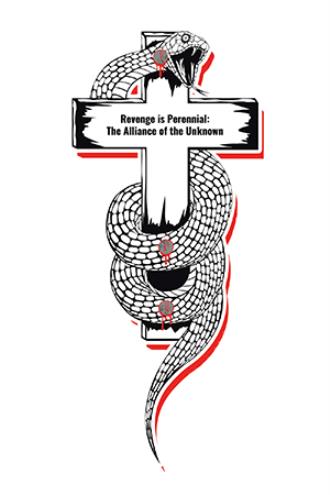 The Devil’s Fog Days after the expedition, fifty thousand flamingos retaliated from the lake, north of Kimberley, destroying many searchlights on top of the blockhouses. Their appearance turned the sky pink. For days now, Morris could only hear the sound of mortars blasting away into the unknown. After some time, the third alarm sounded. Morris knew what that meant – it was a sound he had hoped to never hear again and one his uncle knew all too well. He followed his Captain of the Town Guards into the entrenchment which was now protected with iron grids. Luc and Jeff, his comrades, didn't show up. He could see smoke, flashes and smelled the stench of death. The earth in front of him had been churned up. Morris dragged his boots forwards through the muddy grounds. Did he see a rat? No, no time to think. He was given a rifle with a bayonet; it was heavy and he didn’t like the kickback. He heard different animals roar. He looked above him and saw a few observation balloons. The balloons communicated using lights with the centre of the town. Once in a while, fireworks were being fired in the distance. The searchlights would have been handy to see through the sparkling fog. After a long silence, he heard the roaring of a lion, then a shuffle of a herd. Someone from the nearest balloon shouted, ‘They are coming!’ A giant explosion took place five hundred yards away. One of the hydrogen observation balloons had exploded. For a brief second, Morris saw the entire battlefield. He saw the barbed wires, craters filled with water covered with piles of rotting bontebok, springbok and snakes. A single tree without any branches or greenery stood a silent witness. Suddenly, a wave of flamingos attacked the soldiers in the balloons. One by one, the balloons fell to the ground, the men on the ground stood helpless. Morris saw the flamingos piercing a man’s back in front of his eyes. He was screaming before a soldier had given the command to put him down. The herd came closing in, more fireworks were fired and Morris could see a wave of wildebeest. The blockhouse machine guns opened fire, the Captain commanded it and a salvo followed. Morris pretended to aim but refused to fire. It was one thing to shoot at cans, but shooting at living creatures? It didn’t feel right, and he felt vulnerable. He peered next to him and saw a black soldier handling the Lee Enfield Rifle Mk III like he handled a pen. Silence followed, and only fifteen minutes later, a second wave of Cape buffalos came charging.

Centuries ago, global crimes against wildlife were taken to another level as Zoologism became the dominant religion in Great-Britain. Zoologism created a fighting branch, called The Defenders, to eliminate any creature that could pose a threat to mankind. After the Second Boer War of 1902, Great-Britain took control of South-Africa. Years later, Edward, a veteran of the war, decides it’s time he dealt with his personal trauma of the war. He takes with him his nephew, Morris, who struggles with his future. Searching for answers, they realise that their neatly planned agenda is thrown out. Years of mass slaughtering wildlife have led to an unprecedented animal uprising which shakes modern civilization. As The Defenders are trying to take a stance against the remorseless waves of animal attack, Morris and Edward have to decide between family and personal interest.

At the age of seven he wanted to become an archeologist. As a child he wanted to grow up as a secret agent. His teenage dream was to join the army. As a young adult he wanted to be a judge. Reaching manhood he dreamed of becoming rich trading stocks. And as a writer he can become them all. Thanks to his passion for history and the interest in the fantasy/horror genre which stood firm in an increasingly chaotic world. At the age of 32 connecting with the world in his residence in Belgium, this young storyteller will be able to finish the series of Revenge Is Perennial. And if that’s not enough he has multiple other stories he would like to share with you.