6 Remarkable Women Who Passed The Tests of Life

Women from the Bible who refused to be distracted. They considered their options, made decisions & arrived at their God-prepared Destination. 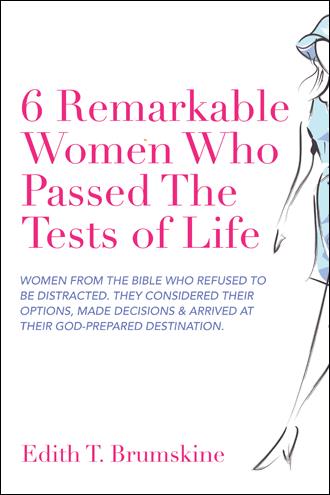 Introduction The Bible records that God created man in His image and likeness. "He created him male and female. " The first man was called Adam; he was God's masterpiece. Then God created the woman. Prior to creating her, God put Adam into a deep sleep, performed a divine surgery, and took a rib from within him. The rib that was taken from Adam was used to construct the woman while Adam was still asleep (Genesis 2:20-22). The first woman was named Eve. She was meticulously created and fashioned as a unique being! Because of the nature of her makeup, she was formed in private—no eyewitness, no noise, no distractions. According to the biblical text, Adam needed a companion; hence, God created the woman to be a helper and a companion to Adam (Genesis 2:17-22). The woman was built with strength and purpose. Moreover, God put something unique within her—a womb. A womb is both a physical and spiritual location; it is a place of conception, communication, nurture, and growth. The woman is God's masterpiece. She is dearly beloved by her creator. During her creation, God put Adam into a deep sleep. Therefore, no one truly knows and understands the woman better than God. After Eve was created, she spent time alone with God. Therefore, we can conclude that her first relationship was with God. He was the first person she saw, the first voice she heard, the first person she spoke with, and the first person she trusted and willingly followed. Afterward, God took Eve to meet Adam. She was introduced to Adam and given to him as his helper and wife (Genesis 2:22). God formed and equipped her to be a helper to Adam, who was appointed as the manager and supervisor of God’s creation. The woman is trustworthy. She is also beautiful, strong, intelligent, and perceptive. She listens, analyzes, and offers solutions. Moreover, she is an educator! ________________________________ The word exam is defined as the act or process of testing pupils, candidates, etc., as by questions. There are different kinds of exams; an exam is a normal part of life, especially in academic institutions. An exam usually requires preparation. A person must read, study, think, observe, analyze, and make informed decisions. An exam is administered to determine one's skills or knowledge. Usually, after an exam, performance is evaluated, which could result in a promotion, awards, recommendations, demotion, disqualification, etc. The idea of administering exams was originally God's idea. It did not originate from humans. In His sovereignty, God uses His unique method of testing to reward His children during and after their lifetime. Every child of God is enrolled in His “higher learning institution,” and He administers exams at His discretion during one's lifetime. Moreover, He administers exams at His discretion on the road of life. God's exams and results are crucial to one’s life and eternal destination. He prepares the questions, and He chooses the location and duration of the exam. His grading system and exam results are determined according to His divine method. Oftentimes, God administers exams during the changing seasons of life. As God’s children and students in His learning institution, we take tests, quizzes, and exams. After successfully completing our course of study (which includes tests and quizzes), we then become teachers who can help and instruct other students to live successful lives. The exam result is crucial to receiving God’s best. Therefore, one must be attentive throughout the journey of life. Because a woman is a helper who is intelligent, perceptive, trustworthy, and brilliant, she is a lifetime student at this learning institute. Moreover, as a woman journeys through life, God administers exams to ensure that she is equipped, strong, alert, and ready for her God-ordained assignment. -------------------------------------------------------- This book is about six extraordinary women and their life stories, tests, results, and rewards. The women answered some important questions. They considered their options and chose answers that allowed them to fulfill their purpose, and experience God's best! We can thereby learn some valuable lessons from them and apply the lessons to our lives. This book is a call to women who want to score A+, move past the obstacles and offenses of life, and fulfill their purpose. Please turn the page, and let's look at six remarkable women who scored A+ on their life exams, and automatically became teachers!

6 Remarkable Women Who Passed The Tests of Life! This book is about select biblical women who refused to be stopped or distracted by the events of life. Despite the circumstances and challenges, the women arose to the occasion, clothed themselves with confidence, faith, hope, etc., and made decisions that allowed them to fulfilled their God-ordained purpose. This book is a call to women who are deternined to walk through the obstacles of life and arrive at their God-prepared place. As a woman you were meticulously formed by God; He furnished you with inner treasures that make you unique. Within the pages of this book, you will obtain answers, encouragement, instructions, and a desire to become the best you! (A glimpse of the inside content) She heard that He was invited to a dinner party in her neighborhood, so she decided it was time to meet the Man who had captured her heart with His words. She wanted to see Him, experience His presence, express her gratitude, and deliver a gift to Him. Therefore, she made plans to attend the dinner party uninvited! She got ready, took her confidence, dignity, and her oil, and headed to Simon's house.

Edith T. Brumskine, M. A. is a Bible teacher & Inspirational speaker. She is also a Certified Christian Life Coach. She is the founder of Closet Teaching Ministry. Edith is a gifted teacher/speaker who brings the pages of the Bible alive through her uncommon presentation of biblical truths. She is blessed with an amazing ability to apply scriptural truth to practical living. She has written curriculum, bible study lessons, devotionals, e-books, and commentaries. She has also released more than one hundred concise audio recordings on relevant biblical topics. Edith is a mother of two young adults. She lives in Northern Virginia.