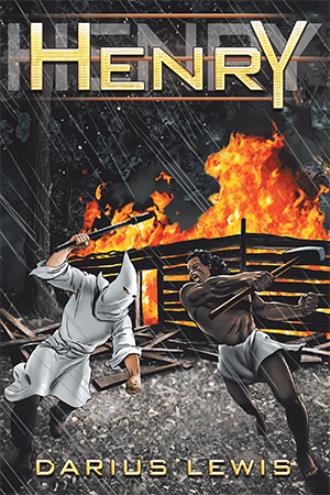 Henry gets to the door and stops. He looks down at a sledgehammer that’s sitting by the door. He grabs it and as he does lightning flashes in the background and the thunder rolls throughout the night sky. Rain begins to pour down. He stands there for a moment looking at the ground. His hair covers his face. Henry’s grip tightens around the hammer. He holds his head up and pulls the hair from over his face. His hair is long and black. He's skin is pale, like the horse and his eyes are black. His torso is bare, but his lower half is clothed with an all-black skirt and black boots. His name is Lucifer. Henry walks down the steps on to the ground. He doesn't say a word. Lucifer smiles at Henry. With a beautiful voice he speaks and out of his mouth comes "Do you know who I am?" Henry just stares at him sternly. He says nothing. All of a sudden, the lightning cracks so loud and with such a force it sounds like it could split the sky in two. It shakes Henrys home. Aryus screams. Anna clutches her child tightly. She can only watch from the inside. Lucifer speaks and says, "I know who you are…Henry." Henry still doesn't say anything. The smile disappears from Lucifer's face. He says, "Take him." A man with a white bag over his head comes out of nowhere charging at Henry. It's a member of the KKK. Henry quickly turns to his right and plants the hammer into the chest of the Klansmen sending him to the ground. Another one comes charging from behind Henry out of the woods. Henry turns around and uppercuts him with the hammer. Two more come charging out of the woods at Henry from behind Lucifer. Henry takes his hammer and launches it at one of the men. It hits one of them in the chest taking him down to the ground. The other one proceeds towards Henry. He takes off running at the Klansmen. When they meet Henry picks him up and slams him to the ground with force. He then takes up his hammer and swings it with power into the lying Klansmen. Then out of nowhere Henry gets hit in the face with a metal bar. He doesn't go down though. He gets struck by the metal bar wielding Klansmen again but still doesn't go down. He swings the bar again but this time it's blocked. Henry looks at the Klansmen with rage in his eyes. He breaks the metal bar in two with his sledgehammer. He then delivers a forceful blow to the stomach of the Klansmen. He just falls face first onto the ground. Henry turns and looks at Lucifer. Lucifer has this plane look on his face. He opens his mouth and out of it fly's swarm into the night sky. They then descend upon the earth in the form of two evil spirits. These are the spirits of evil men. The spirits of men who make the earth cry out to God for help and to relieve it of all its pain and suffering. The spirits of men who bleed the blood of the innocent. Who burns, rips, tears, and eats the flesh of those who are unlike them. The spirits of men who are filled with the souls of the sorrowful. They stand breathing out nothing but lies, war, and hatred. They just stand there with their rotten flesh ridden bodies. Plaguing the earth that they stand on. Faces covered with black masks. Wearing garment's similar to Lucifer. All of a sudden one of the spirits has Henry by the neck. He drops the hammer. It lifts him up in the air with one hand. He opens the door slowly. Once open the whispers stop. Henry steps outside on to his porch. He goes no further. There is a man standing in front of his home and behind him stands a pale horse.

Henry is a simple man who loves his wife Anna and his son Aryus. They just want to live a peaceful life but all that changes though when unexpected guests arrive at their doorstep one night. On that night Henry and his wife begin to hear whispers. They grow louder and louder until Henry with his hammer in hand steps outside. Standing in front of Henry is a man with a pale horse.

His name is Lucifer. He gives an order for Henry to be taken down and a man with a white bag over his head comes out of nowhere and tries to take Henry out. It’s a member of the Ku Klux Klan. Henry tries to fight off the Klan but is eventually overwhelmed and his family is killed. Henry is then chosen to stop the Klan and their leader Apophis from destroying the world and remaking it in his image.

Along the way Henry gets some help from a woman know as Harriet. They clash against the Klan, and they even have to fight their own people along the way to accomplish their ultimate goal. But when it is all said and done Henry along with Harriet and those that joined them no matter their skin color come together and show unity and love. And with that power they finally topple Apophis and his army to bring peace to the world.

Darius Lewis is a 26-year-old college student who is majoring in Creative Writing and English with Screenwriting. He was born on April 11, 1994 in Florence, South Carolina and originates from Georgetown South Carolina but now reside in Montgomery AL. He started writing at the age of nine and hasn’t looked back. He continues to hone his craft as it is his passion. Therefore, seeking to become better at it every day.

He often uses his real-life experiences in his writing good or bad. He does this often to make his stories more relatable. To let people, know that they are not alone because others may be going through something similar. And that’s what Mr. Lewis brings to the genre of fiction. He combines fiction with his real-life experiences and what he sees going on around him to reach out to people and connect with them.

He uses the genre of fiction to think outside the box to deliver a compelling story to capture the reader’s attention.