The Culture of Education and Experiential Polemics 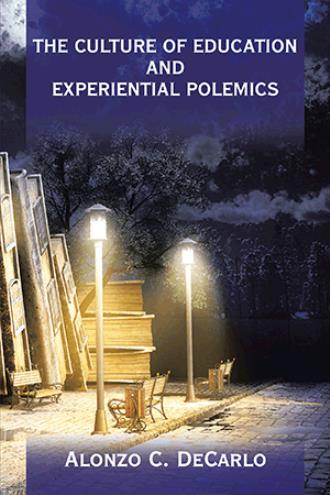 A private conversation about the culture of education related to Black Americans always yields poignant and sometimes painful truths. As the reader of this text, you are on the receiving end of a personal dialogue based on experiential polemics unrestrained by the politics of academic marketing. In this treatise of thought on the intersectionality of education, society, and Black Americans, Alonzo DeCarlo engages the reader with textbook flair in some places and subtle diatribes in others about a philosophy of Being Black in the United States while pursuing educational mainstays. In a world where the legal and constitutional support promises so much yet delivers so little, this book is in part a research text that specifically puts Black American education at front and center. It polemically discusses the academic enterprise in the United States. It offers novel insights for all parties involved in the educational ecosystem, which continues to disfavor Black Americans and others in the general population. The book can be thought of as a flowchart that connects factors, which contribute to underachievement in many educational domains and over-representation in institutions that wittingly or unwittingly stifle Black American’s socioeconomic mobility. It explores within-group and between-group differences on an array of issues that affect Black Americans’ educational state and well-being. A discussion on topics as diverse as psychiatry, sexual orientation, religion, culture, social justice, neuroscience, identity, psychology, and technology is undertaken, as they correlate with Black Americans traversing the academic enterprise from preschool through pre-med. This is admittedly as intriguing as it is ambitious. It is what distinguishes the text from others surrounding it on the bookseller’s shelves. In sum, this book is a result of thoughts and ideas compiled from observations on the connectedness of many areas related to and affected by the education of Black Americans.

Alonzo C. DeCarlo is a leading and provocative organic intellectual. Over the last two decades, he has been a scholar-practitioner. His pioneering work and writing on group psychotherapy with urban adolescents was groundbreaking for clinical practitioners. While becoming a tenured associate professor of psychology, he was also a mental health and juvenile justice expert and capital punishment mitigating specialist. He has been a Fulbright scholar, associate provost and vice-chancellor of academic affairs, social and behavioral sciences chair, and a graduate professor of psychology and social work. Dr. DeCarlo earned a B.A. in Psychology and MSW in Clinical Social Work from Wayne State University in Detroit, Michigan. He holds an M.A. in Experimental Psychology and a Ph.D. in Developmental Psychology from The University of Toledo. Dr. DeCarlo has taught doctoral seminars in East and West African Universities. Before joining the ranks of academe, he was on a career path with extensive experience in law enforcement. He is currently a psychology professor at Lincoln Land Community College in Springfield, Illinois.