Greeting and Honoring Each Season As It Comes 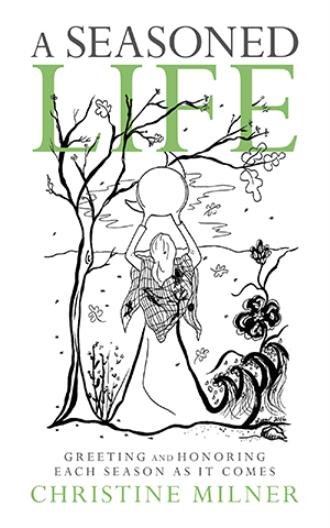 I can say that I have known many rich and wonderful, and quite a few chaotic and painful seasons, and that it took many decades to learn the lessons from both kinds. I’m still learning. I write this book for my daughters, my grandchildren, and anyone with the same yearning to be closer to the One who “set the boundaries” of the four seasons’ regions for one reason only, so we could savor each one. The Masai have in their catechism the question, “Why did God create the earth?” The answer is poignant: “Because he thought we might enjoy it!” Preview of the four chapters: Summer: SUMMER: A See-Saw Invitation Gladys Taber, another mentor of mine for navigating the seasons, once wrote, “As long as you have a window, life is exciting.” I had to decide which season I would begin with in this glimpse at all four, and I landed on summer because it’s the one during which I’m always at my window looking out to make sure it’s still here. It’s a season, here in New England especially that has a timing all its own never beginning at the same time each year. Autumn: AUTUMN: Nothing Lasts Forever I’m not a goodbye girl!! The day I surrender to saying goodbye to summer, behold I come face to face with a season whose other name is weighed down with more surrender, letting go and impermanence: FALL!! All around us depending on where you live there may very well be an explosion of fiery oranges and golds, but those leaves are also falling away one by one. Listen to what some of my mentors have to say about this season: Winter: WINTER: The Soul Work of Settling If you live as I do in a northern clime, you will most likely come across two vastly different kinds of people when it comes to the winter season: some hate the thought of it and many of these head south to escape it. Others welcome winter with open arms either because they understand its necessity and the gifts it brings, or are motivated by their love of skiing, or skating or snowshoeing! There may very well be folks in between these two poles somewhere as well. Winter for me takes getting used to, but once I’ve accepted it and greeted it properly, I settle in for “my long winter’s nap.” Settling is an appropriate activity for this season of cold, seeming barrenness, and darkness. It is THE season where if I do the “work” it calls me to, I will be able to grow, arms and heart wide open, to receive the seasons to come. Spring: SPRING: Wild and Free Spring is that season we yearn for that takes its sweet time arriving, but when it does it is unmistakable. The thing about Spring is it awakens in some of us this urgency to clean up, rake, fertilize, plant, and feverishly go about getting “spring chores” done. It is a good urgency as it gets us outside and paying attention! But that urgency can also rob us of things we will not see or hear or sense because we are in a frenzy to get things done!

I have written on the importance of greeting and honoring each season in order to deepen one’s spirituality. It took me years of wanting to do this earnestly myself, to be able to understand what a diff erence it makes between existing and living a full life in tune with the God of all seasons. I try to reach out to all those who, like me, would love to have more time to appreciate the subtle changes each season brings and thereby “pay attention” to divine messages contained therein. What I discovered is what I want to share: It is a relatively simple transition to go from the blurry passage of time to slowing down just long enough to be a Noticer! I especially want to share this discovery with those of the younger generation of adults who it seems to me are so hungry for meaning and purpose. In the book, which I tentatively entitled, “A Seasoned Life,” I try to describe the gift of each season, what to notice, and how to greet it, honor it, “keep” it, and how learning to do that enriches our lives. Each chapter ends with a few poems and songs that celebrate it, decorating ideas that help greet that season, and recipes that have been longtime favorites I look forward to each time that season rolls around. Becoming a grandmother was an opportunity to pass on to my two grandsons and three granddaughters the many simple and delightful ways I slow down long enough to enjoy each approaching and lasting season. Th is book is an opportunity to expand the number of people I could gift with these practices beyond my children, grandchildren, and former students, retreat participants and spiritual directees. My hope is that younger readers of the book might discover the richness of what I propose long before the age I was when I finally understood its wisdom!

Christine Milner works and lives in Southbridge, MA. She has been working on writing this book at the urging of many who have participated in workshops and retreats she has given on the topic of Spirituality and the four seasons. She earned a BA in English form Annhurst College, Woodstock, CT, an MA in Religious Studies from Assumption College, Worcester, MA, and a Graduate Certificate in Spirituality from Hartford Seminary, Hartford, CT. She taught English, History, French and Religion for over 20 years in Grades 4 through 12, and courses at Anna Maria College, Paxton, MA, to graduate students in Religious Education. She also served as a Faith Formation Director in a parish for 12 years. In retirement, she remains engaged in retreat work and as a member of the USA Leadership Team of the lay associates of the Sisters of the Assumption, a congregation in which she served as a vowed religious for 7 years and a lay associate for 33 years. She most recently became a Spiritual Director deepening her background by participating in a Supervision group at Holy Cross College, Worcester, MA.