Will our democracy survive?

by Donald A. Collins 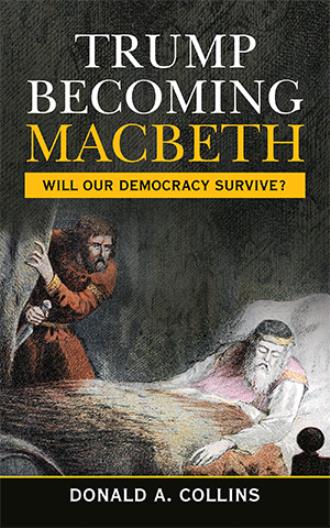 Remember the famous Shakespeare play Macbeth in which the returning hero of war murders the king in order to become king and sets forth a series of events that lead him finally to understand what his humongous behavior has bought him when, at the suicide of his only truly close ally, his wife, he says: “Life’s but a walking shadow, a poor player, / That struts and frets his hour upon the stage, / And then is heard no more. It is a tale / Told by an idiot, full of sound and fury, / Signifying nothing.” Donald J. Trump I imagine will likely never get there. He will never apologize. But in trying to murder our fragile democracy using hate, lying and his inherited wealth to take whatever route to power he could use, this disgraced former president is now faced as Macbeth was with an army of outraged citizens of both parties who are coming to displace him forever from political power and quite possibly put him in jail. Does he even have as Macbeth did any close ally? Those elected officials who cluster about him in his coming precipitous fall must surely know their racist driven, power seeking fealty can’t survive the morality test to which the majority of Americans will hold them! Our democracy, despite the darkness of the political present, will survive and as we overcome the racism of 400 years of slavery, America will continue to show the world the vast benefits of our system of law and order even as we understand the heinous flaw of slavery which has always infected many world human populations since their inception! We in time surprisingly may look back and thank Trump for exposing the worst in us so we could move on to fulfill the best in ourselves!

This book is a compilation of the best articles out of many published on the Church and State website written about Donald Trump from late August 2020 the first time when author Collins recommended that readers vote for Joe Biden for President of the United States. Collins has a no holds barred perspective of close to four generations of progress in America. He has travelled the world extensively and seen the best and worst of humanity in many forms. He understands that the most likely scenario for failure of the American democratic system is for a dictator to emerge and seize power away from the people. He recommends, like many before him, that the United States should set an example by giving it’s people and all of the people in the world free contraceptives to empower women and reduce our human population painlessly from its nearly 8 billion today to 2 billion by 2100.