A PILOT'S WAR IN THE MEKONG DELTA 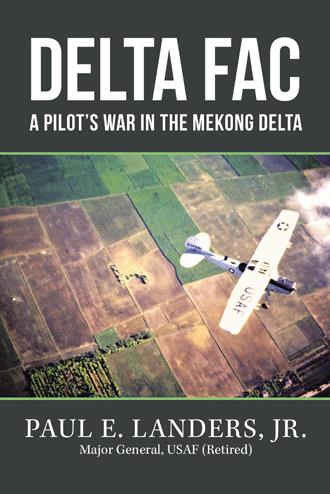 17 February 1968. Mekong Delta, South Vietnam. One thousand feet above the rice paddies. The sun glints off the spinning propeller in front of me as I turn to fly over a canal where the water has become suspiciously muddy. Then, over the wind and engine noise, I can hear the pop.pop.pop of automatic weapons through the open windows of the little Cessna 0-1. I add full power and make an abrupt turn to go diagonally away from the sound, giving the gunners a constantly changing range and lead angle. I long ago decided that this is the best chance I have to complicate their firing solutions, and thus far it has worked. At 90 miles per hour, in this small single-engine plane, I need all the advantages I can get. I will move outside the range of their AKs, climb another few hundred feet, and try to stay far enough away to be a less tempting target. Still, I check my flak vest, tighten the chin strap on my helmet, and wipe the sweat from my eyes. I am a US Air Force pilot, callsign: Tamale Zero Three, attached to the army as a forward air controller (FAC). I have been flying over this portion of the Mekong Delta for the last two hours, providing air cover for a “search and destroy” operation by units of the US Army's 9th Infantry Division. The 9th is the only large US unit in the Delta. We have been systematically driving the VC out of the villages they occupied during the Tet offensive, and attempting to outmaneuver and destroy them in the trees and rice paddies of the Delta. My job is to fly visual reconnaissance over the area of operations and to direct air strikes and artillery fire as needed. I have moved away from the most recent contact with the VC, hoping to spot them retreating from our forces. Higher now, I turn back toward the enemy and begin my juggling of radio frequencies. I have three separate radios to communicate with my operations center, the ground forces, and the fighters, and I am the only one who can talk to all three. I can only talk and listen on one radio at a time. I reach over my shoulder and flip the radio control to VHF. I confirm with my operations center that there is still a flight of fighters scheduled to arrive in about five minutes, then switch to FM and notify the ground commander that I have located an enemy force, giving him the eight-digit coordinates of their location. He agrees to use the fighters on that target and confirms that there is no artillery fire scheduled in that area that would complicate our execution of the air strike. I switch now to UHF in time to hear the fighters check in. "Tamale 03, this is Bobcat 41. Over." I reply, "Bobcat, this is Tamale 03. Go ahead." "Bobcat 41 is a flight of two F-100s; we’re about 10 miles north of Can Tho. We are carrying snake eyes and nape." As I write the information in grease pencil on the right window, I think to myself that the load is good for our target. Snake Eyes are 500-pound bombs that have large metal fins which spring out when the bomb is dropped. The fins act like speed brakes, slowing the bomb’s fall and delaying its impact and detonation. Because of the fins, the fighters can press closer to the target before dropping, and are therefore more accurate. “Nape” is napalm, jellied gasoline that explodes in a massive orange-yellow fireball, burning everything it touches. It reportedly can suffocate people nearby as it consumes all the oxygen around. Napalm is the weapon most feared by the Viet Cong.

His duty was to conduct reconnaissance and direct airstrikes in support of the only large US unit operating there: the Mobile Riverine Force (MRF). The MRF, combining 2d Brigade, 9th Infantry Division and Navy Task Force 117, fought along the many rivers and canals of the Delta, seeking to regain control of that quarter of Vietnam, where over half the population lived.

After Tet 1968, when the MRF had driven the VC out of the major Delta cities, General Westmoreland praised the MRF, saying that “they saved the Delta.” Paul Landers was there. He flew more than 375 combat missions, directed hundreds of airstrikes, and helped rescue downed aircrew and save outposts under attack.

This is his story.

Major General Paul Landers graduated from the Air Force Academy in 1962, with the fourth class ever to attend the school.
He served 31 years in uniform, flying as a jet instructor in the US and in Canada, as a transport pilot, and as a forward air controller in Vietnam, where he flew more than 375 combat missions.

He was commander of the transport wing at Charleston AFB SC during Operation Urgent Fury in Grenada; he flew two missions taking in soldiers and supplies and returning evacuees.

He was commander of 21st Air Force at McGuire AFB NJ during the first Gulf war, and was responsible for command, control and support of the airlift in Desert Shield.
After retiring from the Air Force, he worked in Michigan for large companies in Ada and Dearborn.

He and his wife currently live in east Texas.