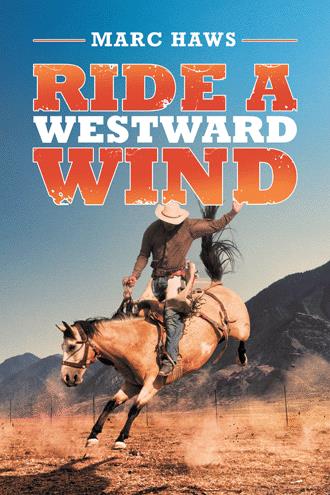 The lantern was a footlight on a stage. It cast my shadow far, and big. I walked toward the water trough at the farthest reach of Cook's lantern. His saw never stopped ripping at the plank. The moaning of his ripsaw sounded like ghost voices in a slot canyon. As I approached the trough, the dark form of another cowboy hurried to get there before me. In the feeble light, I recognized this hombre. He was the towhead, the young cowboy, Miles G., who didn't shave because he was trying to grow his fuzzy sideburns into an outlaw beard, a kid fully my size, and maybe a bit older. I loathed how he was always vying for someone's approval. I knew his type. The kind that likes to stand beside whoever he thinks has more stature, and measure himself in sidelong glances. Miles G. now stood in front of me, confident in his self-regard as a scrapper. His head was tilted back, his chin thrust out. He was supported by the cowboys, and he was my better. The approval of the dark pack that was all around the yard, and drawing in closer, made him daring and smug. Miles G. stood with his arms crossed authoritatively over his chest. He would bar my path to the horse trough. It was the smirk on his face that lit my fuse. I am too slow to anger. It's one of my flaws. I admit it. But at that moment, my blood--already hot--boiled over with rage. It was an inner explosion that destroyed all self-control, all rational thought. My "give-a-damn" broke. With animal aggression, I suddenly lunged at him. I threw myself at him, with all my force. My shoulder hit his chest. Violently. Miles G. fell backward, over the water trough. He landed hard, on his back and shoulders, the breath knocked out of him. I hadn't planned for the horse trough to chop his knees out from under him, but it worked out to my advantage. And he had chosen the place for confrontation, himself. So, it was his own fault that he got chopped.

This is a fun-read western, but it is not pulp fiction. It’s a classic human conflict in a western setting, with serious philosophical issues. Think of “The Ox-Bow Incident,” the classic novel by Walter Van Tilburg Clark, but as readable as a Louis L’Amour western. A young man finds himself an outsider among the rough hands of a western ranch in Idaho during the Great Depression. An impassable rift between the kid and the cowboys happens on a scorching hot day in August, when men’s tempers are boiling. The kid’s working partner that day is violently killed when he impulsively and violently confronts a vagrant believed to be trespassing across the ranch. Critical events during the seconds leading to the cowboy’s violent death are not clear. Unable to save his friend, the kid rides for help and a posse forms. The kid believes the cowboy’s provocation led to his own death. But the ranch hands in the posse are convinced the tramp caused the death, so they insist on hanging him. Serious issues beset the kid and the ranch during the three difficult days after the death. The personal conflicts will be man-making for the young cowboy. The question is whether the posse will reflect and deal with its conflicts in a civilized way.

Marc Haws is an Idaho rancher, with a unique background. As a young man, he earned a doctoral degree in modern language and literature from a major university, then earned his law degree from another major university. He had a courtroom career of more than forty years as a prosecutor at the state and federal levels, while he has also taught as an adjunct professor at various colleges. Family, horses, writing, and argument are his passions. He has also raised seven kids. These unusual credentials uniquely qualify him to write about the conflicts of a young man growing into manhood on a ranch, and the legal and moral conflicts of a rough posse of cowboys wanting to hang a man.