Dancing with My Feet 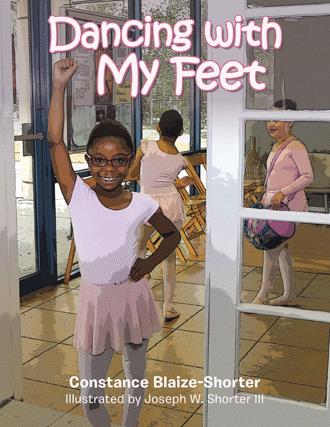 From Artistic Director and Playwright, Constance Blaize-Shorter is a story about a 7 year old girl , LA, who is excited about her very first ballet class! She loves to dance and wants to show her teacher, Ms. Ana, what she can do. LA is spunky and a bit overzealous at times, which eventually causes her to create situations that are both comical and a bit embarrassing. Through the loving guidance of her teacher, Ms. Ana , LA becomes more confidant in her abilities and declares that ballet is now at the top of the list with her favorite thing in the world. Candy! Dancing With My Feet teaches step-by-step professional ballet technique from first to fifth position feet as they reader embarks on a fun journey with LA and her new dance friends. Beautiful Photography Art by Artist, Joseph W. Shorter III, newcomer to children's book illustration, captures images of young dancers that are globally relatable. Awesome book to read at themed dance parties and to prepare first time dancers for class.

LA is an energetic 7-year-old who’s finally taking her first ballet class. She loves to dance and wants to show her teacher what she can do. She is fearless and a bit nervous. This mixture causes her to get into situations that are quite comical!

If LA makes a mistake, her teacher encourages her to try again, and her classmates always cheer when she gets the technique right. Building bonds with her new friends, she becomes more confident in her dance skills. LA is excited that she has tried something new and loves dance even more. She declares that ballet is now at the top of her list with her favorite thing in the world. Candy!

Dancing with My Feet explains basic ballet techniques to junior dancers. It is the perfect way to learn first through fifth position feet while embarking on fun adventures with LA and her friends. This story is great for bedtime, themed dance parties, and fun class instruction.

Constance Blaize-Shorter was born to dance. At age five, in the family room of their Brooklyn, NY home, is where she performed religiously - with or without an audience. After relocating to Florida, she began her formal dance training at age 14 in ballet, jazz, acrobatics, and modern. In 2006, Constance opened Blaize Dance, Inc. The school became the birthplace of several projects such as theatrical dance productions, ensembles, a girls’ ballet club, and much more. Passionate about investing in the community, the company has taken part in numerous charitable events and had the pleasure of performing in the Super Bowl XXXV Halftime Show. A highlight of Blaize Dance was an invitation to the dance group, Blaize International Dance Ensemble (B.I.D.E), to participate in Antigua’s renaming ceremony of a monument after President Barack Obama. At this event, B.I.D.E performed for celebrities and dignitaries such as Academy Award Actress, Angela Bassett, Actress Marianne Jean-Baptiste (CBS Drama- Without a Trace), and Antigua and Barbuda’s Prime Minister, Baldwin Spencer. This playwright continues to mentor budding dancers via Butterfly Ballerinas Club™. Becoming an author of children’s dance books is another way for her to inspire dancers to reach for their dreams while being prepared, poised, and postured.

Joseph W. Shorter III was born in Phoenix, AZ but grew up in Atlanta, GA. He is a Mixed Media Artist and Author in his own right with a background Graphic Design. As the illustrator of Dancing with My Feet, Joseph used his artistic eye to capture the unique features of the characters through photo art. He is also the husband of Author, Constance Blaize-Shorter.