The Mystery of the Gospel

"Christ in you, the hope of Glory" 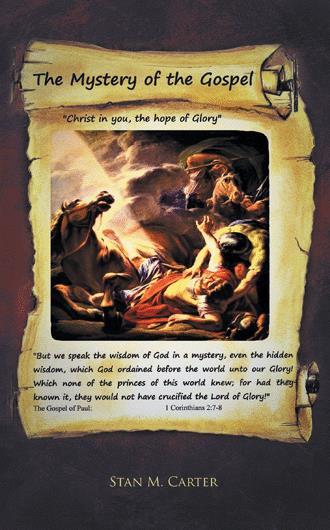 Chapter 1 The Stoning of Stephen
After Pentecost, the leaders of the Hebrew synagogues secured false witnesses in their plot to stone Stephen. They accused him of blasphemous words against Moses, against God, and against their temple: "For we have heard him say, that this Jesus of Nazareth shall destroy this place, and shall change the customs which Moses delivered us." Little did they know, their accusations echoed prophetic words spoken centuries before, words that would reveal the perfect will of God from the foundation of the world.

Among the shadows that day, stood a man named Saul. Skilled in the Law of Moses and sacrifices from his youth, he held a rage-filled hatred for those of the way, like Stephen. As Saul listened intently to every word spoken, perhaps he was surprised when, rather than deny the charges placed before him, Stephen began his own history lesson of the scriptures from Abraham to Solomon.

Then, full of the Holy Ghost, Stephen began to reveal the "Mystery of the Gospel" by echoing the words of Isaiah and the Prophets when he declared:

"But Solomon built him a house? Howbeit, the most high dwells not in temples made with hands! As says the prophet: 'Heaven is my throne and earth is my footstool. What house will ye build me, saith the Lord, or what is the place of my rest? Hath not my hand made all these things?

Which of the prophets have not your fathers persecuted? And, they have slain them, which showed before of the coming of 'the Just One.' Of whom, you have now been the betrayers and murderers; who have received the law by the disposition of angels, and have not kept it."

Yet, those listening to Stephen's words that day had "ears that could not hear and eyes that could not see" the truth that was placed before them. The same hatred that crucified Christ, stoned Stephen! And like those at the foot of the cross, Saul stood with their coats at his feet, as a prosecutor of their faith.

Afterwards, with an even stronger conviction of his legalistic interpretation of scripture, Saul solicited the position of bounty hunter for the courtroom of the Sanhedrin. Gaining the authority to search throughout Judea, he and his henchmen sought to persecute and prosecute all those like Stephen who followed '' the way."

But in the foreknowledge of God, Christ could see something in Saul that others could not see. He would soon confront him on the Damascus road and create within him a new heart. No longer a man full of hate, this new man called Paul would become the vessel chosen by God to reveal the "Mystery of the Gospel." Though "kept secret since the world began," this singular message would now be proclaimed to all generations; not only by his letters, but by shouting the words of Stephen from the highest mountaintops!

Paul tells those at Corinth, he "speaks the wisdom of God in a mystery, even the hidden wisdom which God ordained before the world unto our glory. Which none of the princes knew; for had they know it, they would not have crucified the Lord of Glory." To those at Rome he says, it is "the mystery which was kept secret since the world began; but is now, made manifest by the scriptures of the prophets."
Struct blind on the road to Damascus, Saul returns from the desert, as the new man Paul. He tells the believers at Colossae: "Whereof, I am made a minister according to the dispensation of God, which is given to me for you, to fufil the word of God; even the mystery which has been hid from ages and from generations, but now is made manifest to his saints." The mystery, which Paul reveals wihin his letters, is the key to understanding every story, every parable, and the intent of God's every intervention into the lives of men. Those letters entice believers to search for the "mystery of his will;" no longer hidden, they now reveal the "mystery of godliness." I`Corinthians 2:7-8; Romans 16:25-26: Colossians 1:25-26; Ephesians 1:9; I Timothy 3:16

Stan Carter, as a seminary graduate, discovered that he had somehow lost his passion for reading his Bible and ministering to church members, who seemed frozen in the pew. He didn't blame them for his lack of faith, because he realized that the real problem stemed from his own unwillingness to set aside a special time each day, to listen for the voice of his Lord.
Then, when he could go no further, he made a decision to stand on the words of John: "But the anointing which you have received of him, abideth in you, and you need not that any man teach you. But the same anointing teaches you all things; and is Truth, and is no lie! And even as it has taught you, you shall abide in Him."
Those words of promise made all the difference; when each morning, the scriptures filled with a new breath of life. Chasing after Paul, the mystery of the gospel seemed to beat within his heart, as he read each of his letters. For the first time, the simplicity which is Christ, brought the rest, and the wisdom, he so desperately needed.
Now, with "eyes that see and ears that hear," he seeks to open that same window of understanding for all those of whom Christ said: "My sheep hear my voice, and I know them, and they follow me!"