A Story of Racism, Genocide and Survival 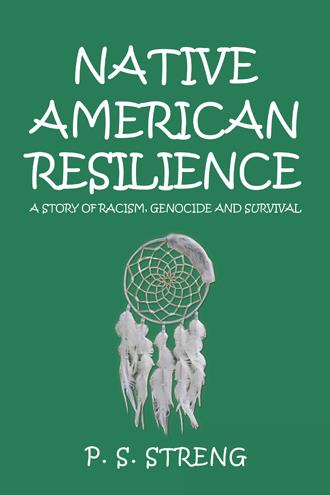 From the Preface: In 1992, as a nontraditional student in my last semester of college, several things happened that changed my life’s interest forever. For a required history course, I selected American History, and that class opened my heart and mind to the real story of American and Indian relationship ... [including that] the United States did not sign the 1948 United Nations General Assembly Resolution 260 against genocide because of the legal implications against the genocide inflicted on Native Americans. It was not until Reagan became president that the U.S. finally signed the resolution and only after it had been significantly altered. These things prompted my decision to write Native American Resilience, and it has taken me almost 30 years to achieve that goal. During this time, I read a plethora of books, magazine articles and periodicals, visited libraries in a number of states and accessed them online as part of my research. I found that my eight years of experience in the 1990’s doing both market and early computer connectivity research for defense products and military records has served me well in this endeavor. At that time, technology was nowhere near the level it is now, and those advancements have enabled me to easily research with even greater depth of coverage. … During these years, I continued working full-time, had my own health issues and cared for my husband through his lengthy fight with cancer. The idea of a book about Native Americans and the racism and genocide they have endured was temporarily put on hold, but the passion for the project and the required research never left me. In 1995, I wrote to Wilma Mankiller, who was Principal Chief of the Cherokee Nation at that time, telling her of my book idea. I still have the handwritten note of encouragement I received from her. Having the Cherokee Principal Chief, someone who personally experienced many of the government’s programs to integrate the Indian into white society, who protested during the Alcatraz sit-in and learned the value of peaceful protest to educate people and who took those lessons back to Oklahoma, willingly give me her support in this endeavor was invaluable to me. … The lives and history of the Cherokee are powerful examples of a proud People, their struggles and their survival. Part I of this book tells about the struggles the Cherokees have endured against racism and genocide since the arrival of the Europeans. Their struggles exemplify the struggles of all Native Americans – their forced removal from their homelands and the outlawing of their languages, religions, cultures and governments. Part II examines the 20th and 21st century laws and regulations of the United States that have forever changed the lives of Indian people. Various programs have been tried by the government to integrate or assimilate them into white society in an attempt to take care of the “Indian problem.” Native Americans are unconquered, and they continue working to overcome the years of racism and genocide. Some of the Indian tribes are thriving in the 21st century, while others live in abject poverty. This is their story. But first, I believe it will be helpful to provide a little backstory. When the Europeans first landed in the New World, they made contact with a few Natives along the coast of islands and the land masses that would become Central, South and North America. From these few, the diseases of the whites spread rapidly, and the native occupants of the land had no immunity to them. Many tribes were reduced by half or greater before the majority of Natives ever saw the first white man. Those that disease did not kill, the whites made war against – robbing, raping, plundering, killing or enslaving those who stood in their path. In the whites’ quest for expansion into a country occupied by over 500 nations of Indians, the concept of “Manifest Destiny” (white belief that continuous expansion was God’s will) was developed and given as logical reasoning for the destruction or exploitation of the Native peoples. The invaders became “We, the People” as wars were fought, treaties negotiated, lands taken and Native people moved. There were times in the late 19th century and early 20th century that the United States government tried programs of acculturation, assimilation or dispersion as a way to bring the Cherokee and all other Native peoples into mainstream America. In 1924, Natives were recognized as citizens of the United States but without a Bill of Rights. However, they were finally given the legal right to their own form of government. The centuries since the first white man came to the Americas have been filled with disease, violence, racism and genocide for the Native peoples. In spite of all this, their story is one of resilience and survival. … In my curiosity and desire to know more about the Cherokee people, which broadened in scope to include other Native peoples, my research and investigation led me to compile and document my findings in this historical account to the best of my resources and information available. It is based on research done by many people over the past 275 years and taken from records even older and more numerous. … Other books have focused in depth on a particular era or subject related to Native Americans. Through their efforts and my research, it is my hope that the reader will gain a more complete sense of the lives of the Cherokees and all Native Americans. Their story continues through time into the struggles of the 21st century. It is my passion and purpose to increase awareness of the centuries of struggles endured by Native Americans. Awareness enables thought and discussion, which will hopefully help to redress the wrongs and increase support for Native Americans as they continue to persevere against overwhelming obstacles.

Many books written about Native Americans have focused in depth on a particular era or subject. Native American Resilience: A Story of Racism, Genocide and Survival has two parts. The first focuses on the Cherokee People – their struggles and survival. Cherokee culture is highlighted, including their oral traditions from earliest time to the confrontation between peoples when the New World was discovered. Trade and treaties played important roles from the early 1600s, with several significant Cherokee leaders guiding their interaction with the Europeans. Starting in the 1700s, laws stipulated that Indian children be educated in the white man’s ways. Native religions, languages and cultures were outlawed, with these basic rights only restored in 1990. Divergent views on removal of Native people from their ancestral lands focuses on the period from the early 1800s until Congress passed a law in 1872 declaring there would be no more treaties. The story of Cherokee removal to Indian territory, their involvement in the American Civil War and the period leading up to Oklahoma statehood in 1907 follows.

In Part II, Native American life through modern times is explored, including issues Natives have within American society and with the government. Although there are treaties still in full force, unless changed by the specific Indian tribe and the U.S. government, many have been abrogated at the government’s convenience, resulting in numerous lawsuits with some significant settlements in money and rights for the Indian people. The government has admitted that terms of treaties have not been upheld and that over the centuries, documents were lost or destroyed. Some tribes and/or their languages and cultures have ceased to exist. Yet Native Americans, the First Americans, continue their fight to gain justice for what has been done to them, taken away from them, equality and respect.

Patricia Streng shares her passion and purpose in Native American Resilience: A Story of Racism, Genocide and Survival to give the reader a researched, substantive history of the centuries of struggles endured by Native Americans. The book covers the racism and genocide that marked the relationship between Native Americans and the colonizers quest for expansion to the racial, economic and legal issues they endured, and still do, as this country developed. Through the depth of her research and writing, she tells this story – one that shows the remarkable strength and resilience of Native Americans through it all. The author has held to her dream of writing this book for almost 30 years, and her research skills and work have been enhanced by technological advancements during that period. This has enabled her to take the reader from earliest times of the historical documents of the United States to those long lost in European archives, up to and including the 21st century, documenting the various programs the government has tried in order to overcome what was considered “The Indian Problem.” Her goal is not only to tell this story, but to increase awareness that while there has been some progress, there is still much to be done for and with Native Americans, the First Americans, to get the justice, respect and equality that is rightfully theirs.