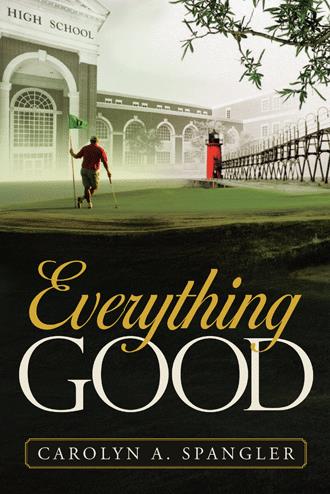 There’s something wrong with me lately. There’s an unease at the pit of my stomach.
Nothing seems quite right. I should be so happy. I’m wearing Franklin’s ring. We’re
going to set a date, if I can ever decide when. Why can’t I just open the calendar and point
to a date? Am I afraid? But why? Franklin is kind and gentle; we have so much in
common. But what if it doesn’t work out? What if I later regret taking this big step?
Maybe it’ll be another big mistake. I have a problem. I need help.

Emily Sanderson sat at her desk, in Room 41 of the English hallway, munching on M&Ms as she read one of the mystery stories her third hour class had handed in that morning. It was good. Very good. The kind of story that made her feel satisfied with her job as a teacher. So good she had forgotten how many M&Ms she had just chowed down.

She’d regret it the next morning, for sure, when the bathroom scales scolded her. But she needed something to keep her going for a while, at least until 5:00. Then she’d have to go home and figure out what she and Katie would eat that night.

She paused from reading and looked around the room. It was a comfortable place for reading. Posters on the wall about exciting novels to dip into, a vase of tulips on her desk, a corner book case, and an easy chair for students to lounge in when they had an extra moment. She liked her room, loved her job, and generally felt at peace. Well, sort of. It would be better, she was sure, once she settled the issue of Franklin and marrying. Marriage the second time around could be scary. What if it was a disaster like the first time? Or again, what if it was hundreds of times better?

Then Emily looked down at all the waiting papers; she could have lugged all of them home, but she thought if she got some out of the way now there would be fewer to stare her in the face that night. And Tom was coming home from Chicago this weekend. She always looked forward to seeing her son and wished he lived closer. She was hoping there would be lots of time to discuss his future plans; he had hinted at some changes coming up.
Emily glanced out the window at the clouds and hoped snow wouldn’t come again this weekend. It was almost spring. The weather man seemed to have the seasons mixed up lately. The problem was the road between Chicago and Springton, where Tom would be traveling. Right at the bottom of Lake Michigan. It could be windy and treacherous if it was snowy.

She picked up the paper again. The girl in the story had just discovered a body. A surprise. Good for the author, Emily thought. She, the reader, hadn’t seen it coming. She finished the story, jotted a few positive notes on the paper, and gave it an A.
Then she came to Marco’s story. It felt thin; it was. Only three pages long. Not a good sign. As she read, she found it to be about a father who had left the country without telling his family why. Marco wrote a note at the end saying that he had had no time to finish because of family responsibilities. Hmm. What was that all about?

Just then Emily heard a key unlocking her classroom door. She put the story down, startled, and wondered why no one had knocked.
Ralph, the custodian, peered around the corner, looking as surprised as she felt. “So sorry, Mrs. S.,” he said. “I really need to clean the room.”
“Could you give me half an hour?” Emily asked. “Then I’ll be out of your way.”
Ralph frowned as he pulled his gray shirt down over his protruding belly. “I suppose so. Hope I don’t forget.” Then he backed out the door.
You better not forget, Emily thought. Sure wish we had Jose back. He was so much nicer than grouchy Ralph with the scraggly brown beard. And the attitude, like he was too good for the job. Which could be true. He seemed much older than most of the custodians. Anyway, Jose would have stopped to chat and even ask why she was working so hard and so late.

Jose. Emily thought back to Marco’s essay. Jose was Marco’s dad. Interesting. Was Marco writing a story about his dad?
Unfortunately Jose had temporarily left at Christmas break. His mother, who still lived across the border in Nogales, Mexico, was ill with cancer. Jose hadn’t seen her in years because of all the problems crossing the border. He had to end up going by himself, since his wife couldn’t leave the country and ever expect to come back. Jose hated to leave her and the kids behind, but he really needed to see what he could do to help his mother. Fortunately the school had agreed to hold his job open for as long as he needed.

How he must miss his family, Emily thought. And how Marco must miss his dad. She hoped that someday the laws would change to help people like Jose. She didn’t know their entire story, but she suspected his wife had come illegally to the U.S. years ago, perhaps as a youngster.
Emily shook her head as she wrote a comment on his story. “Good start,” she wrote. “It sounds like there are many problems to solve.” And then she added this: “Come and see me; let’s talk about how you could finish this.”

Her problems seemed minor after thinking about Marco and Jose. Suddenly she heard what seemed to be angry whispers in the hallway. She looked over at the door in annoyance. It would be so nice to finish just a little more before heading home. Naturally Ralph hadn’t closed the door all the way. She walked over quietly to see if she could tell what was going on.

“I’m getting sick of your blackmailing me,” the person said, obviously trying to not talk too loudly.
“Who cares,” Ralph snarled at the other person.

Who was Ralph talking to, Emily wondered. Another custodian? Surely not a teacher. For some reason she couldn’t move. She didn’t really want to hear the conversation, but it might look funny if she suddenly closed the door.
“I just don’t have the money now. I’ll get it soon.”

Sam. Emily thought she recognized Sam’s voice. He was a custodian in the freshman wing; what was he doing over here?

“One more week,” Ralph said. “And then watch out.”

“Look, I came all the way over here to talk to you; can’t you give me a chance?

Then she heard footsteps stomping off down the hallway.
Emily walked back to her desk, thinking she’d had enough for one day. She wouldn’t be able to concentrate after what she had just heard. Might as well go home.

In this Christian cozy mystery, the characters are trying to understand God’s plan in their lives. High school teachers Emily and Franklin, in this small Michigan town near Lake Michigan, work on the puzzle of finding a dead custodian in a closet. Ralph, the custodian, has done an excellent job of making everyone in this high school disgusted and fearful of him. So who finally comes to his wit’s end, enough to get rid of him?

There are four main characters: Emily, an English teacher, Franklin, a social studies teacher, along with Emily’s two children, Katie and Tom. The book is told from the perspective of these people, one chapter at a time. Each character goes through important life issues, but the mystery ties everything together.

There is romance in each character’s life, and two approaching marriages. One character discovers the saving power of Jesus. One character is able to show compassion and Jesus’ love as he ministers to many diverse people in a hospital.

One reader writes: “There are interesting characters and relevant topics skillfully woven through this murder mystery. Also there are lots of twists and turns and intrigue right to the end.”

Carolyn A. Spangler received degrees from New York University and Western Michigan University. She taught high school English, along with Creative Writing, for twenty-five years and developed a strong desire to become an author. Writing is her passion, along with drawing Christians’ attention to relevant issues. She currently lives in Tucson, Arizona, where she continues writing her fourth book.