Zucchini the Elephant Goes to Sleep 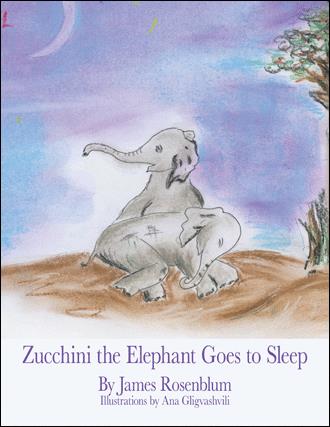 The two elephants stared at the sky and began to count. “One, two, three, four…” They soon reached ten, and Cauliflower dropped out from counting. Zucchini continued on to twenty, but saw there were still many more stars in the sky. “There are so many,” said Zucchini. “More than twenty.” “Yeah,” remarked Cauliflower, and the two of them stared up in silence.

Zucchini and Cauliflower are two young elephants and best friends. At nighttime, they look up at the stars with wonder. When Zucchini gets scared at night, his parents are there to teach him how to make sure there is no danger.

About the Author: James Rosenblum created the characters of young elephants Zucchini and Cauliflower to allay the fears of his young son at bedtime. This first Zucchini and Cauliflower book is his first children’s book. He works as a classical pianist as well as a land use and trial lawyer. He has degrees from Yale University and Columbia Law School. He lives in Massachusetts. About the Illustrator: Ana Gligvashvili, illustrator, is the wife of the author. She is a classical pianist with degrees from Mannes and New York University. A self-taught artist, she has drawn since an early age, and was commissioned to illustrate the characters of Zucchini and Cauliflower for her first work on a children’s book. She lives in Massachusetts.